Trending Stories from The Marquee
You are at:Home»Katherine Dodds»Review: Bob Schneider at the Aggie Theatre 6/21/13
By Marquee Magazine on June 22, 2013 Katherine Dodds, Live, Live Reviews, Reviews 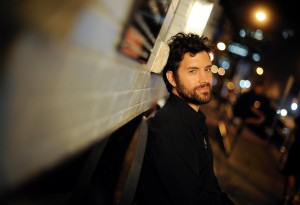 A Texas-born musician, Bob Schneider bought a performance one could refer to as inviting and exciting or incredible and mind blowing. Schneider’s abilities with his guitar, keyboard and trumpet shock even the smallest crowd, as he shifts from one to another with ease, singing softly between. The excitement relies upon his abilities and his absolutely interpretive lyrics, masked by either an inappropriate expression or a sigh of relief.

I first heard Bob Schneider when I was in eighth grade, a long time ago, and there was one song that still sticks in my mind today. Although most of his songs play off of dirty jokes and hilarious tunes, “King of the World” is one song that makes you sit down  and really think about your life and what you’re doing with it. Schneider brings such a presence that he is worth seeing no matter what you have scheduled – take a moment to get away and take in his idiosyncrasies and sweet, soft, attractive guitar. The performance at the Aggie Theatre in Fort Collins may not have pulled in the largest crowd that I’ve seen there, but everyone who was there sang along to every word and screamed loudly in serious enjoyment through every moment. So, I suggest if you see his name listed anywhere, and you’re looking for a talented, versatile instrumentalist and singer, step away, listen and enjoy.