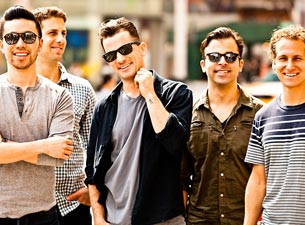 Of a Revolution consists of a number of members, all with the ability to put on a show completely by themselves with their own instrument and probably still sell out a venue. Most of O.A.R.’s band members grew up together in Maryland, attended college in Ohio, and then began their debut as a band together. Many of their earlier songs are written about their experiences together growing up, and the songs connect you to your own growth and cause you to look back upon your life, your friends and the person you love and how you came upon that person.

Red Rocks presents a magical experience no matter who is performing. Anyone who has climbed the hill to sit upon a rock bench knows how the music surrounds you – the fact that you’re sitting on a piece of rock doesn’t create discomfort, rather a connection to the environment. And at every moment you can look above, see the open sky, breathe the outdoor air and the music you hear is only intensified in beauty by the outdoor experience.

If any band is worthy of playing this venue, I believe Of a Revolution deserves to stand upon that stage and experience the beauty of the amphitheater. After a few of their songs, lead singer Marc Roberge looked out upon the crowd, laughed and said “Chris forgot to tell me to say hi. I just get so excited at Red Rocks I forget… I’m looking at this rock and it’s perfect.” There was a connection between him and the audience that only intensified the energy of the crowd; because everyone there was excited to be there, and excited to be sharing this concert together, including the artists.

I believe when an artist gets so excited to be somewhere, the way that Marc did, it makes me feel extremely graced to be in their presence, sharing that moment with them.  Part of O.A.R.’s performance that I always feel exemplifies what wonderful performers they are, is the respect that they give to each other. During at least one of their songs they bring focus to each one of the band members, allowing the audience to see the love and respect that they have for each other as musicians and as friends.

They’re on the stage together to share something they love to do with people who love to see and hear it, and they’re just as excited as the crowd is to be there. The entire horn section, which is three of the band members, danced during almost the entire performance while they played, and the crowd danced with them. O.A.R. has the ability to connect to a crowd unlike many other bands I have seen, and the surprise I received from the crowd was that there were people of all age groups at this show, which I didn’t expect.  Knowing how long O.A.R. has been together, and how long ago the release of their first album was, it was incredible to see so many different people of so many different backgrounds and ages together enjoying the same music.