Trending Stories from The Marquee
You are at:Home»Brian F. Johnson»Vandaveer’s Involvement in the 78 Project Fuels an Entire Album of Murder Ballads
By Marquee Magazine on June 1, 2013 Brian F. Johnson, Features, Interviews 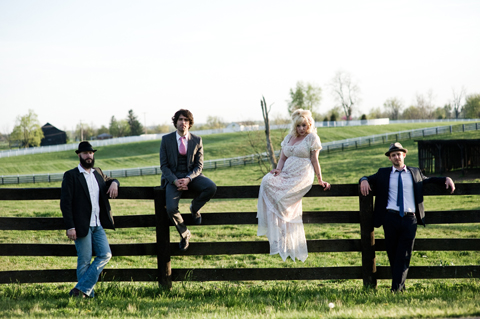 Alan Lomax, the famous field collector of American folk music known as “The Man Who Recorded The World,” spent his life traveling the world recording musicians and was ultimately responsible for bringing legendary musicians like Woody Guthrie, Pete Seeger, Muddy Waters and Lead Belly, to the radio. Lomax passed away in 2002. But his passion for recording musicians has inspired others to continue searching the attic and basement of the American folk tradition and in 2011, filmmakers Lavinia Joes Wright and Alex Steyermark co-founded The 78 Project.

The basis for The 78 Project is simple: have an artist pick a classic song from the public domain to perform and record and put their own personal spin on. They use one microphone and a 1930’s direct-to-disc Presto recording machine — kind of the analog ProTools of the 1930s.

And that is where the Washington, D.C. group Vandaveer comes in. In 2011, the acoustic quartet which features vocalist/guitarist/songwriter Mark Charles Heidinger and vocalist Rose Guerin, participated in The 78 Project, recording the old murder ballad “Banks of the Ohio” at Ye Olde Carlton Arms Hotel in New York City. “It’s this amazing hotel in New York where every room is decorated by a different artist. We went in and picked a room and set up and recorded our version,” said Heidinger during a recent interview with The Marquee. The recoding comes off as an amalgam of Heidinger and Guerin’s personal favorite versions of the song, with him leaning toward the arrangements of Johnny Cash, Ralph Stanley and Doc Watson, while Guerin leans more in the direction of The Blue Sky Boys’ rendition.

“It was so much fun to do that by the time the recording was done, it felt like a bit of a letdown,” Heidinger said. “We wanted to do more. It was such a joy prepping for that, that we figured why not make a whole album of these songs. And later that spring after some planning, we found ourselves in Kentucky on this beautiful farm working on this album.”

The group gathered in a 200-year-old house outside of Lexington, Ky. and started piecing together a full album of classic songs. “We lived there. We were drinking coffee there in the morning and wine at night in his spectacular manor for a week, week-and-a-half and it was the most pleasant recording experience we ever had. It was really a wonderfully creative process,” said Heidinger.

While the band was in good spirits, the group began to notice a theme, and while they hadn’t set out to do so, it turned out that the majority of the songs they had chosen were not just songs from The American Song Book, but specifically, murder ballads. “Banks of the Ohio,” “Pretty Polly,” “Omie Wise” and “The Murder of the Lawson Family,” to name just a few.

Ironically, the final result Oh, Willie, Please, released in early May, sounds upbeat, melodically speaking, compared to Vandaveer’s last full-length, 2011’s Dig Down Deep. “The songs, or the melodies aren’t dreary or melodramatic, its just that the stories are dark and gritty and sort of gruesome,” Heidinger said. “That juxtaposition, I think, is part of the reason they’re really interesting songs to begin with, and people are fascinated with the darker side of the human condition. It’s why the most memorable character in most books and movies is most often the villain. Like Javier Bardem in No Country For Old Men. Pretty much every character in every Cormac McCarthy novel is basically the cousin of all of the villains in any of these songs,” he said, laughing. “People love a good murder ballad.”

And Vandaveer loves a good opportunity to do a great video. Directed by Jared Varava, the production on “Pretty Polly” is phenomenal in recreating the events that lead to the classic song, and incorporating Vandaveer’s haunting presence fully into the track. Heidinger said that the video continues on a tradition of the band being blessed with their videos. “We are very lucky to know people who are very gifted with film,” he said, adding with a laugh, “I can confidently say that we should not be allowed to make such videos. Our level of success does not warrant such productions but we’re not going to turn them down. We’ve been able to work with thoughtful filmmakers who have been able to make really nice pieces of art that are also, conveniently, promotional material for us. We hit the video lottery. It’s a lovely thing to be a part of.”