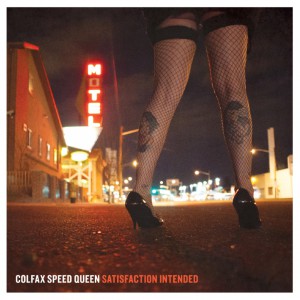 Garage rock has a bad reputation of being a genre for the talentless, but Colfax Speed Queen adds a level of slickness and musicality to their otherwise punk inspired rock that gives their new album a depth not often found in punkier undertakings.

At the heart of that structure are the kaleidescopic keyboards that give the band a decidedly psychedelic edge. The track “Mean Street,” for example, almost sounds as if The Doors’ Ray Manzarek was sitting in with The Stooges. The Denver quartet’s  prowess doesn’t stop with keys. The track “Ponies At the Altar” showcases one of the better guitar solos ever filed under “punk.” And that may be just the key to Colfax Speed Queen’s sound. Instead of being a punk band that added in other elements, it sounds as if CSQ started as a rock band that kept leaning more heavily on punk songwriting.

Their songs, like “N.R.A. a ok?” and “Five Foot Cell,” aren’t angry, per se — they’re still irrevrent and flippant with enough cathartic fuzz to vent their frustrations, but they don’t take it too far. Colfax Speed Queen knows how to beep the horn to get listeners’ attention, but in contrast to some of their influences, they don’t continue to lay on that horn to the point of annoyance. It’s a good balance.                           — BFJ