Trending Stories from The Marquee
You are at:Home»Album Reviews»Head For The Hills ‘Blue Ruin’
By Marquee Magazine on July 1, 2013 Album Reviews, Brian F. Johnson 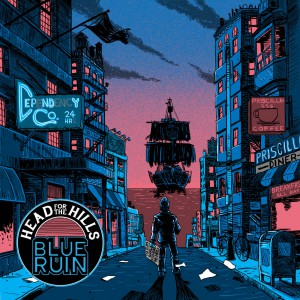 Head For The Hills has undergone an incredible maturation in recent years and their latest album Blue Ruin shows the band playing some of the best music they ever have, with a confidence and smoothness that they have only hinted at until now.

Hearing the Fort Collins-based quartet on this album  is kind of like seeing your old college drinking buddy dressed up in a tie on the way to the office. That’s not to say Head For The Hills has put away the fun, they’ve just tightened their songwriting and their presentation into a solid, well-rounded package.

As purveyors of modern bluegrass, Head For The Hills spent their early years pushing the limits of the genre and finding where they fit in that broad spectrum — and like that old college buddy, they can still lose the tie and throw down, like they do on “Never Does” and “Lover’s Scorn.” But they can also tuck that shirt in and rip through splendidly crafted instrumentals such as “Priscilla The Chinchilla.”