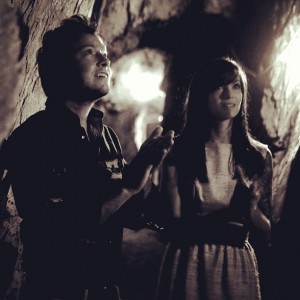 On the eve of Independence Day, I found myself at the music venue staple Larimer Lounge within the ever developing north downtown district of Denver. On the agenda, a night of sweaty blues.

The main attraction – for me – was Little Hurricane, a San Diego-based duo I first saw last fall on a festival stage in Telluride.

But it was Denver’s own Calder’s Revolvers who opened the night and broke out of the gates like a steel train, prefacing their set with “LET’S DANCE!” Music to my ears. The six-piece band was full of energy as they rolled through tunes ranging from Black Keys-styled heartache blues to Elvis Costello-inspired Brit rock all mixed primarily with upbeats and varied tempos. A sucker for horns, my knees went weak as I shimmied about with the surprising instrumental addition of the saxophone, and later things got low when organ keys were laid heavy for a hint of funk. The set ended in time for a patriotic patio view of the city’s fireworks display.

The cozy confines of the lounge provided for an intimate experience of Little Hurricane whose stage setup seemed fairly straight forward. A lady, Celeste Spin on drums, and a gentleman, Anthony Catalano on guitar, with a vintage lamp on a desktop behind that flickered with the rise and rest of the music. Upon closer inspection though, revealed a DIY arrangement to include a drum sample machine for Spin and a makeshift frame to hold a steel guitar on which Catalano used homemade slides from wine bottles. An old time microphone jutted from the contraption, yet sadly appeared more for show than differentiating audibility. The intentional haphazardness of it all melded organically with the performance’s sound.

During one song dedicated to her brother, Spin donned a mando as she belted “give ‘em hell,” then flipped the fiddle to her back and took the sticks to the drums in front; the two-man band pulled no punches while pulling double duty.

Sultry and sexy tunes poured like whiskey, as cowboy boots sat next to the kick drum which was played barefoot by Spin as Catalano’s black on black on black ensemble was subtly dramatic. Sweet and sincere were the pair as they thanked the audience for our niceties as mellowness and minimal conversations were clearly realized.

With only a brief break to wipe sweat from their faces, the couple returned to provide a few more for the road, finishing with an extra super slowed down version of “Money,” as if to reiterate their definition of dirty blues among red and white hues of the all-American night.