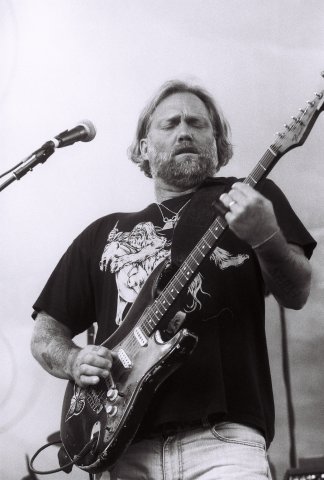 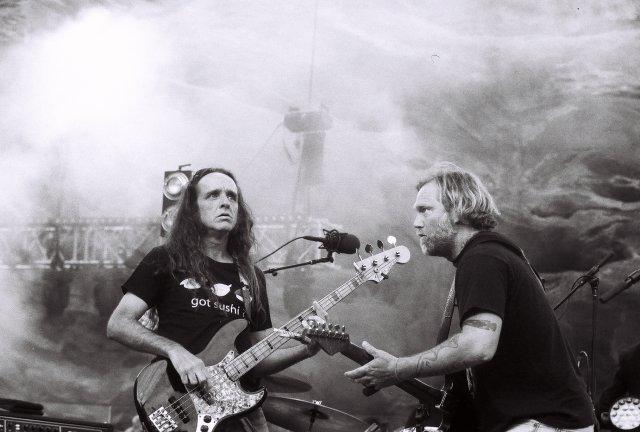 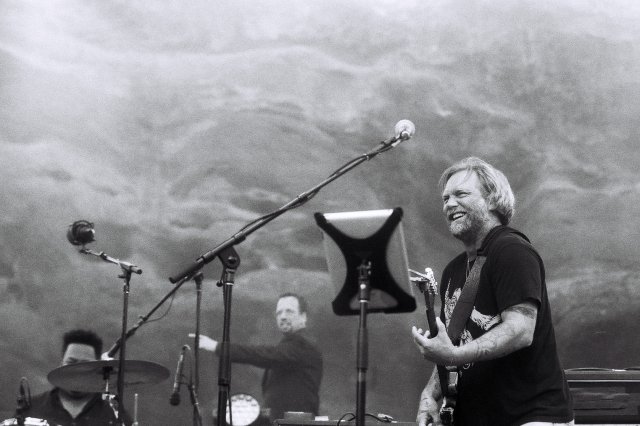 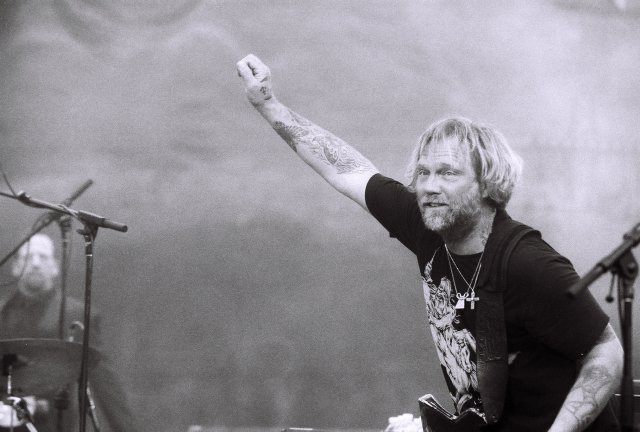 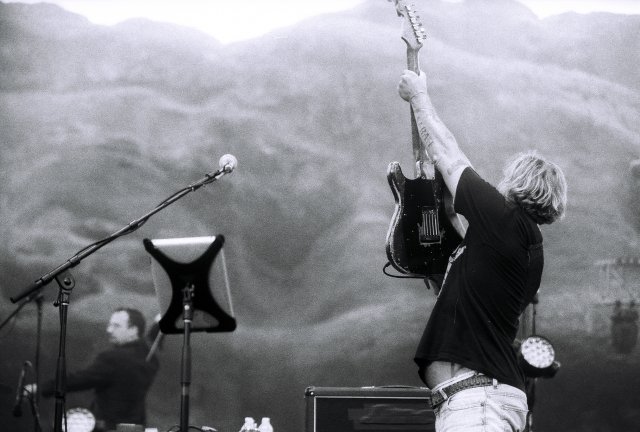 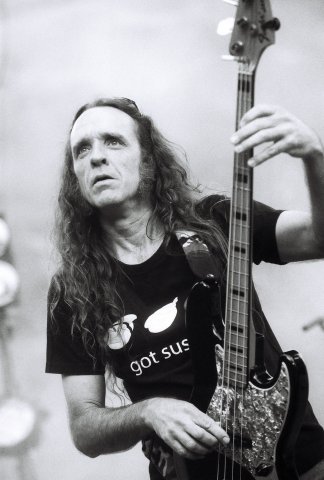 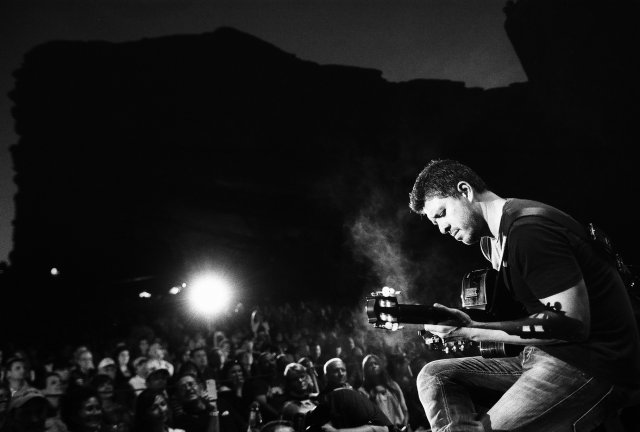 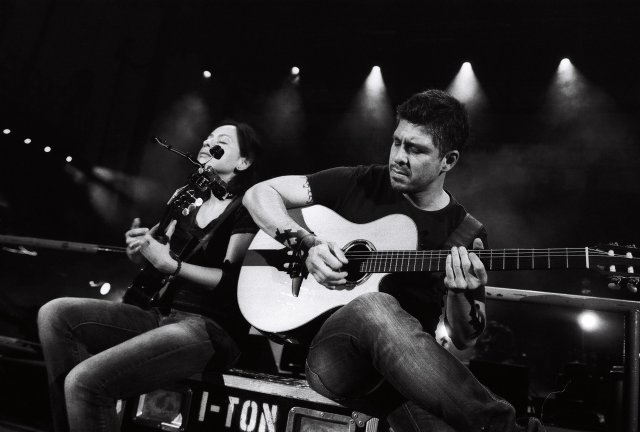 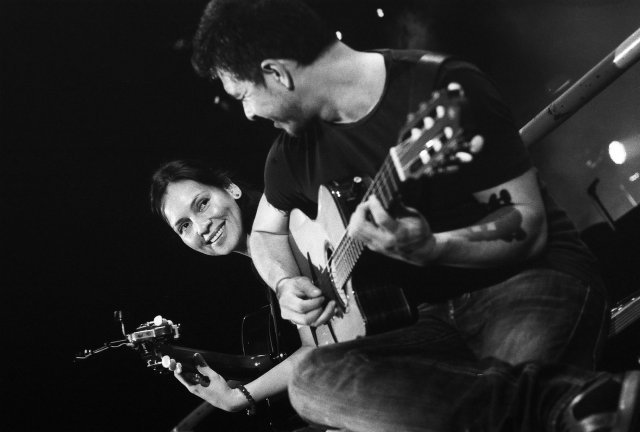 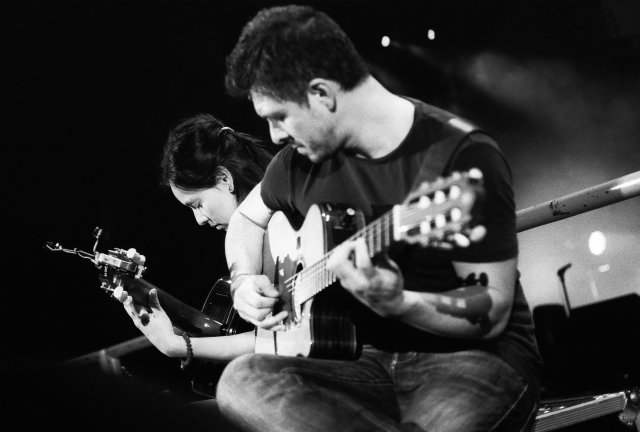 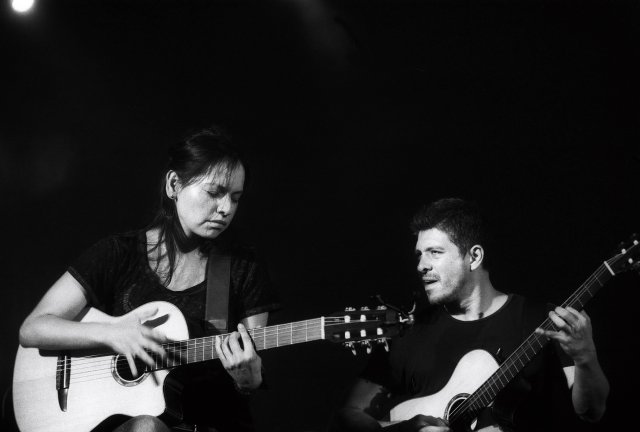 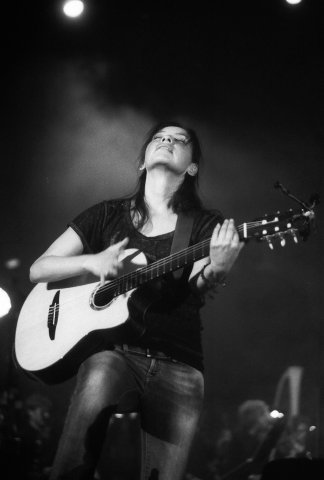 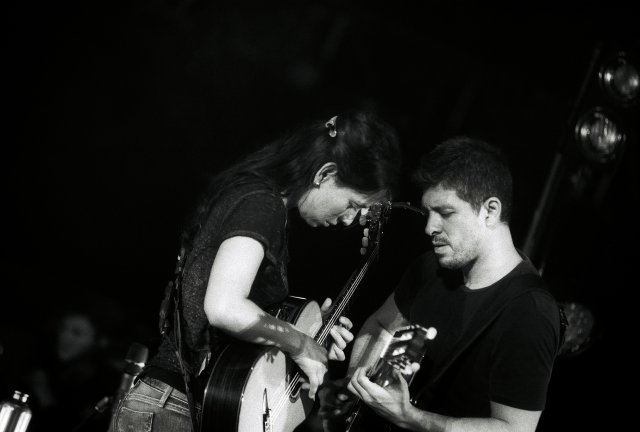 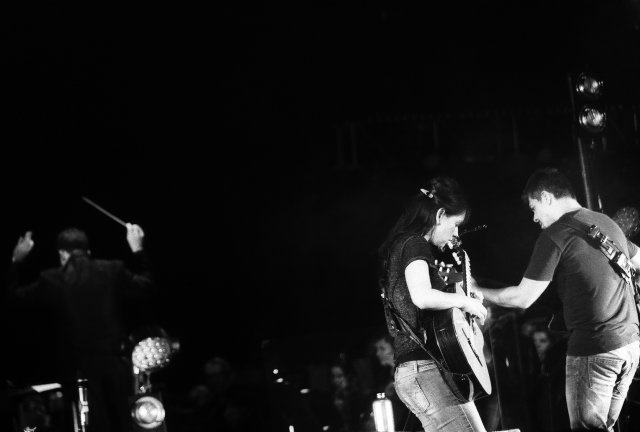 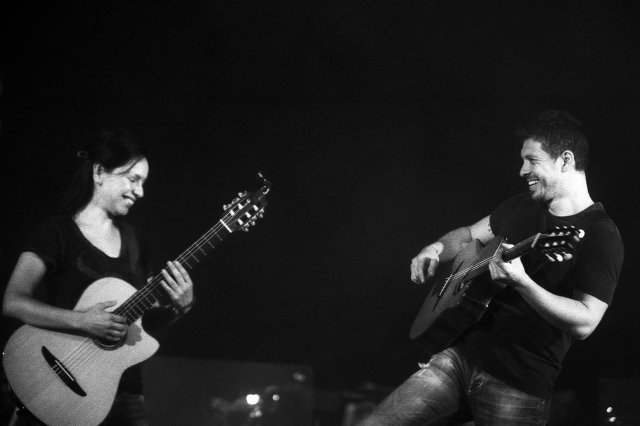 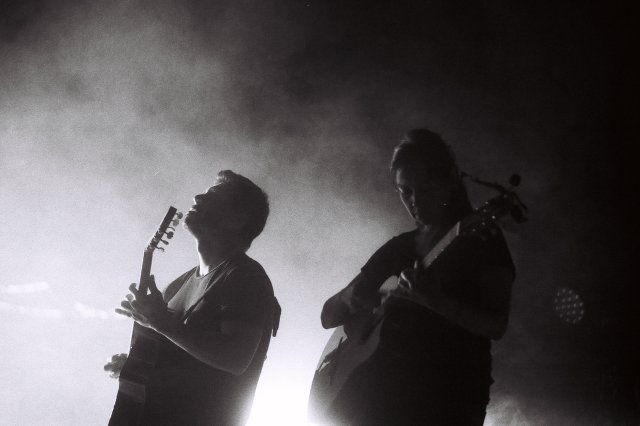 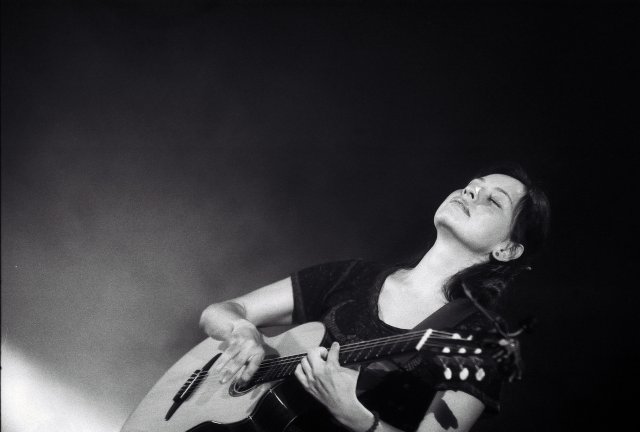 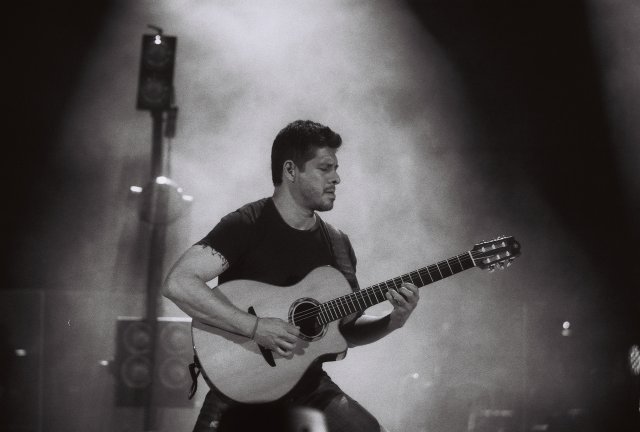 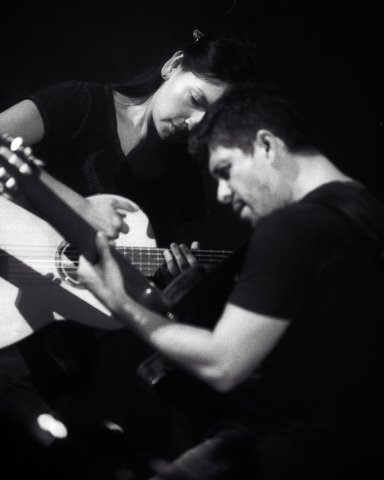 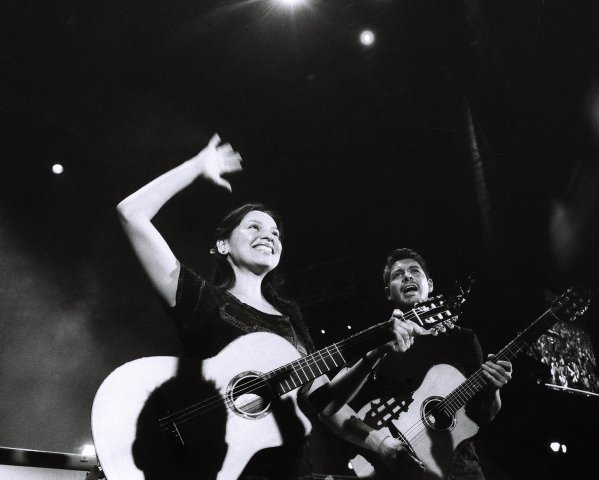 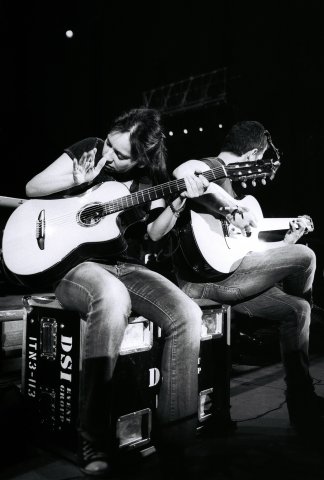 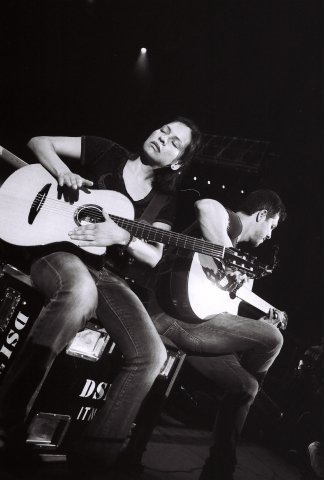 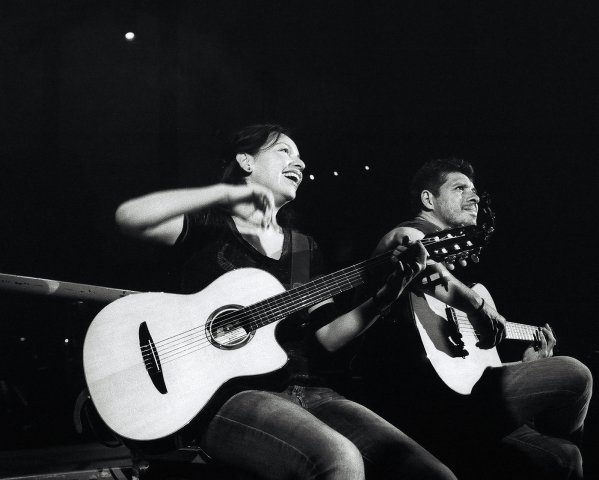 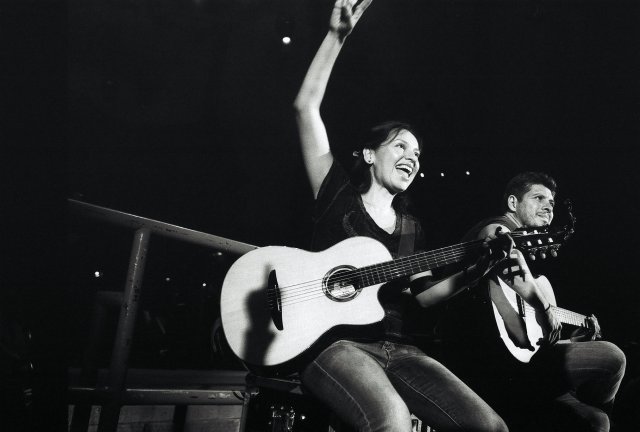 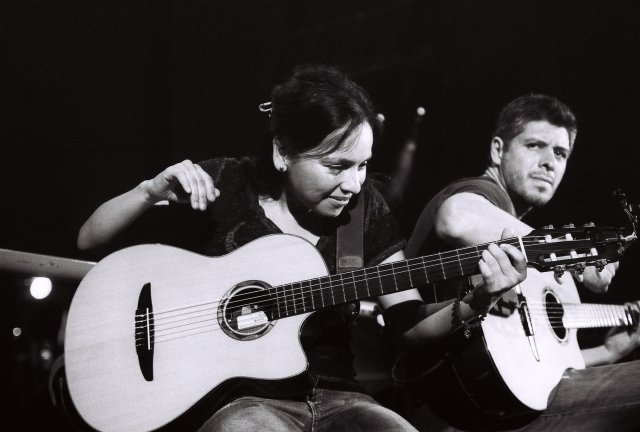 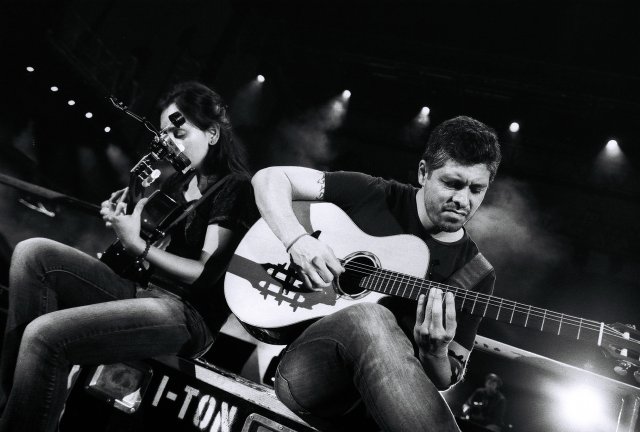 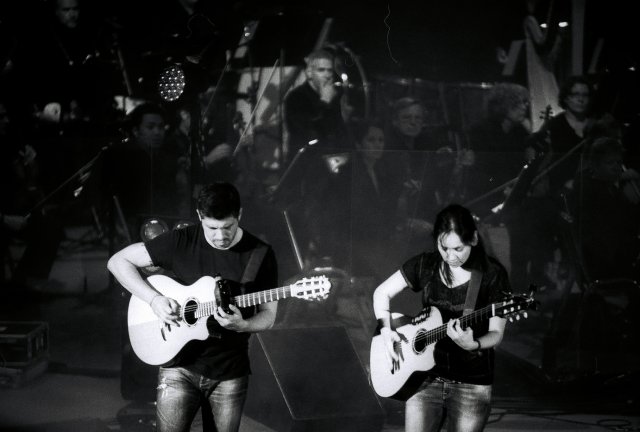 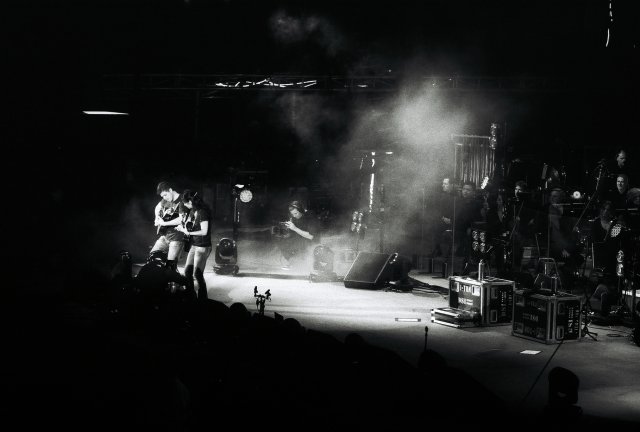 The threat of rain loomed heavy on the minds of those waiting in eager anticipation for the show. From Boulder to Littleton, the foothills were awash with overcast skies and drizzle filled air. Any other time it would be a welcome change from the smoldering heat of the dry Colorado summer. But Sunday marked the day when Rodrigo y Gabriela would be playing with the Colorado Symphony Orchestra at Red Rocks Amphitheatre. While shows in the past have gone on through rain and foreboding weather, not so for this show, as the orchestra must have certain conditions so as not to damage their instruments. So it was with great relief that a mid-afternoon sun and fortuitous weather prevailed for the rest of the evening.

Upon my arrival, Anders Osborne was playing a bluesy version of Crosby Stills Nash and Young’s “Ohio.” Accompanied by the Colorado Symphony, he performed the classic protest song with a feel that was unlike the original. In the middle, the symphony sat back and let Osborne and crew noodle for a good five minutes, jamming out in a spaced way. Jumping back into the chorus, the symphony rejoined and collaborated to create an elaborate finale of an old folk song. Osborne then finished solo with the Colorado Symphony for his final song “Higher Ground.” Leaving his guitar, Osborne and the Colorado Symphony joined in unison for a prolific final song. With the emotional lyrics and passion behind his voice, Osborne let it all out as he finished his part of the evening at Red Rocks.

As dusk began to fade and the embrace of night came upon us, Rodrigo y Gabriela came on stage. Without the symphony, they played in an intimate manner, sitting close to the crowd as the house video cameras showed their intricate and unique guitar playing. The duo were matched in dress, both wearing a simple black T-shirt and blue jeans. It was hard to see from row 27 just how talented these two guitarists were. Thankfully the house video cameras were in HD quality and showed the duo’s amazing handiwork as they slapped their guitars to create the beats that accompanied their intricate guitar picking. With an array of musical influences; metal, Celtic and latin guitar, Rodrigo y Gabriela have created their own blend of music that’s unlike any today.

Gabriela is a master of manipulating her guitar to create rhythms and sounds that shouldn’t come from an acoustic. The cameras showed her focus as she hypnotically tapped and hit her guitar to create beats that would rival any jazz drummer. The two fed off each other like symbiotic beings, pulling and pushing each other in directions that created layered soundscapes. After a couple songs the two left the pit to return to the stage. Rodrigo grabbed the microphone, addressed the crowd and thanked everyone for coming to witness the amazing collaboration with them and the symphony. His breath was labored as he spoke, no doubt a result of the high-altitude of the venue, but with each word was genuine joy as he looked at the crowd and amazing scenery for which he was playing.

The duo then returned to playing by themselves for another three songs. Sometimes sitting on roadie boxes and other times walking briskly across the stage. They played with insurmountable energy no matter where they were standing or sitting. Sometimes Gabriela would sit on the roadie box, strumming and beating her guitar in rhythmic unison as Rodrigo paced the stage, posing in anthemic rock guitar style.

Finally the main course, so to speak, was delivered and the Colorado Symphony Orchestra joined the duo on stage after their sixth song. Rodrigo y Gabriela are a magical duo who create amazing sounds out of just two acoustic guitars. But with the added backing of the orchestra, their music was elevated to a whole new level. It was a teaming that matched perfectly. The dueling guitars strumming fiercely as the woodwinds and the stringed instruments created a blanket of complementary sounds to accentuate their unique style. As the songs moved from mellow, melodic rhythms into building climaxes, one could see the conductor dancing and hopping in time on his pedestal as he led the orchestra into swirling heights of musical euphoria.

After a few songs, Rodrigo left the stage as Gabriela dazzled the crowd with her magnificent guitar playing prowess. Playing solo without the symphony, she showcased her unique ability to drum on her acoustic guitar as she played fantastic fusions of guitar. Everyone, including the symphony, watched in amazement as she manipulated her guitar in ways unimaginable. The house video camera captured her movements in high-definition and showed them on the screen for all to see. Her fingers and hands moved almost too quickly to see as they raced across the fret board and bounced off the body of the guitar.

A few minutes later, Rodrigo returned and once again collaborated with the symphony. And just to show that he’s just as talented as his counterpart, Rodrigo showed the crowd his skills as Gabriela left the stage and the symphony sat in silence. He started by drumming on his guitar, all knuckles, bouncing in crazy time signatures yet creating infectious beats. He sat on the rail of the pit and strummed his guitar as only he could. One is not better than the other. They both possess unique abilities to manipulate their acoustic guitars and create sounds and rhythms that befuddle and amaze at once.

As with all things in life though nothing is perfect. The indecisiveness of the crowd was somewhat bothersome. Because of the range of styles that Rodrigo y Gabriela play, moving from slow to fast tempos, the crowd didn’t know whether to stand or sit. If the song started off slow and Gabriela and Rodrigo sat down, the crowd would take their cue and sit, only to stand again once the song picked up its rhythm. It was a minor inconvenience to an otherwise magnificent night under the stars at red rocks. One could even see fireworks on the horizon out east as the duo played on the stage.

It was an amazing night of music with the symphony and the masters of acoustic guitars. This reviewer would have liked to see more of the Colorado Symphony with the duo, as they only played around seven songs together. But understandably so, as it is Rodrigo y Gabriela’s show. The amazement on the duo’s faces and in their mannerisms throughout the show reflected that of the crowd’s. What many thought would be a rainy, cold, possibly canceled evening turned out to be a magical night of musical amazement.