Bob Dylan did not approve press credentials for the Americanarama Festival at Fiddler’s Green Amphitheatre. What follows is a review by a paid ticket holder. 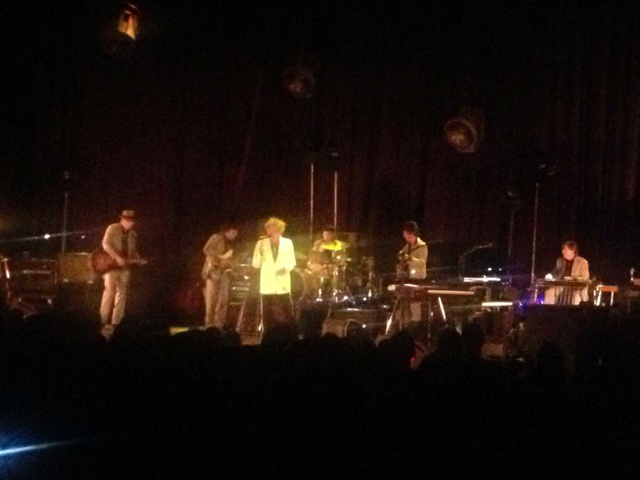 Everyone bitches about Fiddler’s Green Amphitheatre. It’s sort of the whipping boy for Denver music venues.  Forget about the less than quality sounds, or the fact that shows end early, or the fact that beers are an ungodly $12+. Based on traffic alone, I hate the place.

We had left with plenty of time to spare to get to the show on time, but Denver’s wonderfully flowing traffic patterns thwarted all efforts to get there in time to see Ryan Bingham.  And, since the pat-down at security was equivalent to a TSA cavity search, the fact that we arrived there in time for My Morning Jacket didn’t stop us from missing the first song.

I understand the economics of packaged tours like this and why it makes sense for a promoter to put these bands on the same stage, and I understand that when you’re a band like Wilco or My Morning Jacket and you have the chance to go on tour with Bob Dylan, you jump at that chance. But Americanarama, while a good idea on paper, was not the best in reality.

My Morning Jacket, who last year, played one of my top all-time favorite shows ever at Red Rocks, needs space to breathe. They’re one of the best live bands touring anywhere in the world these days, but not when their sets have limitations. Given the fact that they had only an hour and half was a big dis-service to the group, but as the sun cooked the less than half-full amphitheater, the band still managed to pull off some strong performances of songs like “The Way He Sings,” “Wonderful,” “Golden” and “Victory Dance.”  The set lacked some of the je ne sais quoi that the Jacket normally brings and I think a lot of that was based on the fact that lead guitarist Carl Broemel didn’t have the time to launch into any extended solos — none of the band members did, in fact. It was an o.k. set, but it was a festival set, for sure. Short, tight, to the point.

Wilco, on the other hand, seemed to do a bit better during their allotted time. Possibly boosted by the gorgeous double-rainbow that hung over the back of the venue after a brief sprinkle, the band seemed comfortable throughout their set — never feeling like they were holding back or being abbreviated. A magnificent version of their formerly just solo acoustic song “Remember the Mountain Bed,” saw new dimension with the group giving it a flushed-out, full band sound. Their astounding track “Art of Almost” was as heavy as if it were their own full show. And the certain highlight of the set was when they were joined by members of My Morning Jacket for a blistering cover of Neil Young’s “Cinnamon Girl.”

Throughout the evening it was pretty clear that a good chunk of the crowd, which did grow to almost capacity by the time Dylan came on, was mixed with folks there to hear Jacket and Wilco, and those who were there to see Dylan. All around me, “older” people sat quietly during Jacket’s and Wilco’s sets, looking as if they were impatiently awaiting who they had come to see, while conversely, we saw masses of “younger” fans exiting the gates before Dylan’s set started.

Now let’s be clear, here. My reverence for Bob Dylan as a poet is off the charts, and my respect for his monumental contributions to American music, and music of the world over the last five decades is immeasurable. But the man isn’t fucking God, and I think that the pedestal he’s been placed on is so high that it’s swaying in even the slightest breeze these days. Dylan has famously always shunned press and for this show he didn’t allow any photographers. What’s more the staff of Fiddler’s were on high alert and spent much of the first few songs loudly and obnoxiously shutting anyone down who held up their phone for a picture. Really? You’re going to spend half of a song yelling at a 60 year old woman for snapping a picture on her phone? News flash: Having a team of ushers running around doing that, is disturbing to everyone! It’s way worse than if someone just snapped a photo. Again this man isn’t so almighty that he can’t have his picture taken, especially by fans who are paying nearly $100 a pop to see his show.

Dylan’s band was rock solid, but truth be told they paled in comparison to Wilco and Jacket. Neither Dylan, nor his band seemed like they were there to entertain. They were just there to perform, and it caused an obvious detachment with the crowd. Everyone knows he’s famous for being unintelligible, but even on “Tangled Up In Blue” a song I’ve heard hundreds, if not thousands, of times, there was no chance to even remotely sing along.

We left right after “Tangled Up” along with a very large crowd of others and I can’t imagine the show having turned around much from there. But I do regret missing “Desolation Row.”

And, like many, many people said last night, if they had ditched Dylan and done several nights together at Red Rocks, it would have been epic.

Tangled Up In Blue

She Belongs To Me

All Along The Watchtower

The Way he Sings

Don’t Do It (w/ John Oates and Ryan Bingham)