Trending Stories from The Marquee
You are at:Home»Features»Baroness is Stitched Back Together Tighter Than Ever After Bus Wreck
By Marquee Magazine on August 1, 2013 Features, Interviews, Joe Kovack 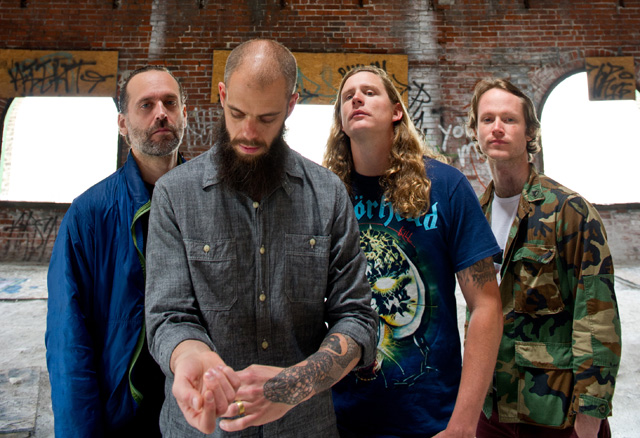 It was a moment frozen in time. A single moment stretched ad infinitum. A moment created out of the chaos of life, without purpose or reason, but a moment that facilitated an emotional, physical and spiritual response. It was everything and nothing at once. A blip in the fabric of time. And almost as soon as it arrived, it ceased with the crashing of glass and bones as the bus dove head first into the English hillside.

The tour bus lay helplessly in the ravine; shock, dismay and fear spread as band members took stock of the damage to their bodies and to bandmates who had been catapulted around in the early morning accident. John Dyer Baizley, lead singer and guitarist of prog metal purveyors Baroness, was up front with the driver that fateful morning — the morning that would change everything for the band. “It’s one of those experiences that stays with you, plagues you in a way. But the most immediate thing that I felt, in that little time stop/flash of a moment, was this sense of isolation. I felt alone,” Baizley admitted in a recent interview with The Marquee.

In the blink of an eye, Baizley  was flying into the windshield as the bus careened off the hill. After a moment of eternity, he regained his wits, feeling the broken bones in his arm and leg and the sense of insecurity that enveloped the crew. “It’s being alive and suffering the immediate pain of being alive, feeling all those feelings and sensations just after something traumatic, it had a physical effect, a mental effect. It’s actually quite enlivening. My sense of things was that could’ve been taken away. And you know, it’s better to feel something than nothing at all. And I guess that’s sort of what I was on the verge of — nothing at all,” Baizley recalled.

The accident occurred on the morning of August 15, 2012 while in support of their latest release Yellow & Green. Traveling from Bristol to Southampton, England, the bus lost control of its brakes and plummeted down a hillside in Monkton Combe, U.K. Only four weeks into the tour, expectations and anticipations to play their new album were deflated instantly. It was a moment that could’ve destroyed the band. Bones were broken, as were spirits. After toiling and laboring in the studio to create a new direction for the band, it was taken away before they could show it to the world.

But to everything there is a silver lining. Tragedy can unite, it can solidify perspectives on life and create awareness in ways unimaginable. “Some people have mentioned that we were unlucky. I disagree entirely. In a way, it was great that we all went through that together. ’Cause you can’t really talk about that sort of experience with people who haven’t experienced it themselves. It can give you an isolated feeling. But thankfully, we were in that wreck with eight of our good friends,” Baizley recalled. “And lo and behold, a year after the fact, we’ve become closer friends. All those inspirational speeches, all that mumbo-jumbo stuff I always heard growing up, came true in a heartbeat. If you have some fear, you have to truly embrace it and engage it in order to get past it. And that’s been very true both in the moment of the accident and in every moment since.”

Two massive titanium plates, 20 screws, 18 inches of wire, and 50 staples to close a 15 inch incision was needed for the left arm of Baizley. But miraculously, he was playing his guitar again within a few weeks of the accident. Learning his playing hand was not permanently damaged, Baizley affirmed to get back to full strength and return to the road. While a tragedy of this magnitude may deter some, the desire to play again usurped any fear. “I immersed myself in my microcosm of gray area, neither white nor black. It’s like, ‘Yes! My arm is still on my body, and I still have a pulse.’ So that’s the good thing. And the bad is that there’s a whole lot of immediate pain that comes with it. I’ve always tried to look at things in a very realistic way. Because it’s easy to focus on the negative, just as it can be simple to say, ‘Oh, we just got to find the good in this,’” Baizley said. “Understanding the power that that physical, mental and spiritual impact had on me, allowed me to not be overly positive about it, but also not to get bogged down by anxiety, stress or fear. Just to get on with life. To look forward to some new tragedy or something new that’s exciting. But realistically speaking, what does it mean to look forward to touring again in the condition I’m in?”

After 10 years of touring and writing music, the methods of creation for the band had become boring and rote, forcing them to think outside the box, which for Baroness meant taking a more traditional approach to writing music. The result was Yellow & Green, 18 songs spanning a little over an hour which the band will finally get to play in the U.S. for the first time since the accident. The new album is full of jovial instrumentation and heart and shows enormous growth for the group. “It was kind of a point of pride for us that we didn’t do the whole verse, chorus, verse chorus thing,” Baizley admitted. “But we started looking at more traditional song structures as the ambitious step for us — more personal songwriting and repetitive choruses. And that’s what Yellow & Green is, airing our musical laundry, a lot of ideas we shelved because they were, in our minds, too normal. And in doing it we realized that sort of thing wasn’t normal for us.”