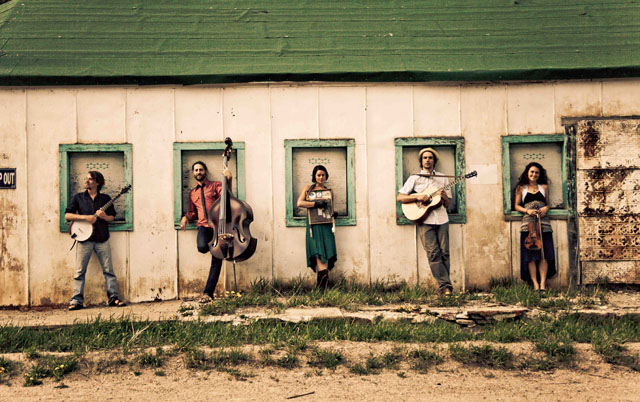 “I always pretended I was playing with an orchestra and now it’s really going to happen,” said the delicately spoken, wide-smiling vocalist, washboard and musical saw player Bonnie Paine, during a recent group interview with The Marquee. “It’s extremely exciting. My whole family is coming out. They’ve been watching me play that imaginary game [of having an orchestra behind me]since I was like five.”

Paine and her bandmates in Nederland’s Elephant Revival were only a few days away from their first rehearsals with the Colorado Music Festival Orchestra when she explained that all of the band members were nervously excited to figure out how adding 25-plus musicians to their quintet was going to work out. “All of the songs have been extended a little bit and some of the parts have changed a little bit. One of the composers wanted to do an acappella song that I sing, ‘The Raven Song,’ and that’s never been accompanied by any instruments and hardly any voice. So that’s going to be interesting. I’m going to pay a lot of attention to our conductor. He’s kind of our unifying piece, besides listening as best we can. So we’ll be using our eyes to play,” said Paine, who then giggled an admission that she predominately plays with her eyes closed. “I think I’ll know how much I can close my eyes after we rehearse. But most of the pieces that were chosen, I’ve imagined with an orchestra. I’m using my imagination skills a lot. I’m excited to see what happens.”

Elephant Revival will play with the orchestra as part of the Colorado Music Festival’s Mash-up series, which seeks to expand the scope of classical instruments by performing modern arrangements. Last month, the series paired portions of Radiohead’s OK Computer with four movements of Brahms first symphony.

“It’s like two dreams coming true in one performance,” said bassist/vocalist Dango Rose, about playing with the orchestra in Chautauqua’s historic auditorium. “It’s really a dream come true for all of us, but Bonnie has been imagining this since she was five,” Rose said.

That performance isn’t the only dream that’s becoming a reality for the band this summer. On September 3, the group will release their latest album — their fourth full-length — These Changing Skies. The album, which they recorded this winter at Bear Creek Studio, not far from Seattle, Wash., is a phenomenally sophisticated, hauntingly gorgeous masterpiece for the group.

As the title suggests, the theme of the record is about adapting to the ever-changing world with grace. “It’s about being constantly aware of the movement of change and readying yourself for those changes, and how you choose to go through your day-to-day life,” said Rose.

The 12-song album was recorded last winter, during which time the band spent three-and-a-half weeks living and recording at Bear Creek. “It’s a perfect retreat. There’s magic in the walls of that barn,” said Rose. “It was built with the intention of having music played inside of it, and so much music has been played there over the years that when we got there the wood was just buzzing.”

Paine, Rose, guitarist/vocalist Daniel Rodriguez, and banjoist/guitarist/vocalist Sage Cook all contribute songs to the album and fiddler Bridget Law turns in a remarkable performance on the instrumental track “The Rakers,” written by David Wiesler. The group’s ability to tap each member of the band gives These Changing Skies a diversity and flow that many groups with fewer songwriters often fail to achieve. And the band flawlessly transitions from one songwriter to the next, allowing each member a moment out front, while all working together to achieve a continuity that never makes the diversity sound choppy. “That was one of our precursors of getting together almost seven years ago, now; to share in the experience of supporting each other’s creativity in music,” said Rose. “That’s shifted and changed a little bit as we let the music guide us, but it’s really a natural coalescence for how the songs got chosen on this particular album. It’s what really felt right at the moment with the energy and performance of the tune.”

Since Elephant Revival played their first official gig together at the Gold Hill Inn in 2006, the group has stepped further and further away from their origins, which was once heavily focused on and influenced by bluegrass. On These Changing Skies, despite their instrumentation, none of the songs sound bluegrassy, but instead embrace what Elephant has called  “Transcendental Folk” music, a modern folk sound centered around lush harmonies, brilliant lyricism and impeccable playing.

“Bridget is the only Colorado native in the band and we all united here in Colorado, and I think that mainstream sound of bluegrass, slamgrass, smoke some grass, you know, was a very natural part of our initial influence,” said Rodriguez. “But I think as we’re growing as a band, and as we progress, we’re all really coming back to our initial influences and really finding our voices as songwriters and players as each album comes out. I think I’m really starting to hear our true sound.”