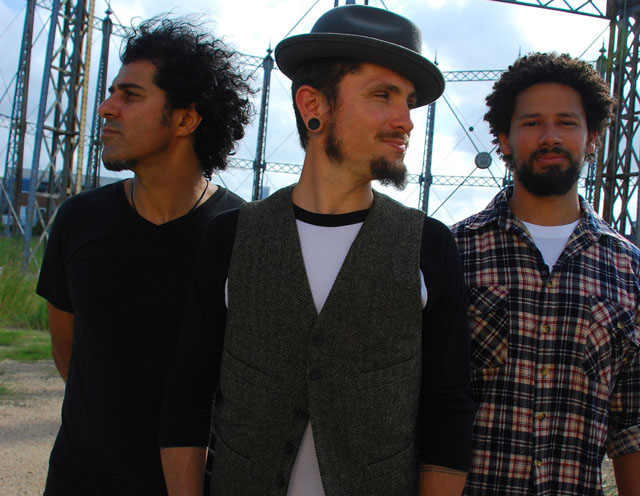 Festival sets are a difficult trick for musicians. Most times, the sets are considerably shorter than their full concerts, and so getting new material into the set list might be difficult to manage. But it’s also a great place to expose a lot of unfamiliar ears to new songs. “People want to hear what they know. But like a lot of artists, we feel like our latest work reflects the best of what we do at the moment. So we’re all here hanging out waiting for the chance to play these songs because we think this is our best offering,” said John Butler during a recent interview with The Marquee.

The entirety of 2013 is shaping up to be a 365 day lesson in patience for Butler and his trio, who late last year recorded their highly anticipated follow-up to 2010’s April Uprising. The trio recorded the as-of-yet untitled disc in December, 2012 at Butler’s studio The Compound in his hometown of Fremantle, Western Australia, but it may not hit shelves until early 2014.

“We decided not to put it out this year for a whole bunch of reasons,” said Butler. “We wanted to make some different partners in the States, my wife was touring her album, and our bassist Byron [Luiters] was busy with another project. So it was actually a good year to let it breathe and finish off the album and take our time on the mixing part and then hit it up in February.”

Accodring to Butler, the 12-song album, which was recorded in only 20 days — much shorter than the trio’s normal recording pace — is a blend between some of his earlier work and the material that appeared on April Uprising. “On my last album, I really wanted to explore bare bones song arrangements and production. I wasn’t really interested in extending or exploring through musical movements. I wanted to cut as much fat off as I could. And I did that, and I was really happy with what we did, but when I look back I realized I missed some of those moments. So on this new album I wanted to bring back some of those exploratory movements that the trio does and incorporate some of the songwriting and arrangement sensibilities of the last album. That way, we’re not throwing the baby out with the bathwater, but joining both strong suits together,” said Butler.

The roots/jam maestro, known for his impressive finger-picking and “good vibe” song styles, whose last three albums debuted at number one in Australia, said that looking for new partners in a record label in the States is a big part of the album’s delay, but a hurdle that he’s not willing to hurry through. “We’re making those relationships in America as we speak, and we didn’t want to rush that,” said Butler. “All I care about is passion and finding a way to work together. You can always tell when someone is giving you a schpeal. At the end of the day, we’re looking for a team that believes in the music. Throughout history, passionate conviction has always outweighed how large your gun is, literally, whether you’re talking about wars, political movements or so forth. That’s what I look for.”

Butler knows a lot about that passionate conviction in other realms beyond music. The famously philanthropic activist musician and his wife started the Seed Art Fund in 2005. The Australian-based organization offers grants to practicing Aussie artists across all musical genres in hope that they can turn themselves into self-sustaining artists. And Butler is also heavily involved in a campaign to stop the major industrialization of James Price Point in Kimberly, NW Australia, including the construction of a massive gas hub in that area. “We had some great success there recently,” he related. “There was a big move by BHP, Shell, Chevron, Woodside and a few others who all pulled out of the project because of all of the pressure that we put on them over the last five or six years. That was a major win because that could have opened up the whole area to development.

“And we’ve got the same thing going on that you do here with fracking, this really reckless and irresponsible technology. So we have to keep our eye on the ball, but recently I’ve tried to change the language of that involvement. I try not to use the word ‘fight.’ You get burned out when you fight all the time, and you’re always looking for the next fight. But it’s important to celebrate the culture and the communities that you’re trying to protect. You can celebrate something all day long, but you can only fight for so long,” he said.

And in his musical career, one thing Butler is continually celebrating are the paths he’s made Stateside. “Just because I’m popular in a country with 23 million people doesn’t mean that I’m going to be that in a country with 300 million people,” he said. “But the fact that we’re here is a big deal. You can plant a seed or plant a plant, and sometimes it doesn’t take. Sometimes it dies. But we’ve transplanted a plant — which is even harder — and it’s taken root and it’s bearing fruit and that’s a big thing to be thankful for.”