Trending Stories from The Marquee
You are at:Home»Live»Review: John Scofield at the Boulder Theater 8/1/13
By Marquee Magazine on August 5, 2013 Live, Live Reviews, Reviews 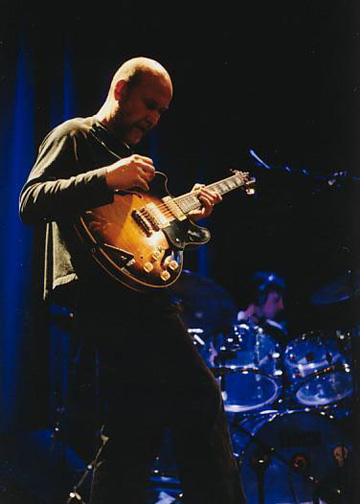 If you created a Venn diagram using the circles “pocket” and “exploratory,” the intersection of these circles would be where the music of John Scofield’s Uberjam Band lies. Throughout the night, the band would flirt with the edges of this intersecting circle, pushing the boundaries of the music all over the spectrum. But during this exploration, the pocket was rarely abandoned, and this made for a night of riveting, grooving music.

Scofield is currently touring with the musicians who played on his 2002 album, Uberjam. The band consists of guitarist/sampler Avi Bortnick, bassist Andy Hess and drummer Adam Deitch. It’s the first time they’ve recorded and toured together in nearly a decade. As Scofield told the audience, he reunited the band “just because we felt like playing music together.”

While it has been a long time since the band has done an extended tour, you’d never know it. The music was as tight as you would expect from a band that plays together year after year. Bortnick’s excellent rhythm playing helped Hess and Deitch keep a pocket that complemented Scofield perfectly, giving him a platform to explore the boundaries of their music to its fullest while always retaining a funky groove.

Their music touched on a variety of styles including funk, afrobeat, fusion jazz and electronica. The set included a good mix of songs from the original Uberjam album as well as their new recording, Uberjam Deux. Highlights included “Camelus,” “Snake Dance,” “Curtis Knew” (you can really hear them quote the theme to Curtis Mayfield’s “Move on Up” on this one) and the tune Scofield called their theme song, “I Brake 4 Monster Booty.”

I enjoyed this show much more than the first time I saw them on the original Uberjam tour back in 2002. My memory of that show was that at times, the band seemed to be a slave to their pedals, and this constrained the music (note: this was my memory of a show 10 years ago – I may be off on that assessment). This was not the case Thursday night. The music was much more free-flowing, and even the moments where Bortnick relied heavily on the sampler, it moved very well. As always, Scofield’s solos were extremely tasteful and his phrasing was impeccable. I’ll take a tasty player like Scofield over a shredder anytime.

If I had to find one complaint about the show, it would be that the band stopped too soon. This isn’t to say that it was a short show. It’s just that I could’ve listened to them play for hours on end and enjoy every last moment of it.