Trending Stories from The Marquee
You are at:Home»Joe Kovack»Review: Wampire at the Bluebird Theater 8/6/13
By Marquee Magazine on August 7, 2013 Joe Kovack, Live, Live Reviews, Reviews 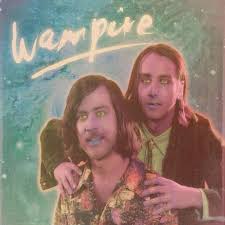 In an age of supersaturation in the music industry, it can be hard to stand out from the seemingly endless supply of new bands that continually emerge. Playing well is just not good enough; you need a shtick, a uniqueness that sets you apart from the completion. Portland-based Wampire understand this principal. The new wave, soft-psych band embody elements of the two ­­past genres, seamlessly fusing them in a way that is fresh and inspired.

Wampire showcased their sound to the Bluebird Theater Tuesday night, opening up for their indie rock contemporaries the Smith Westerns. Unfortunately, the attendance to the show was dismal – maybe a couple hundred people at the most – and that’s being generous. Usually weekday nights are just as packed as any weekend show, one of the many great attributes of the Denver music scene. Yet this was not the case. The empty room left a void in the atmosphere, one that the band surely must have felt. With a crowd so small, every little noise from the crowd could be heard between songs, including the uncomfortable silences that inevitably ensued. Silence between songs is one thing, but whenever a venue isn’t full, there is always the one joker in the crowd who thinks that everyone will love their inane, superficial banter. Guess what, we don’t.

Regardless of the small crowd or the joker between songs, Wampire performed with a budding professionalism. Dressed the part, all in garb that could be imagined on stage in the late 60s and the burgeoning psychedelic scene, they transformed the Bluebird into a veritable psych club for their set. ­Unfortunately a minor hiccup threatened to derail their performance early. After the second song, power was lost to the bass player, causing an interruption of nearly 10 minutes while bass player and crew worked to right the wrong. Lead guitarist Eric Phipps commented that “80s flanger pedals apparently don’t work well,” while lead singer and founding member Rocky Tinder began telling bad jokes to fill the void. One such example was, “How does Moses make his tea? He brews it.” As bad as the jokes were, the crowd appreciated the attempt at levity. Eventually the power was restored and the band marched forth into a cover of German electronic heroes Kraftwerk.

Wampire’s uniqueness comes in the mixture of an authentic psychedelic sound from the 60s with the poppy, new wave beat and synth of the 80s. It’s a combination that defies expectations and works quite well. The droning guitars and distorted vocals are complimented by the upbeat tempo of the drums that remind of 80s staples A-Ha, Duran Duran and Wham. One song that particularly stood out was “Giant” off their debut album Curiosity. The song started with a psychedelic surf guitar accentuated by trippy keys that created an aura reminiscent of The Animals or The Yardbirds. That psych sound moved quickly into the new-wave synth and beats of the first verse, then into a washed out spacey bridge and back to the heavily distorted guitar of the intro.

Phipps and Tinder swapped vocals throughout the set, as both founding members take care of singing duties. Tinder seemed the more prominent front man, with his dark paisley patterned shirt and sunglasses, fostering the image of the iconic 60s. Toward the end of their set, their bass player once again lost power, this time during the song “Spirit Forest.” It was unfortunate as the bass plays prominently in this song, one that lays a groovy, melodic beat to the poppy psych song. The band continued to play without missing a beat as the crew troubleshot the issue.

Despite the minor hiccups, the set was a success. Wampire’s unique sound is one that will work well with the resurgence of new-wave 80s into the modern music landscape. Coupled with the distinctive sound of the classic psychedelic age, Wampire has created their own niche, and one that is surely going to propel them into the musical consciousness.