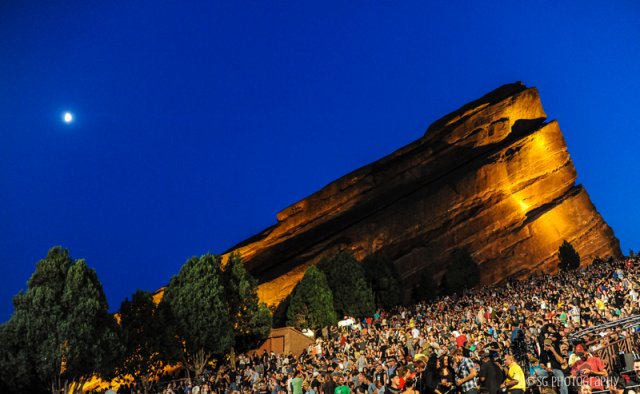 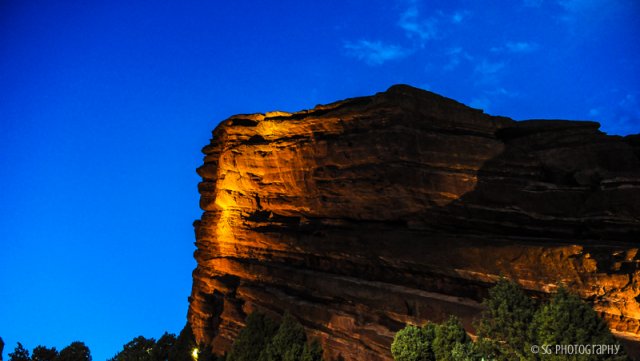 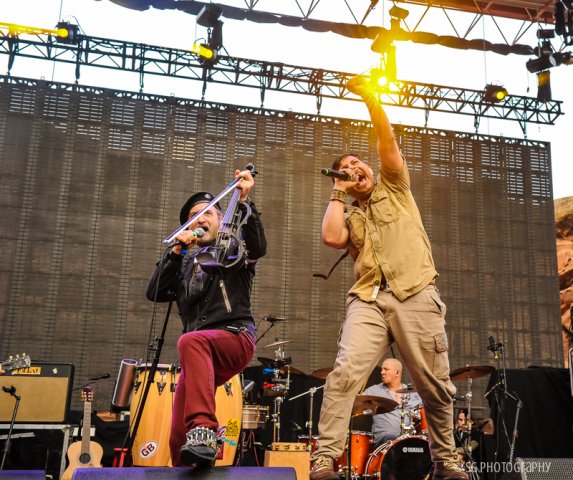 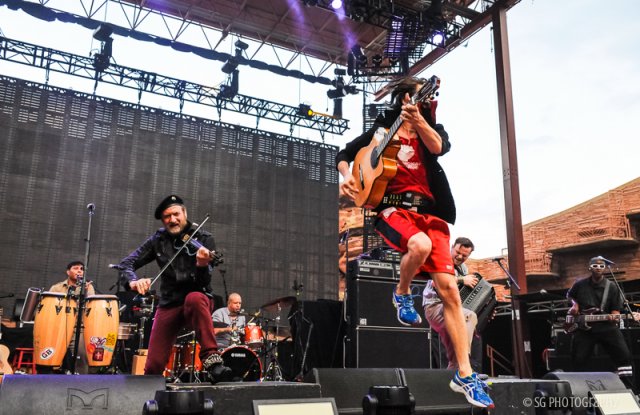 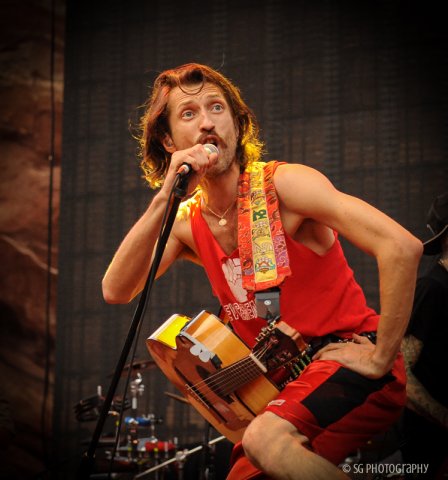 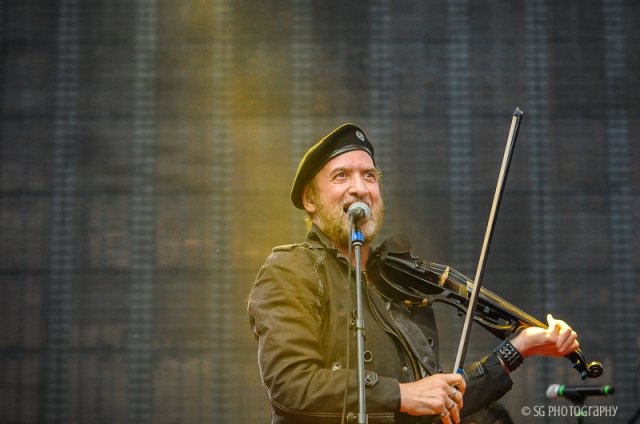 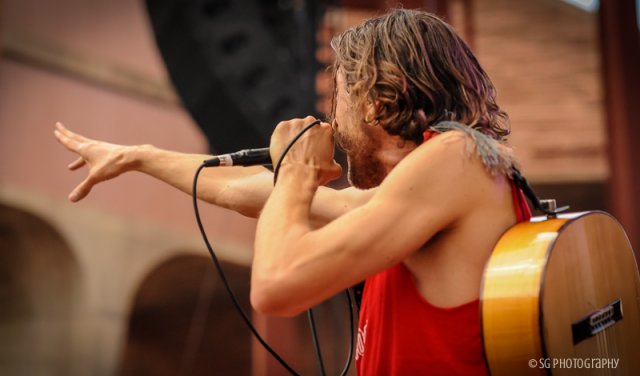 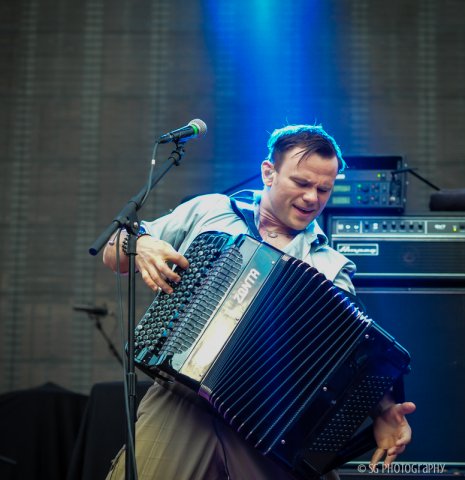 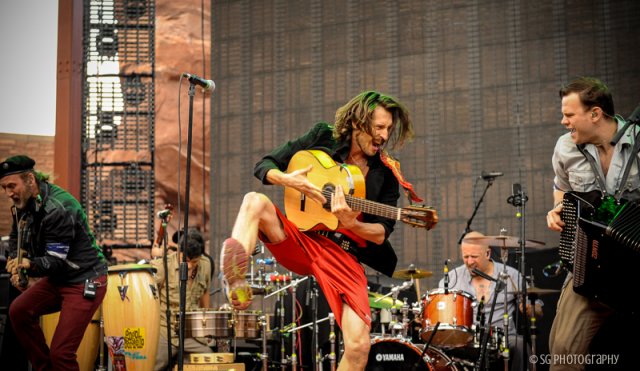 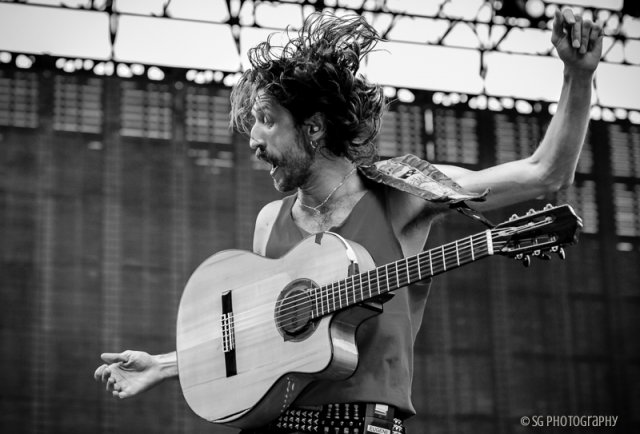 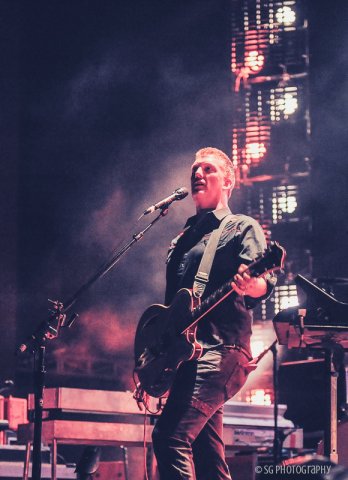 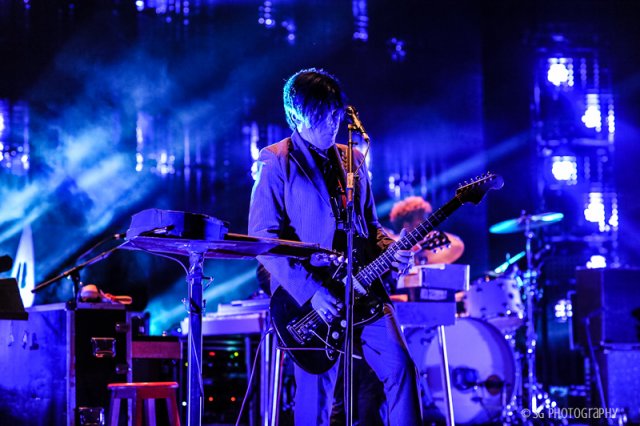 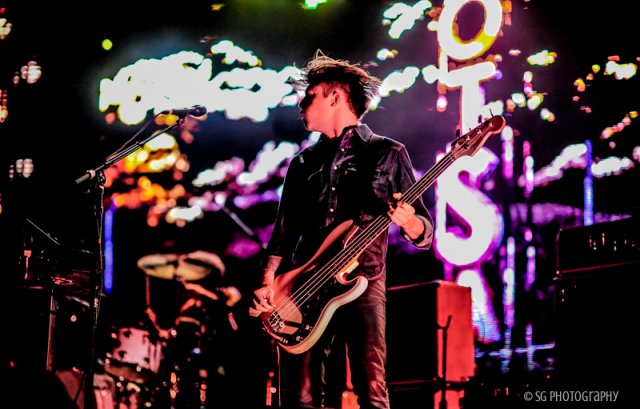 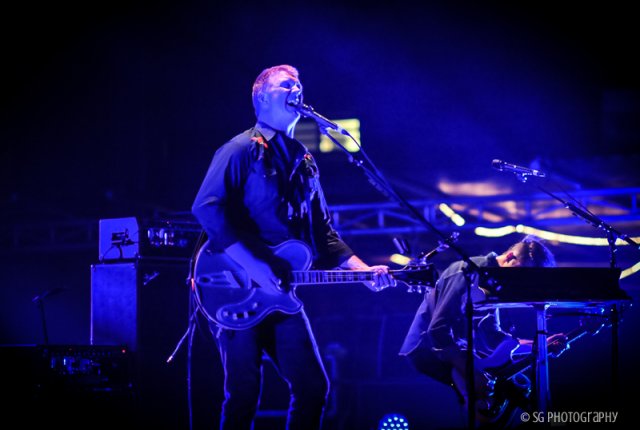 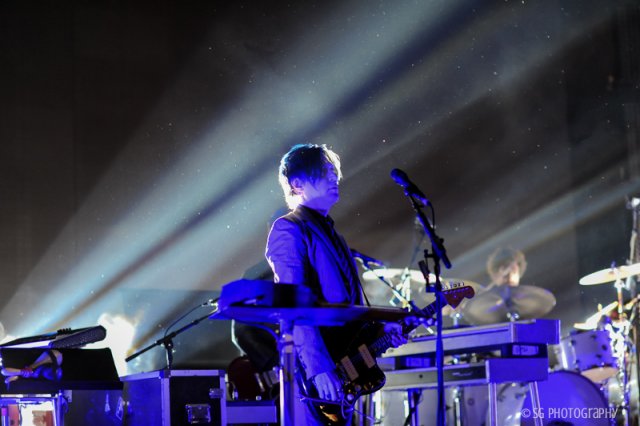 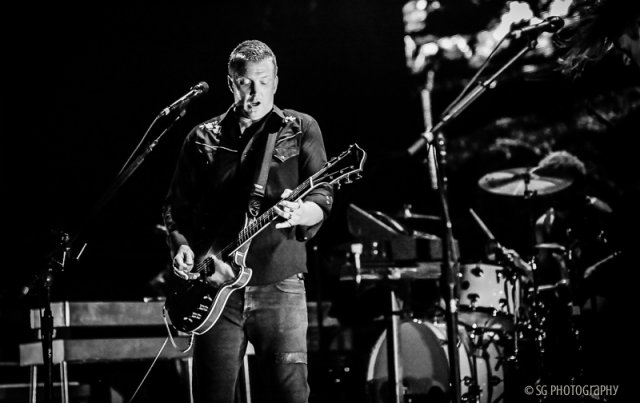 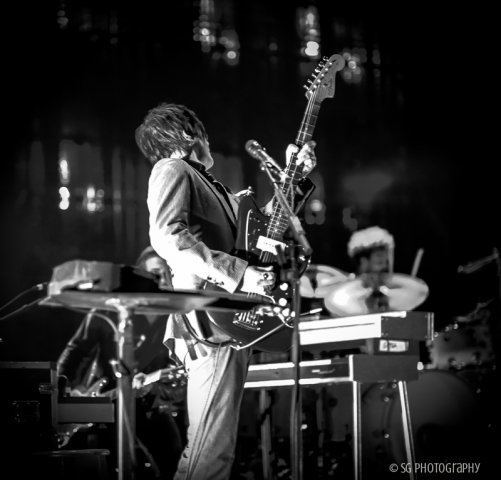 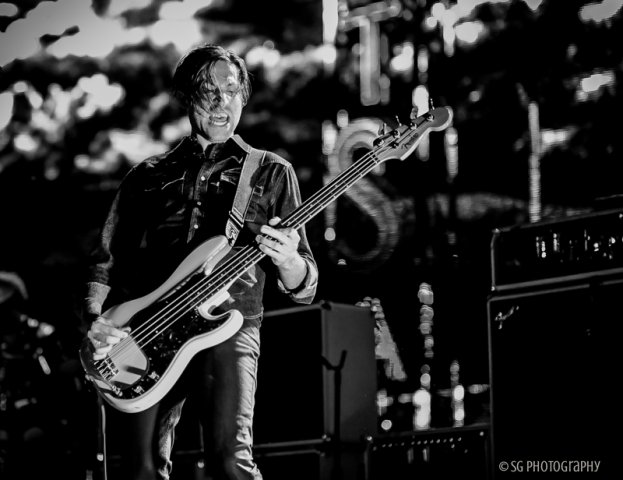 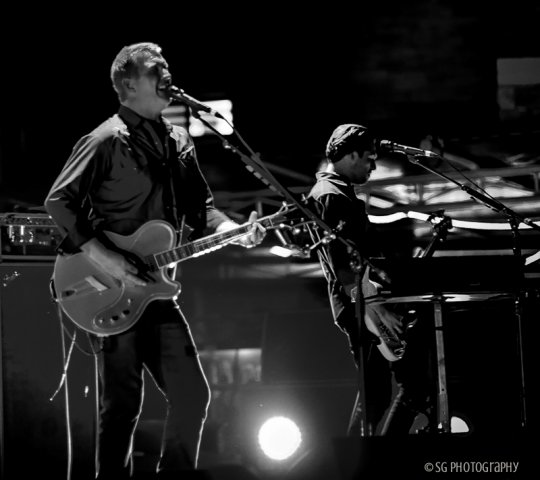 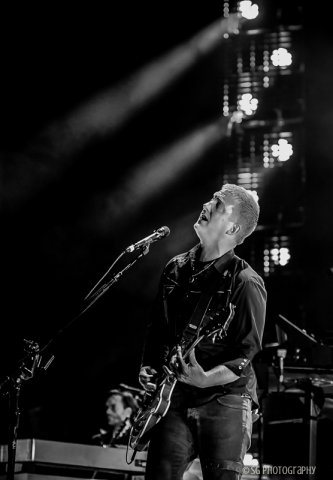 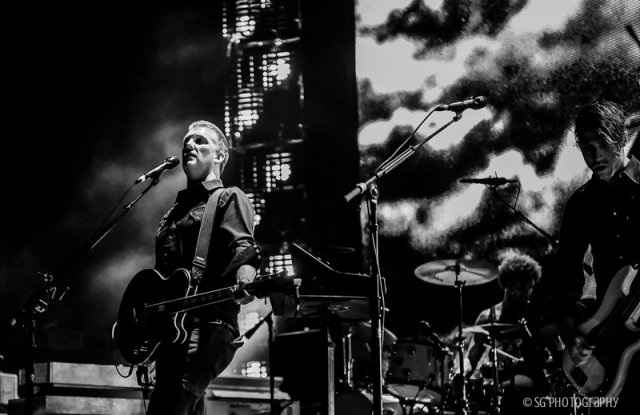 Darkness enveloped the crowd as Queens of the Stone Age walked on stage at Red Rocks Amphitheatre Thursday night. An enormous screen illuminated as the house lights dimmed; showing a pane of glass across its width. As each band member emerged from the shadows, a section of the glass shattered, echoing throughout the amphitheatre. Each shattering was in time with the beginning of the first song “Keep Your Eyes Peeled” off their new album …Like Clockwork. Once on stage, the final piece of glass shattered and they dove right into the song with its ominous, brooding and droning guitar intro. This is perhaps one of my favorites off the new album and it was a great start to the evening by showing a darker side of Josh Homme, as a lot of his material tends to lean toward the infectiously jubilant spectrum of heavy rock.

A longtime fan of Homme and his work since the days of Kyuss, I’ve been somewhat disappointed with his latest albums. They seem to have left his intricate, stoner rock origins for a more poppy and concise version of his former self. Don’t get me wrong, there are some good songs on Lullabies to Paralyze and Era Vulgaris that standout and remind of his glory days, but I’ve always been partial to the earlier albums and Desert Sessions. Maybe it was a result of his busy schedule these last few years, as he toured with his side projects Them Crooked Vultures and Eagles of Death Metal. And Homme had recently gone through some personal trials and tribulations which most certainly contributed to the darker feel for this latest album. Firing his longtime drummer Joey Castillo and overcoming life threatening surgery had certainly added a more menacing and murky sound to his repertoire.

As the first song ended, Homme took a second to look at the crowd and soaked in the enormity of the evening. “God damn you look beautiful tonight,” he said as he looked at the crowd, then quickly moved into the first song from his seminal album Songs for the Deaf “You Think I Ain’t Worth a Dollar, But I Feel Like a Millionaire.” Homme was wearing a black western long sleeve shirt; you know the one, with little red roses stitched at the top of the chest. They then jumped into “No One Knows” from Songs for the Deaf. A large tower with the letters QOTSA like the call letters for a radio station showed on the screen behind the band. Foreboding, dark clouds moved across mountains as a lonely road could be seen in front of the tower. It conjured up emotions that moved with the song that was one of their hits back in the early 2000s. After “Burn the Witch,” a danceable song off Lullabies to Paralyze, Homme looked to the crowd again and said “you all are a bunch of dancing, pot smoking, beer drinking mother fuckers. That means you’re alright.” Then an interesting thing happened during the song “The Vampyre of Time and Memory.” As Homme played the piano by himself, the crowd held up their lighters. That’s right, people were holding up lighters like the old days – not screen lit cell phones as I’ve seen many kids do in this day and age. It was a homage to the days of long ago when rock ballads were accompanied by a sea of flames in the audience.

At this point I began to notice a lackluster performance by Homme. He seemed lethargic and only singing at half his potential. I’ve seen QOTSA before and Homme didn’t exude the energy of his earlier years. The set continued to move along in this fashion, with mostly newer songs. A few standouts were “Better Living Through Chemistry” from Rated R and “Make it Wit Chu” from Era Vulgaris and ending the set with “Go With the Flow” from Songs for the Deaf. Exiting the stage for their encore, they returned with “Feel-Good Hit of the Summer,” a perfect song that exemplified the early days of Homme’s signature stoner rock style. It was at this point that this 30-year-old began to exit the venue, as the days of closing out shows (especially at venues like Red Rocks) have become a thing of the past. Since I hit 30 this year, I’ve noticed people my age exiting slightly early to beat the rush of the crowd. It’s ok, as I spent all of my teens and 20s closing out shows to the very end.

It was a good show. Good not great. For a fan of Homme and QOTSA since the late 90s, I was a little disappointed in the lack of early songs. As mentioned above, I’m more of a fan of his earlier work but there were many choice songs off the newer albums. This concert was a showcase for …Like Clockwork, with seven songs of the set being from that album. And with Homme’s energy slightly uninspiring, I would grade this show at a solid B-.