Trending Stories from The Marquee
You are at:Home»Album Reviews»Ryan D. White ‘This Is How We Lose Our Minds’
By Marquee Magazine on August 1, 2013 Album Reviews, Brian F. Johnson 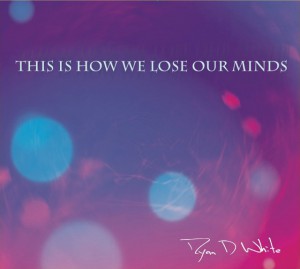 This Is How We Lose Our Minds

It’s not a surprise that a disc with this much heart behind it is also so good.

Boulder musician Ryan D. White explains on his website that his album This is How We Lose Our Minds was his diary and emotional outlet for the period between the birth of his two children — his son, Striker, who was born on June 23, 2010, and passed away the same day, and his daughter Sylvia White, who was born two-and-a-half years later (and is happy and healthy).

Instead of taking the obvious, and most certainly deserved, brooding singer/songwriter approach to the album, White puts forth a record that comes off somewhere between Son Volt and Spiritualized, complete with rocking choruses and synthed-out fuzziness, and couples that with sweet, heartfelt and optimistic lyrics throughout.

On “Comet In a Sea of Stars” White sings, “Now every night, a bouquet of stars is thrown across the sky. That’s our little boy Striker, and he’s trying to catch your eye. Just remember, you’re a comet in a sea of stars, it’s no wonder that your boy would want to be an astronaut.”

Typing that line made me tear up, but the real beauty of the album is that it’s not sad. White sings these wonderful phrases in such a positive tone that he is able to easily show his gratitude for the short time he did have with his son, and the blessing of his daughter and his wife. “I got music in my ears and a heart that bleeds and the woman of my dreams is in love with me,” he sings on “Every Day,” before ripping a solid guitar solo.

The album is exactly 45 minutes long, and White explained that it was no accident — it’s precisely the length of time that his son spent on this planet. “I learned a lot during those forty-five minutes,” White wrote on his site, “and it’s my hope that listeners willing to open their hearts and take the journey will find some wisdom or comfort in this story that started out about death and loss and has ended up being a story about unstoppable love that transcends worlds through the power of music.”

I’m crying all over again. It’s a beautiful story, and the album doesn’t falter under the intense pressure of properly relaying the story with dignity, reverence, and most of all, hope.         — BFJ