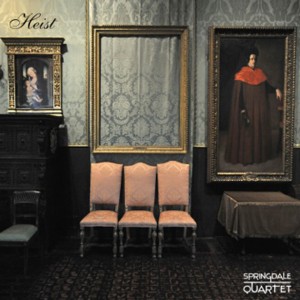 Springdale Quartet may be a local Boulder-based group, but they sure as hell aren’t acting like one.

The group brought in Alan Evans of Soulive to produce and mix Heist, their new full-length album. They had it mastered by Grammy Award winner David Glasser at Airshow Mastering, and early this month, they’ll play the main stage of the famed Telluride Jazz Festival. It may just sound like a long streak of good luck for the band, or it could be viewed as a proper  reward for hard work that they’ve already put in.

Take the famed names away from this release and what is left is a jazz/funk/jam four-piece that is playing at the top of its game. Heist isn’t noodly and exploratory. It’s refined, dialed in, and spot on. The longest song on the nine-track album is just over five minutes long, and like the rest of the album, it doesn’t belabor its point. Tracks like “Charlee Jean” and “Boomer” show a band that collectively cuts the fat without throwing away the seasoning. Guitarist Ben Waligoske plays tremendously throughout the album, and drummer Greg Russell is as reliable as a metronome.