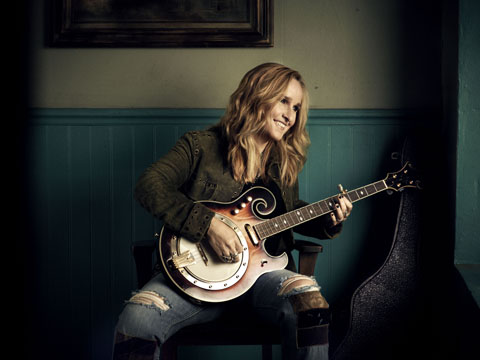 “I think my songwriting’s gotten better over the 30 years. I hope so, anyway,” said singer/songwriter/mother and activist Melissa Etheridge, during a spacious conversation with The Marquee prior to the launch of her summer tour.

It’s been 25 years since Etheridge’s self-titled, Grammy nominated debut album was released in 1988.  She didn’t win for the single “Bring Me Some Water” that year, but her performance stole the award show, and she later won the Best Female Rock Vocal category in 1993 for “Ain’t it Heavy” and in 1995 for “Come to My Window,” as well as for Best Original Song in 2007 for “I Need to Wake Up” from the Al Gore film, An Inconvenient Truth.

In addition to touring behind 2012’s 4th Street Feeling, Etheridge currently has a plethora of projects on her professional plate. Recently, she cut a song that’s under consideration for the next Hunger Games soundtrack. While not her usual audience demographic, Etheridge explained that her daughter opened her eyes to the novels, which have inspired a hit movie and now a sequel. “I read the books because my daughter [eldest, Bailey, now 16] asked me to and I enjoyed them,” she said.

And for the past couple of years, Etheridge has produced the “Melissa Etheridge Radio Show” (a la Alice Cooper), which features the very open segment “ask M.E. anything,” which prompts listeners to continually interview Etheridge on a wide variety of topics. “I love it. It’s on about 20 stations. It’s a syndicated show,” she said. “Listeners send in their stories. I give my stories about all different songs. Talk about the topic of the day. I’ve been doing it for a couple of years. It’s slowly growing.”

In addition, Etheridge and her partner, Linda Wallem (co-creator and executive producer of Showtime’s “Nurse Jackie”), are collaborating on potential projects. “We’re in the process of writing a theatrical musical and something for television, but how concrete they are depends on many other people [coming on board to support it],” she said.

Most exciting for long-time fans, though, Etheridge and her team are finally putting together a box set that will be due sometime this winter. “It’s been this great trip down memory lane. There will be a whole kit and kaboodle thing for the deep, deep fans. We’re looking at probably eight CDs and a DVD and a book,” she said, adding that while digging through the archives she found seven songs that she demoed but never cut. The set will also be available in a less comprehensive edition for less fanatical followers.

It’s a well known story among Etheridge fans that after being signed, personally, by (then) Island Records label chief and founder, Chris Blackwell (who also signed U2 and Bob Marley), Etheridge went into the studio to cut her first album. Upon presenting the tracks to Blackwell, he rejected them as too glossy and polished. Accompanying the tracks, however, was the photo that eventually became the cover shot of her eponymous debut.  Blackwell sent the tapes back with the instructions to create songs that matched the rawness of that photo. Etheridge and her team had four days to make it so.

Not only have these long buried tracks been unearthed for the box set, but Etheridge went back into the studio with original drummer Fritz Lewak and original bassist/producer Kevin McCormick to re-record them. For Etheridge fans, this holds the promise of a long lost treasure.

In addition to being a working musician and rockstar, Etheridge is also a mother of four children and is a well-known, visible player in support of LGBT rights, environmental causes, specific political candidates, and marijuana legalization (including a radio commercial that ran frequently here in Colorado during the last election cycle).

From early on in her career, Etheridge utilized her position to help support and raise awareness on a variety of issues. “When I came out, I was surrounded by some wonderful people,” she said. “Urvashi Vaid, Kate Clinton, Alan Hergott. These were professional people who were making such a difference in the AIDS crisis. That’s probably what made most of us step up — that we were losing our friends and our neighbors, and realizing that our government was ignoring it. I never want to bang anybody over the head with it. I just want to live a good, full, and respectful life. Everyone is here on their own journey. It doesn’t matter where anyone else is on their journey. It’s about taking care of your house, taking care of yourself. The best thing I can be is an example, hold on to my light, hold on to my health, the things that I believe in, create this music that I share, and always create it from that truthful place.”