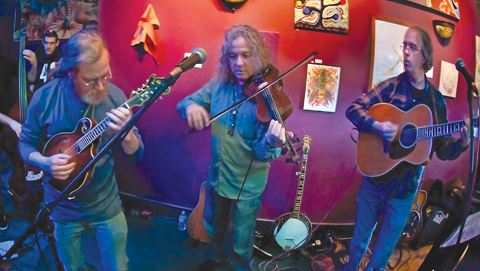 Before you go scouring a map to try and figure out where Shockenaw Mountain is, think back to March of 2003 when United States forces invaded Iraq in search of weapons of mass destruction and on a mission to kill Saddam Hussein. The strategy that was employed at that time by the military was one of “Shock and Awe” and coincidentally, Tim Carbone of Railroad Earth was looking for a name for a new project that he was starting with bandmates John Skehan, Andy Goessling and Johnny Grubb (formerly of RRE, currently Emmitt Nershi Band).

“A friend of mine, Bobby Syvarth, was doing a gig in New Jersey and he wanted to frame his music acoustically, so the four of us got together to back him up,” Carbone explained as he coincidentally prepared to go into the studio as the producer for a new EP Syvarth, the pop/R&B artist, is working on. “Then, to fill out the time, we figured out how many common tunes we knew between us and got on the bill as the opener. The second Gulf War had just started a couple of weeks before so I said ‘why don’t we call ourselves The Shock and Awe Mountain Boys.’” The rest of the band agreed and they changed the spelling a bit, contracting “Shock and Awe” into “Shockenaw,” to give the term a Native American flavor that is strangely convincing for the name of a bluegrass band and The Shockenaw Mountain Boys were born.

Despite their connection to Railroad Earth, Carbone revealed that the group doesn’t play too many Railroad Earth songs during their shows. “We don’t really do any Railroad Earth songs,” said Carbone. “Well, I guess we do one or two that I sing in the band, but for the most part we just want to play some cool bluegrass music and tunes that we like. We don’t get to rehearse a lot so we don’t have a huge repertoire, but we love to get out there and play. Some of the stuff might not be 100 percent bluegrass, but it is all acoustic based. There are no drums and it’s all acoustic instruments.”

In the ten years since that first show, Carbone admits that the band’s performances have been infrequent, at best. “We’ve probably done maybe 20 gigs in that time,” he said. “If you look at the little bio I put up on our Facebook page, I say our ‘performances are legend and by legend I mean mostly myth. So if you have the opportunity to see The Shockenaw Mountain Boys, you should. It would be like seeing a unicorn… sort of.’”

Well, it looks like that elusive unicorn is coming to Colorado this month for two appearances on the Front Range. First, they will be warming up for The Infamous Stringdusters at Cervantes’ on Friday, Sept. 13, then they will be headlining the Sustainable Living Fair in Fort Collins on Saturday, Sept. 14.

The fact that the band is playing the Sustainable Living Fair fits well with the lifestyle that Carbone tries to live day-in and day-out. “I try to ensure that I use as many things as possible in my life that can be sustained. I try not to just use something and throw it away,” he explained. “My wife and I belong to an organic farm where we pay a monthly fee and once a week we go up and pick from a selection they have of what’s in season at that time. Then we augment the rest with our local farmers market. In the winter it’s a little harder, but we go to the health food store and try to keep what we buy organic and as local as possible.”

Carbone did go on to admit that where it really gets hard to live sustainably is living life as a touring musician, criss-crossing the highways of the country on a tour bus. That said, he explained that he and his wife try to minimize their carbon footprint as much as possible when traveling on their own by doing things like buying carbon offsets.

Traveling as a four-piece string band when they come out to Colorado, The Shockenaw Mountain Boys will have much less of a carbon footprint than their big brother Railroad Earth and one can be sure that Carbone and his bandmates will be doing what they can to minimize their impact on the planet.