Trending Stories from The Marquee
You are at:Home»Brad Yeakel»Review: Muse at the Pepsi Center 9/17/13
By Marquee Magazine on September 20, 2013 Brad Yeakel, Live, Live Reviews, Reviews 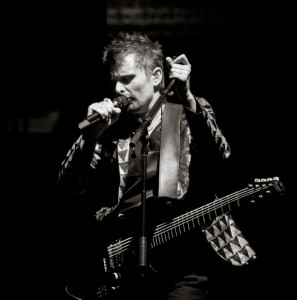 With an overwhelming anticipation, I journeyed to the Pepsi Center to enjoy a band I’ve recently fallen for. The crowd was pretty much what I expected; a far cry from the hippies that will descend on Red Rocks this weekend for Furthur. At the media table, I was told that I wasn’t on the list, and nor was my photographer. We made calls, but alas, it was too late to fix the mistake.

My photographer left, and I found a ticket. The lights dropped, and a pyramid followed, floating down from the ceiling and enveloping the drums.  The pyramid came to life with video as the song “Isolated System” began. At the completion of the intro song, the lighting rig rose and revealed the band.

From that point until the end of the show, Matthew Bellamy, Christopher Wolstenholme and Dominic Howard captivated my attention. Through a two hour show, they showed touches of their influences with moments that reminded me of Floyd, Soundgarden, The Beatles, U2 and more.

Blistering guitar work, creative bass-driven composition, haunting vocals and lyrical prowess have been their hallmarks. It’s a formula that has worked and the fearless way they have incorporated other styles up to and including dub step, proved that they are capable of growing as a band.

With the assistance of touring member Morgan Nicholls (keys and percussion) the band brought to life one epic rocker after another. Most of the setlist was from their most recent album, The 2nd Law, along with some fan favorites from their earlier works. Bellamy’s guitar work was virtually flawless and his vocals were some of the most impressive I’ve ever witnessed. His confidence, tone and range were remarkable. Wolstenholme’s bass was phenomenal throughout, and the way the songs built on his playing really seemed to emphasize his talents as a player and creative force. Both Bellamy and Wolstenholme showed off a guitar and bass with touch pad screens that allowed them to manipulate the duration, tone and timbre of the notes they played. The possibilities were endless.  Dominic Howard worked the kit like a rock and roll legend blasting the skins with power and authority. The way his rhythms worked with the triumphant compositions made for dramatic and thrilling combinations.

The show was a multimedia extravaganza with a less than subtle political undertone. The only band I’ve ever seen use such live production in their show was U2 at Mile High Stadium. The video incorporated live feeds and previously shot footage to blend into something straight off of MTV – at least at one time. At one point, Bellamy held a device in his palm that shot a full spectrum of lasers across the arena. At another, he spun his ultra-illuminated chrome amplifier around like a dizzying spotlight. And then there was the video pyramid which hovered over the stage, changing configurations and shifting with the lights. It was really entertaining to watch.

If you like cerebral rock and roll, I cannot recommend Muse enough. Go see them, you won’t be disappointed.