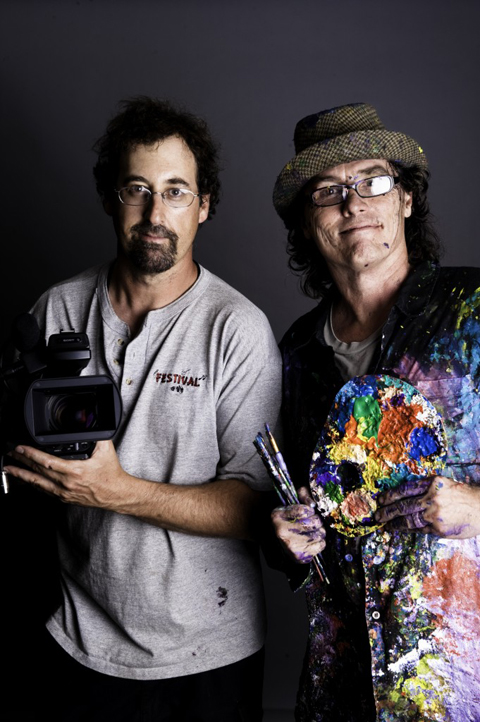 In early September, 1997, on the Planet Bluegrass Ranch in Lyons, Colo., a few then-burgeoning jamgrass bands who would later go on to be the superstars of the genre, hosted the Hoodoo Bash. As Leftover Salmon, who was being joined by Sam Bush, and their opening act The String Cheese Incident, were prepping for the concert, a painter — more specifically a live painter — approached the groups and asked if he could paint a canvas during their set. His goal was to create a painted image that’s akin to a long exposure photograph of the entire show.

“You know Vince [Herman of Salmon] is all about art and crossing genres and he said, ‘Sure,’ and I got to watch the guy more than the band did and I was like, ‘Holy crap,’ said film director and producer Eric Abramson in a recent creek-side interview, mere yards away from the stage where the Hoodoo Bash took place.

That first meeting of artist Keith “Scramble” Campbell and the Colorado jamgrass scene sparked a mutual admiration that continues a decade-and-a-half later and has most recently resulted in an award-winning documentary Scramble Vision, which chronicles Campbell’s career, and the live-painting world that he helped to pioneer.

The film got its start after Abramson, who in 2006 released Years In Your Ears: A Story of Leftover Salmon, returned to the music scene after shooting some heavy activist documentary films for a few years.

Abramson was hired to help film The Cove, a documentary about brutal dolphin hunting in Taijii, Japan, “the little town with the really big secret.” The film, which triumphed on the film festival circuit, went on to win an Oscar for Best Documentary in 2010 and Abramson was consequently hired again by director Louis Psihoyos to cover the BP oil spill in 2010.

“It all culminated with the Gulf spill, where I spent about four weeks over two trips down there. It was so horrifying — that situation of the corporate facists world —that I came home and crawled into a ball. I was so shocked by the fucked-upness that I took a step back,” Abramson said. “I needed to make a positive film, and that’s un-heard-of in American documentaries. I like to say that this film has no environmental chaos, no political cause, no personal tragedy, but it might make you pick up a paint brush.”

The film is being self-released this month, after Abramson and executive-producer Michael Henry spent most of 2012 taking the film on the festival circuit, where it picked up several awards including an Audience Choice Award and Best Short Documentary at SENE Film Music & Arts Festival.

Campbell, in a separate interview with The Marquee, said that for him, watching the process of the filming was puzzling since he’s used to a more immediate medium. “I’m not used to taking so long to do a piece of art,” he laughed. “My art is done at the end of the night and that’s why I get to jump around from tribe to tribe. I got my cue from jam bands. I don’t want to sit there and do the same painting and they don’t want to sit there and do the same set every night. And just like bands like String Cheese and Leftover have never played the same set twice, I certainly have never done the same painting. I’ve done 300 Red Rocks paintings alone. I could do the same painting each night, and it’d be a sharp-ass painting, but it wouldn’t have the feeling.”

:: a screening of Scramble Vision and concert ::