Trending Stories from The Marquee
You are at:Home»Album Reviews»Someone’s In For An Explosion!
By Marquee Magazine on September 1, 2013 Album Reviews, Brian F. Johnson 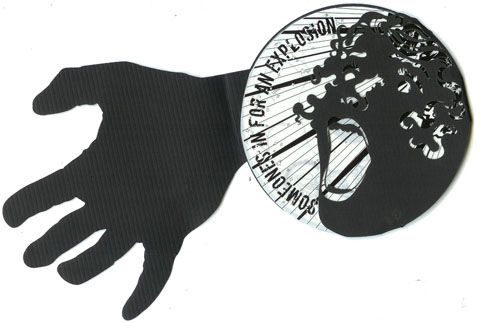 Someone’s In For An Explosion!

Someone’s In For An Explosion!

A passion project that took two years to complete, Someone’s In For An Explosion’s debut, self-titled LP is a dark blend of folk and classical arrangements that comes across as a theatrical score as often as it does an indie folk album.

The brainchild of guitarist/vocalist Garrett Suzelis, the trio tells rather literal-sounding tales with excellent color added by the cello work of Phil Norman. Bass is handled by Bill Carpenter III, and a few other artists added additional instrumentation, including Dylan Fixmer on Dobro, Brian Ellison on upright bass and Tira Neal, who added effects, synthesizer and clarinet, in addition to engineering and mixing the album.

The waltz of “And Still I Wait…” sounds like a number out of a Tim Burton film — presumably a night scene sung by the film’s protagonist. And the album’s closing track “Bury Your Cat” is like a twisted, happy, bizarro world musical version of a Stephen King novel, as performed by half of Tool and half of Radiohead.