Trending Stories from The Marquee
You are at:Home»Cover Story»Stereophonics Paint a New Picture with Graffiti on the Train
By Marquee Magazine on September 22, 2013 Cover Story, Features, Live 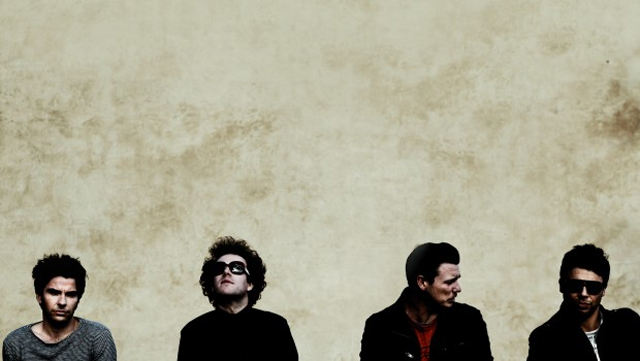 Stereophonics have landed on American soil for the first time in more than five years, launching their most ambitious U.S. tour ever, hot on the success of their latest record, Graffiti On The Train. Fortunately, guitarist and lead singer Kelly Jones is back on his feet following a lager-fueled adventure in Japan during which he broke his ankle. Recent photos show Stereophonics bassist Richard Jones (no relation) peddling the rock star through an airport in Tokyo on a luggage cart.

“The ankle is doing okay,” laughed Jones when he called from Washington, D.C., for a recent interview with The Marquee. “I’m actually going to walk over to the White House in a bit just to give it a stretch. I might post a picture, but I can’t decide if that’s a good idea or a bad one. It looks like the foot of a caveman.”

Caveman foot or not, it’s one that’s made a lot of steps since the band first came together in the early 1990s as a trio between Kelly, Richard and the late Stereophonics drummer Stuart Cable under the name Tragic Love Company. Cable later coined the name that stuck after he found an old gramophone manufactured by “Falcon Stereophonic.”

The night after our conversation, Stereophonics will play The House of Blues in Boston, launching a 16-date tour of America that looks radically different from the past four months of festivals where Kelly and Richard, joined by backing guitarist Adam Zindani, drummer Jamie Morrison and touring keyboardist Tony Kirkham were playing for crowds 100,000 plus strong. Instead, the band will be playing small but famous haunts like D.C.’s 9:30 Club, Terminal 5 in New York City, and Denver’s own Bluebird Theatre.

“Every country is a different experience,” Jones said. “We’re a very different sized band in every different country, which is thrilling and frustrating all at the same time. It’s not something we feel afraid of, because we have a good vibe whether it’s in small clubs in Tokyo or the United States. I think ideally if we could play theaters for two or three thousand people all over the world, the band would be happy, to be honest with you. I think that’s where we do the best shows.”

A fair chunk of the band’s set will be devoted to Graffiti on the Train, the band’s atmospheric and cinematic new album. Largely inspired by a screenplay Jones is writing, the 10 songs include a wide variety of styles, from the romantic tragedy of the title track to rockers “Catacomb,” and “Roll the Dice,” to stylistic experiments like the soaring “Violins and Tambourines,” and “In a Moment.” The album, the band’s eighth studio recording, has already sparked four singles including the U.K. hit “Indian Summer.”

“I think there are a lot of themes about fear and fearlessness and hope,” Jones said. “It’s very much a rite-of-passage story so I think there’s definitely a journey contained within the album. Mainly, it’s about going over some very difficult obstacles and coming out on the other side a better man, you know? There are moments where you feel like it’s just getting darker but I do feel there’s quite a lot of beauty in songs like ‘In a Moment,’ and ‘Violins’ that bring you back out in different ways. It was surprising to me and looking back, I think we’ve done some things together that we’ve never really done before.”

The related screenplay is reportedly about two boys who run away to Europe, and Jones hopes to put it into production next year. The band also has another 30 songs to choose from for a companion record to be released next year. Jones, who studied film in college, very nearly became a BBC filmmaker before the band was signed. More recently, Jones directed three short films to promote the new album.

“I was brought up with two older brothers, so I was exposed to a lot of movies that I shouldn’t have been watching at that age,” he said. “I always loved sequential art and storyboards and scriptwriting. All my lyrics are very descriptive and paint images, which I guess is a natural thing for a storyteller. I tell stories in song one way and writing in another way. I guess I want to move into film to see if I can scratch this itch.”

The album offers a more contemplative sound for a band best known for heart-throttling singles like “Bartender and the Thief,” their Live 8 triumph “Dakota,” and a sly cover of “Mama Told Me Not to Come” with fellow Welshman Tom Jones. Many of the songs harken back to the atmosphere of “Maybe Tomorrow,” one of the band’s biggest hits.

“We’ve never given an album as much room to roam as this one,” Jones said. “Using the example of ‘Violins and Tambourines,’ there’s that whole (lyric-less) section in the middle. I wasn’t capable of a stretch like that in our first few albums because I was afraid of leaving that much space. We always wanted to be on record as the band we were live, which was very much in your face and anthemic. I think as I got older, I learned to have more patience and let those moments build and grow.”

The outlier on the record is the bluesy crooner “Been Caught Cheating,” which sounds almost nothing like Stereophonics, quite possibly because it was written in the spirit of the late Amy Winehouse.

“The song was written with Amy in mind, yeah,” Jones said. “I met Amy a number of times at festivals and I always admired her as a great writer and singer. I had a couple of conversations with her, but I never actually played it for her. It just wasn’t meant to be, really. I played it for the guys after midnight during a studio session, and we recorded it in one take. I think I liked it right there after the intensity of ‘Violins’ and ‘Roll the Dice.’”

The new album also brings changes to the band’s storied history. Stereophonics were the first band to sign to Richard Branson’s V2 Records, which was sold to Universal Music Group in 2007, just before the band enjoyed huge success with the greatest hits album Decade In The Sun. For the new record, Stereophonics have broken free to produce Graffiti On The Train on their own label, Stylus Records.

“Richard Branson was a pretty good boss,” Jones chuckled. “He spent a lot of money on our band and allowed us to do whatever we wanted. We really enjoyed the support on the greatest hits album because we got a lot of push from the machine. We felt very proud of the way people were celebrating the catalogue. Once we realized the first ten years of work were significant, we gave ourselves a break to go off and do something completely different. So we decided to ask some people if they wanted to work on the record and we found a brilliant team of people in London. There’s quite a risk involved in the beginning, you know? But it seems to be coming back in a positive way to a market that has really changed over time.”

Fans that are used to tracking their favorite bands’ playlists from previous shows are in for a surprise on this Stereophonics tour. Jones says that crossing America gives the band more room to roam, mixing their biggest hits with chestnuts from their rich back catalogue.

“I don’t think anyone will walk out disappointed that we didn’t play their favorite songs,” Jones said. “We still do the biggest hits we’ve got but we also get to play album tracks that we get a kick from. It’s the first time on this whole campaign that we get to travel on a bus and work out songs and alter the playlist every night. Festivals are grand but doing half an hour can be quite frustrating when you’ve got a lot of songs. This is an opportunity for us to have a bit of fun playing the songs we love.”