Trending Stories from The Marquee
You are at:Home»Cover Story»ZZ Ward’s Ride to the Top is the Epitome of Her Ethos of Dirty Shine
By Marquee Magazine on September 1, 2013 Cover Story, Features, Interviews 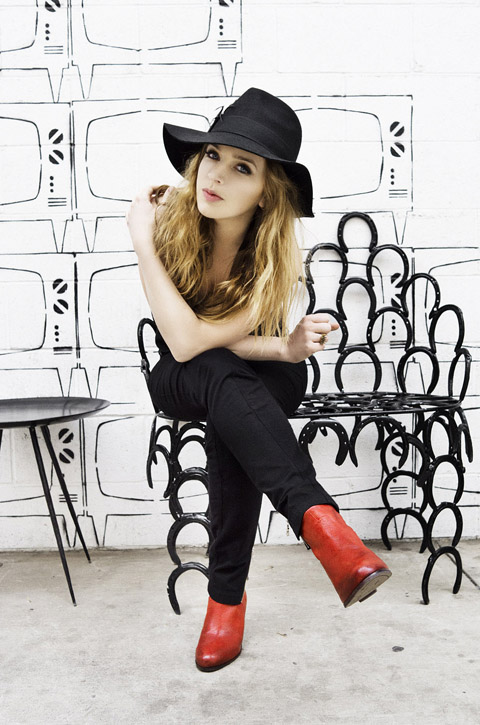 ZZ Ward was raised to sing. Her father had a local blues band in a small town in Oregon, and from the time Zsuzsanna first sang on stage with her father at the age of 12, she knew that was the perspective she wanted to keep in her sights. Now, 15 years later, she is hitting the road hard for her Down and Dirty Shine Tour, on the heels of her breakout first full-length album, Til the Casket Drops. Heavy hitters like Pete Rock, Ali Shaheed Muhammad, and Fitz and the Tantrums may have helped shape the final product, but the root cause of Ward’s successes are her roots. Quickly pulled up to the upper levels of the music industry, she is filling the role with style and grace — with an air of “dirty shine,” if you will.

Like a crazy diamond, Ward is shining on stages across the country, and touring at a fervorous pace, which has already included a sold out stop in Denver at the Ogden Theatre in May. “We’ve been busy. We finished up that tour, then we were home for a little bit. Now, we are finishing a small tour of the Northwest. We will be doing a fall tour going out at the end of this month, for two months. So, yeah, we are pretty much moving all the time. There is not much time staying still these days,” said Ward.

Ward’s dedication to touring is building her fan base rapidly, and is a blessing in her eyes, but it still takes a toll. Especially since she literally went from zero to 60; from no tours under her belt to logging a formidable amount of miles. It’s the equivalent to running a marathon with 0 miles put on your running shoes.

Ward released her mixtape Eleven Roses in February, 2012, her Criminal EP in May, and her full-length album Till The Casket Drops, in October — all in 2012. Then the radio interviews, nationally syndicated late-night television show appearances and touring started. Ward quickly gained wisdom, and a roadside companion. “You just figure out what works for you. I always felt like I needed a buddy out here, so I got a dog. She’s my little road warrior with me. Her name is Muddy Waters. She is a little bit of extra work for me out there, but it is so worth it. When I first started touring it was grind, grind, grind, and then go home. And we were doing it in vans. At some point I realized I live out here. It’s not like I can just get through this and go home. This is where I have to be. And I have to be comfortable out here. Having a tour bus now really helps. I have an amazing band, too, and we all really love touring. We get to see the country, which I never would have seen if I hadn’t done music. You get to meet so many people who have connected to your record, which is pretty powerful. We are still gaining tons of new fans out on the road. I think there is still a lot of touring to come. As a new artist with a first record, I gotta get out there,” she said.

When Ward speaks of the music she loves, and what has influenced her most, the conversation usually revolves around the blues or hip-hop. There is a common thread that pulled Ward to both these genres. “The similarities, to me, are the authenticity of the music. For me, watching someone sing the blues, like Muddy Waters or Big Momma Thorton, I could tell they were completely connected to what they were singing about. It’s the same reason I love hip-hop. It’s that drive. That passion. That’s what’s always attracted me to both types of music. I want music to make me feel sadness, or empowered, or angry, or sexy. I have to feel something from music. For me, hearing themes like ‘I gotta get outta here’ or ‘There’s more for me around the corner’ in hip-hop, was something I related to, even though I was in a totally different environment than the settings of those songs. I was out in the country, but I still felt like there was more for me out there,” said Ward

More indeed. Ward is from a town of around 6,000, and now she performs for twice as many people in a night at some shows. Her album is number 10 on the Triple A radio charts, and her songs have been heard by millions.

Ward’s career is an explosion based in authenticity, and her childhood musical tastes might have foreshadowed her high-mileage future. “I remember when I was a little kid one of my favorite songs was ‘Hit the Road Jack,’ by Ray Charles,” said Ward. “When I was like six, anytime I heard that song on the radio I would be like, ‘Turn that up. Thats my song!’ I always have connected to bluesy and soulful music. It just resonates. I got into stuff like the Alan Lomax field recordings later. For me, it’s the footprints to the blues in a lot of ways. Those field recordings and prison recordings are simplistic, but they are filled with raw emotion. There is no separation between the emotion and the words.”

• Grace Potter and the Nocturnals