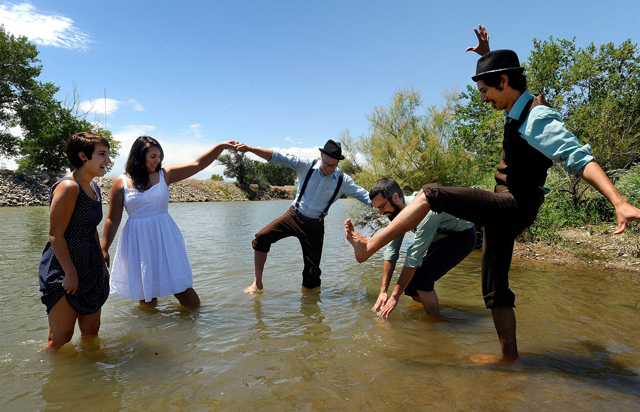 Her band may be approaching their upcoming set at Swallow Hill’s 6th annual Denver Ukefest as a normal ‘power set,’ but for The Haunted Windchimes’ ukulele player Desirae Garcia, the pressure is on, as her group’s ambassador of the ukulele.

“Yeah, I definitely feel a little bit of pressure. I’m not exactly a traditional ukulele player. I don’t really know anything about the ukulele. Like, I call it a ukulele [yoo-ka-lay-lee], which is a perfect example. They all call it a ukulele [ook-koo-le-le],” Garcia laughed, during a recent phone interview with The Marquee.

Garcia explained that she picked up the instrument many years ago after playing guitar for some time. And she did, in fact, get her uke in Hawaii, when her parents lived out there. “My sister still lives in Maui, and I have this kind of weird insecurity when I go back, because everyone plays traditional style. They’re taught by their families, young, and everybody does it. And when I go back I feel nervous because I run in there with my cowboy boots, playing cowboy chords and strutting it like I’m playing a guitar, basically, which I feel pretty comfortable doing. I feel like I play it pretty well. But it’s definitely not traditional style,” she said.

While her particular style is much more contemporary, Garcia and The Haunted Windchimes are far from modern. The Pueblo-based quintet plays chamber pop and old-time music with an authenticity that makes it feel as if the group stepped out of an Alan Lomax tape deck. The band, which was originally started as a three-piece, has put out two home-recorded “studio” albums as well as a live offering and the group’s latest Out With The Crow garnered some incredible.

The band touches on multiple genres, but never really settles for any of them. Elements of bluegrass, country and blues, not to mention some indie sensibilities continually ebb and flow through the Windchimes’ catalog.  The flexibility of sound led the group to an intense summer schedule playing festivals as well as headlining gigs from Kansas to California.  Garcia said that while many bands lament shorter festival sets, The Haunted Windchimes embrace the opportunity to give audience members a “Cliff Notes” perspective of their group. “We prefer the power set. That’s what we call it. We try to sum up our band’s life story in 30 to 45 minutes, and that’s kind of a lot of fun. You know, we have to put in one song that highlights the mysterious aspects of our songwriting and then one of our traveling songs and then some things they don’t expect. We don’t want to give anyone the wrong idea, so we just try to summarize it the best we can.”

The Haunted WIndchimes are currently playing in support of their latest release 2012’s Out With the Crow, but Garcia said that since the group is taking it easy on touring from November through January, they are just starting to discuss recording again. “We’ve been talking about doing a new record for a long time now. We definitely have enough material for a couple of new albums, and that’s fun. It’s kind of like coming up with that 30-minute set again because we have more than enough material and we have to pick out the year-and-a-half life story for an album instead of a power set,” Garcia said, adding that due to still being in the embryonic stages of planning for the new record she’s not sure still where the group will record or when the album will be out, but said that she hoped by next summer.

Ukefest, presented by Denver’s Swallow Hill, is a celebration of all things ukulele. Now in it’s sixth year, the festival has hosted the superstars of ukulele in concert, while also providing workshops, master classes and jams.

The full rundown of artists can be found here

A full day of festivities! There will be workshops for all ages and skill levels presented by the artists, custom ukulele builders, jams, an open stage, master classes, ukuleles for sale, sing and strum-alongs, lunch/dinner, Colorado microbrews, and the big concert featuring Aldrine Guerrero, The Haunted Windchimes, Ooks of Hazzard, the Denver Uke Community and more.

With the release of Man With a Love Song, James Hill, best-known for his genre-busting ukulele playing, takes his place in the ranks of today’s best young songwriters. Resonating with jazz, bluegrass, old-time and folk influences, Man With a Love Song is an album that fills you up and keeps you coming back for more.

Cellist/singer Anne Janelle (formerly Anne Davison) moves so gracefully between classical and contemporary styles, you’d think it was easy. Throughout her years of training as a classical cellist Anne maintained a love of popular, jazz and folk styles. Anne’s concert history – which includes performances with various Canadian orchestras, as well as pop artists such as Kanye West, Bruce Cockburn, Holly Cole – is testament to that. Anne has also flourished in contemporary music, experimenting deeply with free improvisation in both music and dance.

Jherek Bischoff is equal parts songwriter, producer, performer and composer. He has also been called a “pop polymath” (The New York Times), a “Seattle phenom” (The New Yorker), and “the missing link between the sombre undertones of Ennio Morricone and the unpredictability of John Cale” (NME), but this music speaks for itself. His recent album Composed is a meticulously arranged, multi-tracked album of nine orchestral pieces created in DIY fashion yet featuring guest vocalists like David Byrne and Caetano Veloso and instrumental soloists like Deerhoof’s Greg Saunier and Wilco’s Nels Cline. The composer & his album’s amazing creation story have been featured on NPR’s Fresh Air with Terry Gross and are quickly becoming the stuff of underground legend.

Three friends, three voices, three ukuleles make us the Star Belle Ukulele Trio out of Utica, Nebraska. In the midst of raising kids in small town Nebraska, these women love singing and laughing and sharing their story with anyone listening. After three years together, they’ve just finished up recording their debut album due to be released this fall. This is their first appearance at the Denver Ukefest.

Let’s Get It On Video
Bandito Tyler

The Haunted Windchimes’ sound draws from traditional folk and American roots music. The songs have a vintage quality, as if they might have been written yesterday or 75 years ago. Grounded in honeyed harmonies and spirited pickin’, it lies in a nowhere land between distinct styles: It’s not quite bluegrass or blues or country. Still, there are elements of all those in songs that paint pictures of empty train stations and nights of passing a jug of moonshine around. It’s the vocal harmonies that really set them apart, a three-headed juggernaut of Desirae Garcia (ukulele), Chela Lujan (banjo) and Inaiah Lujan (guitar). “When their voices blend, it is nothing short of beautiful,” writes Bill Reed of The Colorado Springs Gazette. The sound is often moody and melancholy, but it is always deeply affecting. That sound is embroidered by the instrumental mastery of Mike Clark (harmonica, guitar and mandolin) and the standup bass foundation of Sean Fanning.

“What The Ooks Of Hazzard lack in marketable style, exorbitant youthfulness, and unrelenting buzz, they make up for in ukuleles.”

The Ooks of Hazzard were formed in March of 2010 at a local open mic jam session in Venice Beach CA by Charlie Diaz and Patrick Hildebrand. Gathering other local musicians, they recorded a live video cover of MGMT’s “Kids” in April 2010. The video went viral almost immediately and continues to get 1000+ views a day on You Tube. The Ooks can be seen performing at various local venues, festivals and charity fundraiser events nationwide. Singles can be purchased on iTunes.

Not too far back in ancient ukulele history, the Rocky Mountain Ukulele Orchestra had a nutty idea: If you own a ukulele, and you’re willing to practice at home a little bit, it might be possible to assemble an orchestra of diverse players and rawk out some pretty legit tunes. Since then, we’ve learned to play rehearsed music from every era, we have a delightful audience participation portion of our concerts to make every ukulele-meister thrill with chordal passion, and occasionally we do something painfully funny. We meet every Sunday just west of Denver and we hope you’ll join our slightly demented band of people who oddly take the ukulele seriously.

FaceMan is a Denver rock band comprised of Dean Hirschfield, drums, David Thomas Bailey, 7 String Guitar, and Faceman, guitar and vocals. Generally, FaceMan is fascinated by miniature string instruments and is honored to once again be apart of a magnificent gathering of fellow enthusiasts. Uke can’t believe how excited they are to bring their 50 piece ukulele army to the festival.

Stuart Yoshida is a long-time resident of Colorado. He started the OokTown Podcasts (www.ooktown.com) in 2011 to “talk about all things Ukulele.” He has been teaching guitar and ukulele for over a decade. Since 2001 he has focused on playing the ukulele as a member of Book ‘em Danno, a four-piece band specializing in Hawaiian music.

Growing up in Hawaii, he started playing guitar in 1975. In college he studied Mechanical Engineering and also took time to learn music theory. After moving to Colorado, Stuart began performing as a professional musician starting in 1990.

While visiting the Big Island in 1999, he commissioned a custom made ukulele from David Gomes. Ever since then, he has been polishing his skills and teaching about the famous “dancing flea.”

Stuart uses his background as a Six Sigma Process Black Belt to give his students the best possible musical experience. He is one of the finest ukulele players in the state.

Born on the Mississippi River and raised on Methodist hymns, folk ballads and vintage country, learning to play was a necessity for Chris McGarry. After simultaneously picking up a guitar and an obsession with Walt Whitman, creating his own songs became only inevitable. Residing in Denver’s Capitol Hill, McGarry is part of the new breed of old-time musicians who live in trendy neighborhoods while mining the internet for inspiration found in the form of depression-era 78’s transferred to mp3 format. Yet, despite his relocation to an urban environment, his immersion into modern amenities and a post-beatnik lyrical style, McGarry’s musical roots remain sedentary; melodies as haunted as the river bluffs and a voice as gravelly as the silt laden shores he wandered as a child.

Casey earned his Bachelor of Arts in Music from the Hartt School at the University of Hartford, Connecticut. Relocating to Colorado in the summer of 2012, Casey took up teaching residency at The Lesson Studio in Boulder. Casey’s ukulele studies have led him into playing for weddings and private parties as a solo instrumentalist. Heavily influenced by Jake Shimabukuro’s ukulele approach, he believes in blending melodies and chords together to create a unique sound from an instrument once solely relegated to vocal accompaniment. As a teacher of all ages and levels, Casey makes it his mission to bring the love of the ukulele to anyone and everyone with the will to play.

Doug Brown has been playing ukulele over 10 years, and has been the president of the Denver Uke Community for five years. He loves playing and sharing his love for this great in-strum-ment, and hopes to infect everyone with his own brand of Uke-a-mainia! Keep strumming!!!

The Denver Uke Community has been bringing “ukemaniacs” together since 2005, meeting on the third Saturday of each month at Swallow Hill Music at 10:30 a.m. It includes members of a variety of skill levels from beginner to “wow that person ROCKS the Ukulele!” The group plays a wide range of music including country, Tin Pan Alley and Hawaiian, and will be hosting a sing-along jam as well as performing main stage at this year’s festival.
Video