Trending Stories from The Marquee
You are at:Home»Brian F. Johnson»decker Plans for a ‘Less is More’ Year in 2014, After Four Albums in Four Years
By Marquee Magazine on November 1, 2013 Brian F. Johnson, Features, Interviews 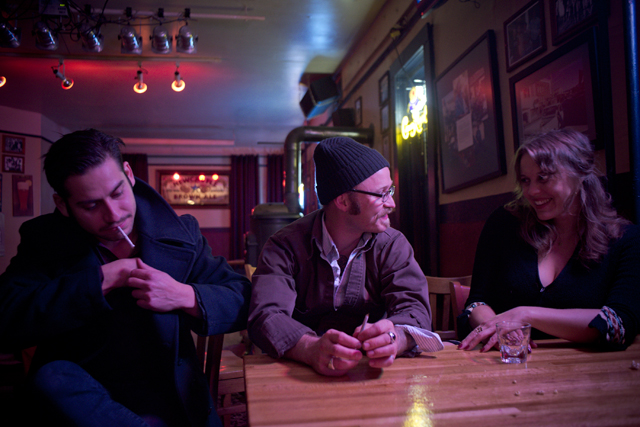 When Brandon Decker sings the line “Love is so much, it’s all things at once, but you’re killing me,” it’d be too easy to dismiss the song as a message to a lover.

It’s just as plausible that the Sedona, Ariz.-based indie folk songwriter, who plays with his band  simply as decker., may very well be talking about music itself — which seems to have tried in more ways than one over the years to off the songwriter.

Since 2009’s debut Long Days decker. has released four albums and regularly played more than 120 shows a year — a resounding success in many regards. But the band, who is in the same struggle as every other band on the road trying to eek out a living, has also gone through nearly 20 members, and last year the group barely survived a horrific rollover crash while on tour in California.

“Everybody thinks that the themes on the newest record deal directly with the accident, but we were almost finished with Slider when the accident happened,” Decker said in a recent interview with The Marquee. “We wrote one song after the accident that had nothing to do with it, and we did name one song on the album ‘Cotton Jane Doe’ as an homage to how Kelly was admitted to the hospital that night, but that’s it.”

Decker was referring to his long-time musical partner in decker., vocalist and percussionist Kelly Cole, who broke a bone in her neck during the crash. “We were headed from a show in Oakland to a show in Los Angeles and we were pushing it a bit, when the van blew a tire, and when that happens with a trailer, you’re toast. We just started flipping. Kelly was unconscious and the helicopter came in and air lifted her to the hospital that deals with trauma and the rest of us got taken to another hospital. We had quite the job that night tracking her down. We didn’t even have shoes or wallets,” Decker said.

But only a few months later, after some lineup changes and finishing touches, decker. released Slider, a splendid indie-folk album that couples superb songwriting with Ennio Morricone-like Western psychedelia. From trippy desert-scape haunts like “Shadow Days” to the aforementioned “Cotton Jane Doe” — which gives a nod to the great Leonard Cohen song “Famous Blue Raincoat,” with the line “did you ever go clear” — Decker and Cole share both soaring and subtle vocals in a mix of tenderness and strength.

“All of the albums have driven me to the brink of insanity,” Decker said. “But this one was different. We had the same structure of people around for a while, and while I wrote the material, the rest of the group helped to hash out the songs. There was this real synergistic quality that I had never had before and it opened it up musically in a way that never happened in the past. It was always just a guy with an acoustic on the first three, but this one with the whole band working on these songs, it went to some mysterious places,” Decker said. “And obviously, finishing it and getting it out after the accident — there was something monumental about that.”

Decker said that the lineup changes after the accident weren’t too surprising, especially after so many other changes in the group over the years. He even admitted that some of the changes were his own doing. “I can be a challenge, and that’s something that I have to reckon with. The biggest thing for me is the tunel vision. I’m so buried in it, inside the band, outside the band, it can be tough because I have these blinders on. But right now, I’m honored to have anyone playing music with me and right now I have five people on board who are talented and good spirited, and I’m blessed to have them sharing the vision,” he said.

Joined now by Amber Johnson on keyboards, bassist Brett Graham and percussionist Henry Benard, Decker and Cole are soldiering on and back on the road, although they’ve sworn off trailers forever. And as 2013 starts to wind down Decker is excited about a more relaxed schedule for 2014. “I’ve made four records in four years. And the name of the game for me is sustainability. Spending $14,000 on a record isn’t sustainable. So next year is going to be a ‘less is more’ kind of year. Bigger shows, but less frequently and more frequent releases, but not with so much magnitude.”