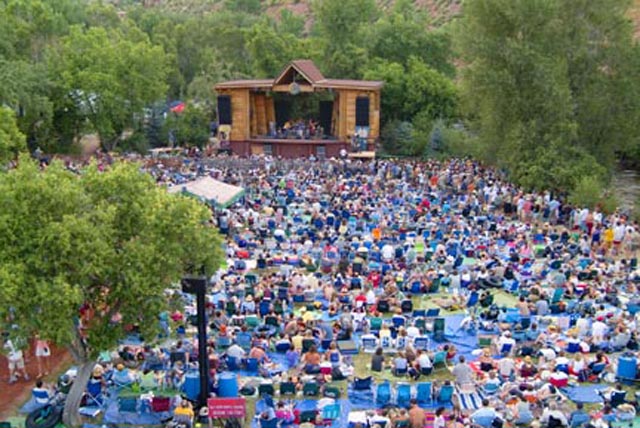 Reflecting their confidence in Lyons’ and Planet Bluegrass’s post-flood rebirth, the 42nd Annual lineup is arguably the festival’s strongest ever, boasting more Grammy and IBMA award winners than in recent years. Many of these internationally-known artists approached Planet Bluegrass within days of the flood, looking for ways to help Planet Bluegrass and share in the upcoming 2014 RockyGrass.

During the flood’s peak on September 12, the entire 20-acre Planet Bluegrass Ranch was under several feet of rushing water. Though one of Planet Bluegrass’s primary offices collapsed and floated down the North St. Vrain River, the staff reopened an office on November 4 in the first building to be repaired after the flood (without heat, running water, sewer, or permanent electricity).

Before the flood waters had begun to recede, president Craig Ferguson vowed to rebuild Planet Bluegrass better than ever. Improvements to Planet Bluegrass 2.0 will include a newly graded “bowl” seating area with better sight-lines, a new beach and family area, a remodeled and acoustically-tuned Wildflower Pavilion, and native revegetation throughout the property.

Amidst national stories about the historic Lyons floods, the numbers of entries in the 2014 ticket lotteries have set new records. The online lottery for onsite camping at RockyGrass is open now thru December 1. The 200+ spaces in the RockyGrass Academy (July 20-24, 2014) sold-out via an online lottery on November 13.

Planet Bluegrass encourages Festivarians to support the town of Lyons’ flood recovery and the many families and businesses who are still in immediate need via the resources at: www.LyonsFightsBack.org.