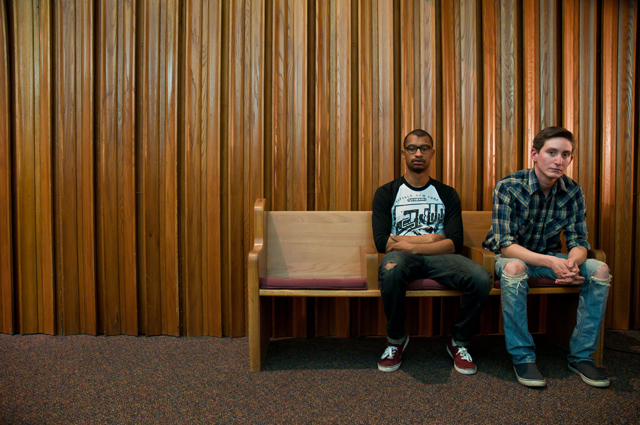 By and large, most rock and roll these days has been sanitized. There used to be a dangerous edge to all rock, but so much of that edge has been dulled by safe-bets and radio formulas. Denver’s In The Whale, though, strips rock back to where it used to be — no helmets, no knee pads or mouth guards — just straight-up bombastic rock that is fresh, fun and sexy.

“All of those guys-chasing-girls songs — when you write rock and roll like this you have three topics to choose from — girls, booze and motorcycles. You’re kind of whittled into a category, or else you go political, and that’s not what we’re about. We’re about fun times and reminding people why they go to shows,” said guitarist Nate Valdez during a recent interview with The Marquee. “Otherwise, you’re just standing there, golf-clapping.”

In The Whale ain’t got no time for golf-claps. Instead, the group pounds out heavy, driving tracks like “On A Roll.” With lines like “Forty-five hours to the Mexican border/I got the sherriff’s daughter and he’s breathing down my shoulder/Ain’t turning back/Ain’t gonna take me alive,” In The Whale is sort of Denver’s answer to The Eagles of Death Metal, and their songs drip with rock swagger not seen since EODM released their breakout album Death By Sexy.

Oh, and they do all of that roof raising as a duo.

“We are pretty loud for it. It’s the two of us on this [release]. It’s just Eric and I, and Pat Meese played  some piano, but that’s it,” Valdez said, referring to drummer Eric Riley and producer/musician/ Denverite Patrick Meese.

Valdez explained that a big part of that huge sound can be attributed to his rig, which takes two independent signals and sends one clean from the guitar to a bass amp and another one to a series of pedals. “If you watch us play live, I do lots of dosey-doeing, hitting pedals and playing both parts. It’s difficult, but a necessity to fill in that bass sound. But I put a clean signal into an octave pedal and that’s how I get that low, gritty third octave,” he said, explaining further that he modified the idea from what Scott Lucas, the guitarist from Local H, does. “He uses a bass pickup in his guitar. I saw that and thought it was so cool, but I realized there’s a lot you can do with pedals, and I didn’t want to cut into my guitar.”

Learn how to get your music heard at ReverbNation.com

In The Whale recorded their upcoming release, a 7” titled, simply, Eric last summer at their home, with Meese at the recording helm. “We got some good gear and set up home studio style. We were going to do an EP, but then decided it might be cool to do a 7” — something small, maybe four songs, on vinyl. So we recorded it all, and got all the songs and Pat then sent it off to a gentleman in Portland, and they put it on vinyl. I’m really excited about it,” said Valdez.

Eric will feature three songs on the vinyl and CD versions, the aforementioned “On A Roll,” “Girlfriend,” and “Sunbeam,” and a fourth track, a cover of the Violent Femmes’ “Add It Up,” that will be given away for free, digitally.

The band, which just last year released the four-song EP Cake, has a ton of other material, more than three hours worth, according to Valdez, but enjoys the flexibility that shorter releases provides them. “Cake was so successful and it got us to a really, really good point. Why burn through all the time and money now, just to make everything as unique as possible in the short run? This keeps people interested,” said Valdez. “You know, when you do a full album you can live off that for years, and maybe you shouldn’t. I understand when people do that because it takes a long time to get all that gear and that sound and those songs and money. But now, with people being so fast it seems more appropriate to do little bursts instead of one big one.”

With this release being named Eric it doesn’t take a rocket surgeon to figure out that the next burst, another 7” aptly titled Nate, may soon be forthcoming. Plans are to release that in early 2014.

• Queens of the Stone Age