Trending Stories from The Marquee
You are at:Home»Features»Monocle Gets Back to it After Floods Destroyed Their Town and the Studio Where They Recorded Their New Album
By Marquee Magazine on November 1, 2013 Features, Interviews, Kirsten Cohen, Miranda Brooks 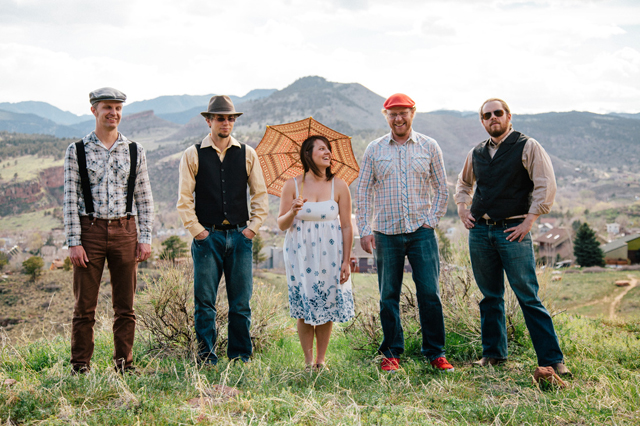 As the rain started to fall in Colorado in mid-September, Monica Whittington was putting the finishing touches on plans for her band Monocle’s self-titled debut CD release schedule. The band had the album complete, and were in the midst of scheduling shows and the other happenings around a record rollout when Whittington, a Colorado Springs native living in Lyons, had to evacuate due to what would become the flood event of the last century in Colorado.

Whittington was one of the lucky ones, her home safely perched on a hill over town, but the impact of the flood knocked out utilities and access to her house and more than a month and a half later, she was still displaced — living in a friend’s basement in north Boulder.

But this month, as Whittington gets set to move back into Lyons, all of her focus is again on getting this album out — and now, more than ever, the dedication to that project has a resounding, poignant sign of victory attached to it.

Monocle embarked on this labor of love for their self-titled debut some time ago, approaching it as a long-term project, not just a record-it-and-get-it-out-there kind of release.

The album is an organic result of the band’s collaborative and creative nature that emerged naturally from friendships between band members and contributing artists such as Grammy winner Sally Van Meter, Eric Moon, and owners of The Distillery Recording Studio in Lyons, David and Enion Tiller.

It was over lunch one day that Whittington and Monocle’s second primary songwriter Bill Huston decided to make an album together. With craft and deliberate intention, Huston and Whittington spent hours re-working songs from their back pockets, ones they had sat on for years. Adding a full band to include Eric Wiggs on standup bass, Ben Blechman on fiddle and Josh Moore on drums, provided Monocle a fresh sound with a new take on their old tunes.

Once the material was set Huston and Whittington began searching for the right producer. “We had been researching studios for quite a while — really doing our research on them. We had looked to some of the musicians that we look up to as well to see where they recorded. Bill and I knew of the Tillers, but we didn’t really know them. One day over coffee at the Laughing Goat we were talking about where to go [to record]and when we walked outside — in what I call a divine moment — there was Enion Tiller. I didn’t know her well enough to go up and say anything, but we knew then we had to work with them,” Whittington said in a recent interview with The Marquee.

When it came time to record, Monocle went to the Tiller’s studio and over the course of a year the band and the Tiller’s became family. They slept on the floors of the studio and spent days that turned to nights recording music.

Sadly, the Tillers lost their home and The Distillery Recording Studio in the flood, as both were located in the heart of Lyons, in one of the hardest hit sections of town.

“It adds a deeper connection with heightened emotion. Any record captures a moment in time, and we feel lucky to have been there at that time to be one of the only bands to record there,” Whittington said. Huston added ” We put our heart and soul into the songs which now, even more so, contain irreplaceable and poignant memories.”

In fact, Huston pointed out, that the last track on the CD, “Home,” includes the refrain “Home, I can’t wait to see you again,” a line that has now taken on a new meaning for so many who have been displaced by the floods.

As Lyons rebuilds, the Colorado community (musical and otherwise) continues to come together in all kinds of ways with a supportive environment, as residents helped the Tillers clean out the studio. But David Tiller said in late October that it could be a year before they can return to their property, and that there’s still great uncertainty about if and how they will be able to rebuild there.

While Monocle was slated to celebrate its official CD release at the Oskar Blues Longmont location following the flood, it was announced just before deadline that the show was being moved back to Lyons, and the Tillers, who have their own band Taarka, will join Monocle, with opening support from The Railsplitters. “The community here is largely unpretentious and warm and welcoming,” said Whittington. “I was trained classically in voice performance, but taught guitar by my mother, and to be accepted in a community of really badass musicians is just too cool.”

• The Head and The Heart