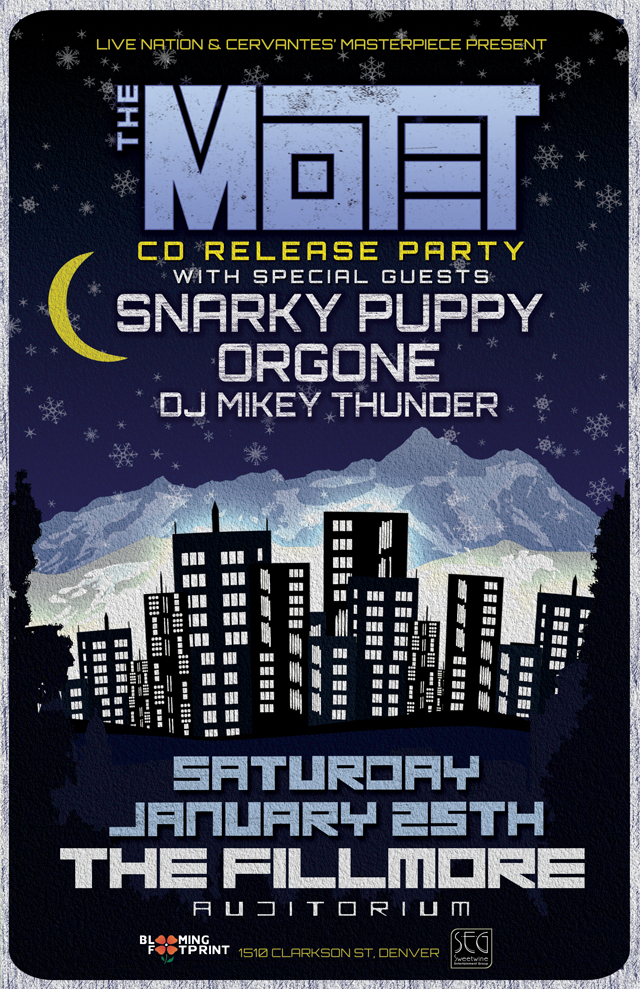 Celebrating their first album in four years The Motet will be hosting their official CD Release Party at The Fillmore Auditorium on January 25, 2014.

In honor of the announcement, The Motet is re-releasing the official video for the song ‘123’, filmed to a capacity crowd at the Fillmore Denver last April.

As part of their forthcoming album, ‘123’ is an ode to Colorado. This will be the first album by The Motet to be completely composed by the entire band. Each member has contributed equally to the writing process making this the band’s most focused and inclusive CD yet.

To embellish their line-up and their blend of funk and psychedelic improvisation, The Motet will bring in some long-time friends and collaborators to perform with them at the Fillmore, including Jason Hann (SCI & EOTO) on percussion.  They will also be featuring two of their favorite national acts: Snarky Puppy and Orgone, as well as elctro-funk genius DJ Mikey Thunder.

Collaborations between all of these musicians can be expected throughout the night.

In addition to all this, The Motet plans to add to the Fillmore’s already expansive lighting setup to create an unforgettable evening of music and visuals.  This is going to be a historic night in the history of The Motet.

Tickets go on sale THIS Friday, November 15 at noon here