Trending Stories from The Marquee
You are at:Home»Features»Ark Life Nears Release of Debut After Heaps of Early Success
By Marquee Magazine on December 1, 2013 Features, Interviews, Timothy Dwenger 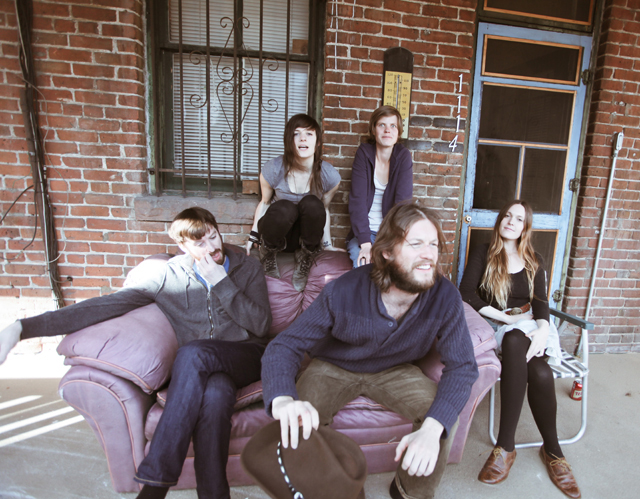 So far, the story of Ark Life is that of a happy accident befalling a band of friends who laugh and beam at each other as they play.  It’s the kind of thing that only really happens when you’ve paid your dues, slept on beer stained floors, and humped your own gear for years. With time spent in hard touring projects like These United States, The Czars, Nathaniel Rateliff’s band, and Kaki King’s band under their belts, the palpable excitement that surrounds this quintet is a touch surprising and may well be a harbinger of big things to come.

Jesse Elliott, who fronted the indie rock band These United States for more than five years, was passing through Denver before making a big move to New York City a year ago and sorta got stuck on the Front Range. “I was gonna move to New York because I hadn’t really lived anywhere in about five years, as I’d been on the road so much. New York was my favorite place to hang out in between tours; I have a lot of good friends there and there are creative folks of all walks of life,” Elliott said during a recent conversation with The Marquee as he strolled the streets of Denver postering for an upcoming Ark Life gig. “I had planned to be here for about a month or so and it was super fun so that month became two, and then three, and at that point I had started jamming with Anna, Natalie, Lindsay and Ben and said, ‘I’m not really moving to New York, am I?’”

After only a few weeks of playing together, the group decided to make a go of it and played their first gig at Cherryvale House in Boulder in March of 2013. A few weeks later, due to Elliott’s previous commitment to play at the Brooklyn Museum, the band raced off on a tour that took them through the Midwest and included a stop at the Daytrotter Studio in Rock Island, Illinois — a relative rarity for such a young band. “I know Sean and the Daytrotter folks from having done a few T.U.S. sessions and I just called them up, told them I had a new band, and probably sent them some shitty video and Sean was like, ‘YES, please come here for a session!’” Elliott revealed.

To listen back to the Daytrotter session today, only eight months after it was recorded, reveals a deceptively mature and confident sounding band that could have passed for one much more established. Amidst dense layers of rich swirling harmonies and ringing guitars, Elliott’s brilliantly penned lyrics paint rustic pictures with verses like, “I knew I was back in Georgia, that I could not be anywhere else. There was a cigarette lounging around in a golden ashtray, just smokin’ itself,” or, “It wasn’t I who laid down this golden road ahead of me, I’ve got some very fine friends, and all the right enemies.” As his slightly brittle voice spins the tales, the band effortlessly blends elements of Detroit’s Motown and Nashville’s country into driving rock and roll that conjures up the feeling of tearing through the dustbowls of the Midwest with the top down and the sun disappearing into a golden haze.

To date, the only way to be fully immersed in the Ark Life sound is to attend one of their electrically charged performances, log on to Daytrotter, or dig up some of the live video that is floating around the internet, but Elliott promised that would soon change.  “We are working on our first release right now. We did half of it with Marc Benning at The Hideaway, which is this really cool little studio that’s been around for 30 or 40 years up in Pike National Forest. Then the second half we did up in Portland with our buddy Eric D. Johnson of Fruit Bats, who is really the producer of this project,” Elliott said. “It’s all tracked and I’m going to head out to Portland to finish mixing it in the next couple of weeks here. Hopefully, we’ll be done with it by the end of the year.”

While the album doesn’t yet have a label or a release date, Elliott was very confident that it will make its way into the world early next year as easily as the band has so far. “Our whole take on this project has been to let things be as casual and organic as possible and it’s worked really well because there is such great support of live music around here,” he said. “It feels pretty good right now, I don’t think we are terribly concerned about sending it off to Columbia or anything like that.”

:: supporting The Head and The Heart ::