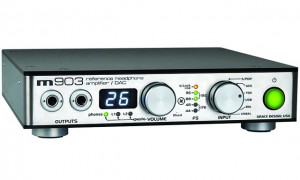 The phrase “digital audiophile” was for many years an oxymoron, but these days, with hard drive space becoming nearly limitless, big, fat lossless files have made digital audio a solid choice for the audiophile. For anyone concerned with sound quality coming out of their computer, few products are as valuable as Grace Design’s m903 reference headphone amplifier/DAC (digital to analog converter). The market is awash with cheap DAC’s and some of them can still significantly improve sound quality, but the m903, made by the Lyons, Colo.-based company is the Ferrari of such devices.

The m903 was designed as pro gear, and it’s used in a number of studios, but home audiophiles have also taken note and incorporated it into their must-have lists of equipment. The m903 is a step forward from the previous model, the m902, in that it has a USB input, so instead of coming out of a computer’s headphone jack (most of which have very cheap, very small DACs built in) the audio comes from the USB source, which allows the 903 to have something to work with from the get-go. It also has a slew of other inputs and could be a replacement/upgrade for lots of other gear. Of course, to really hear the effort put forth by the Grace team, reference headphone or monitors are required, but even entry level equipment will see massive boosts when they’re attached to a 903.