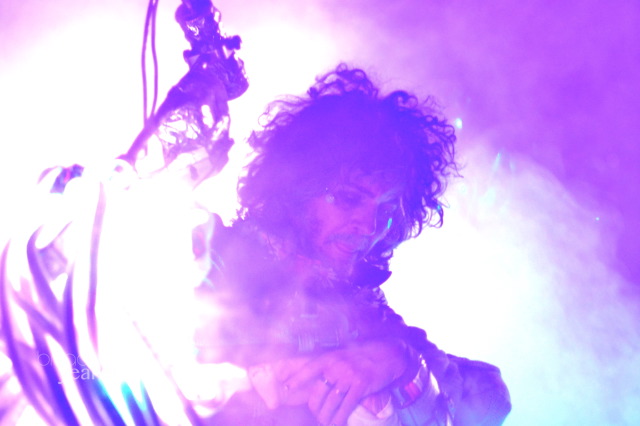 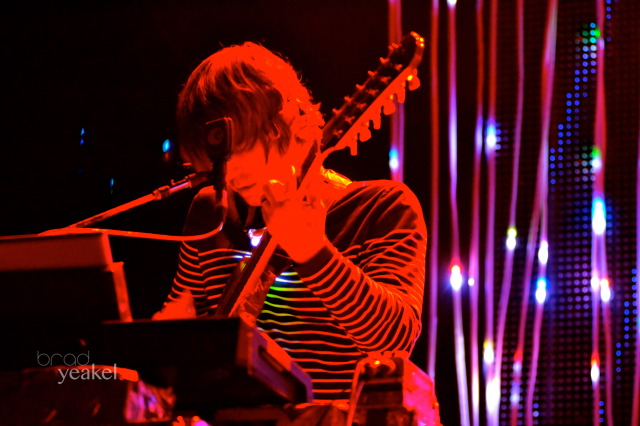 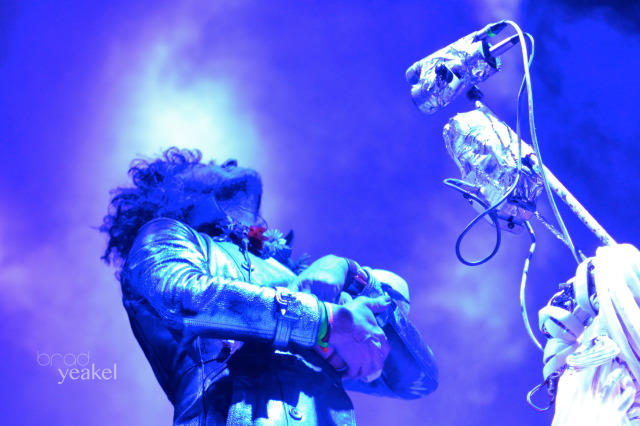 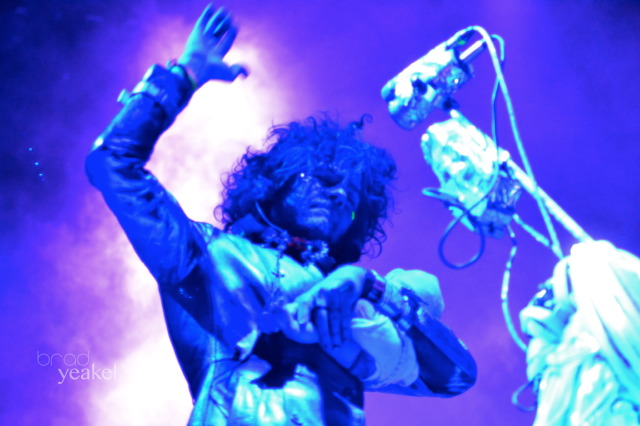 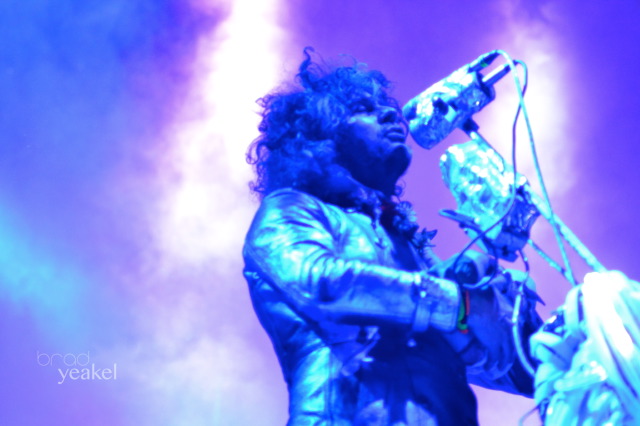 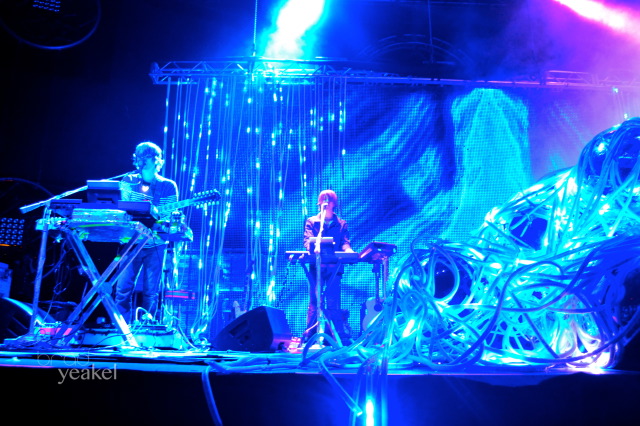 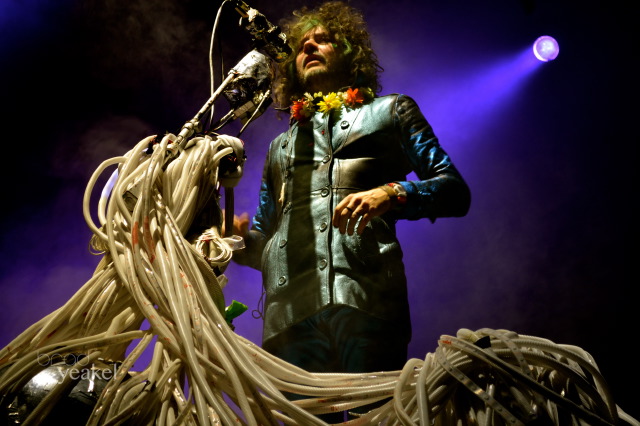 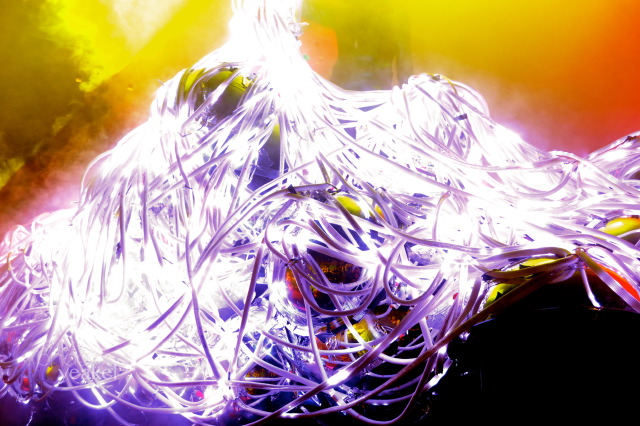 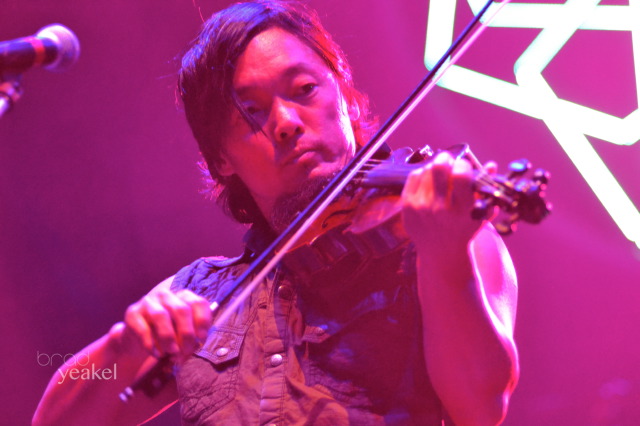 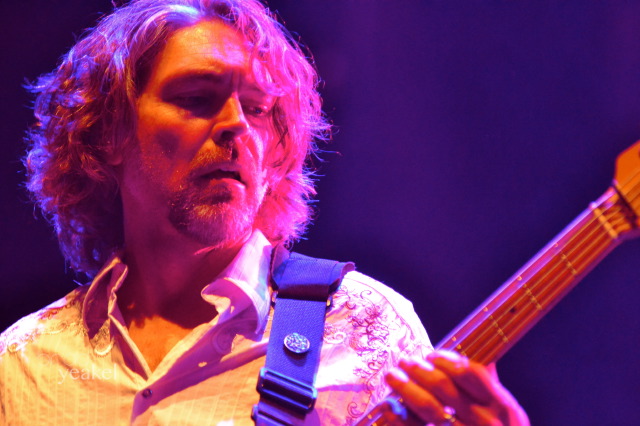 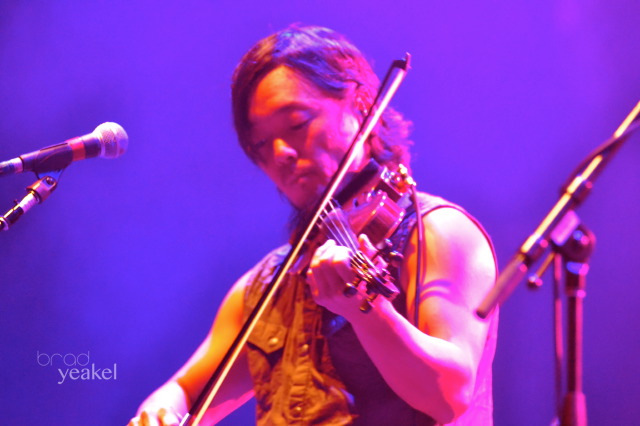 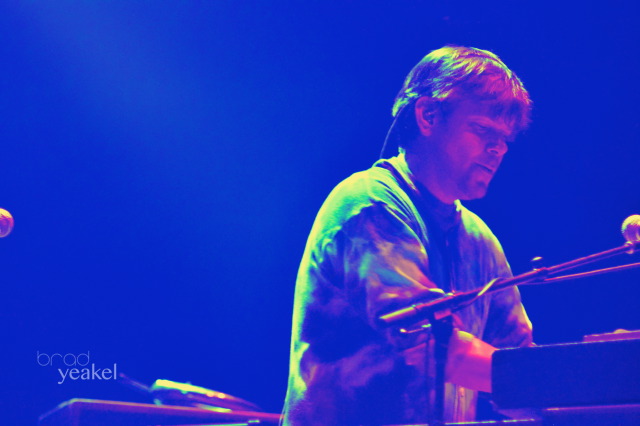 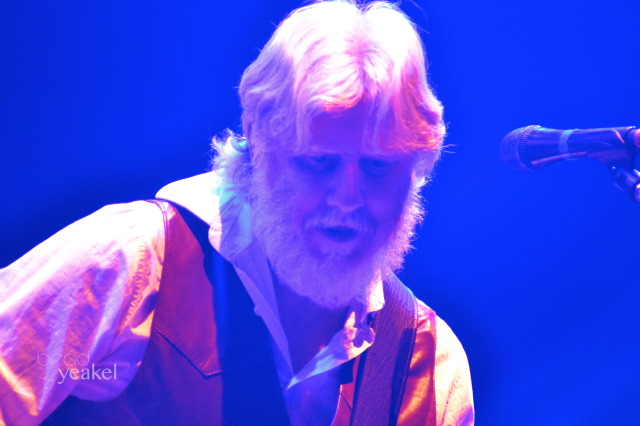 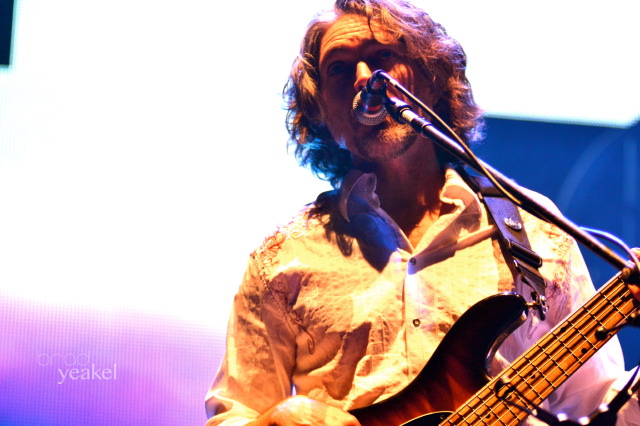 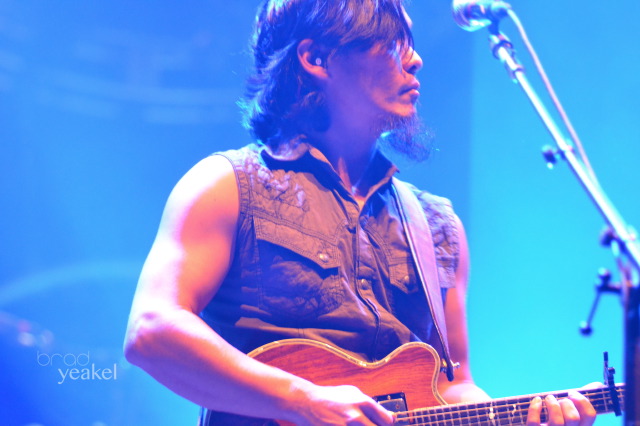 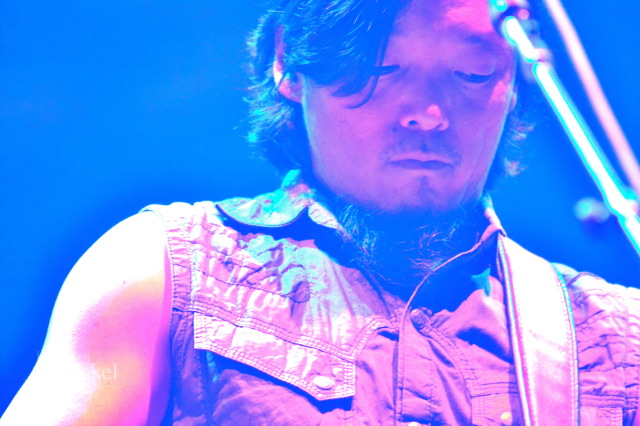 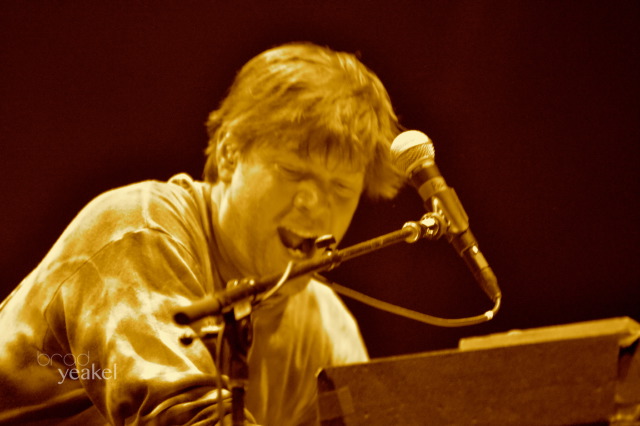 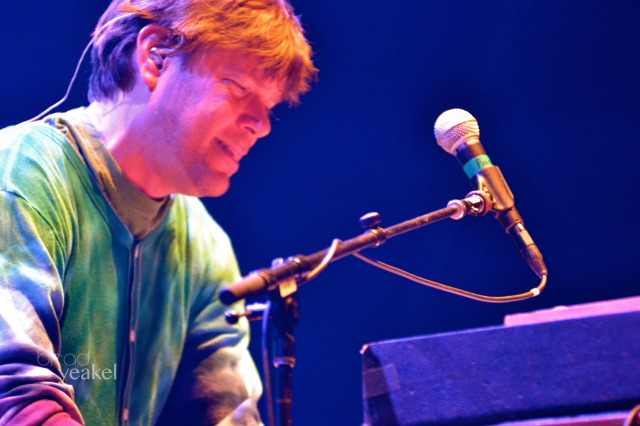 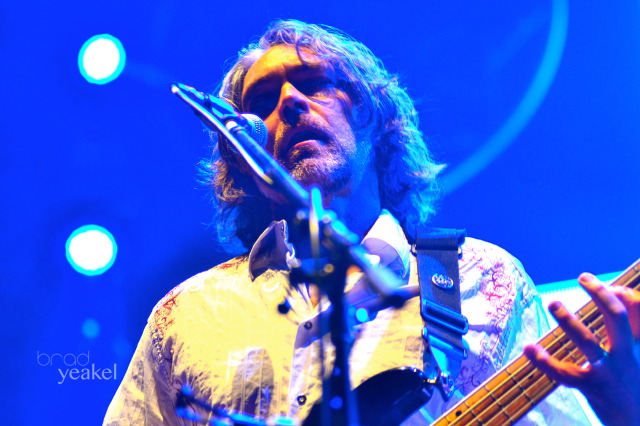 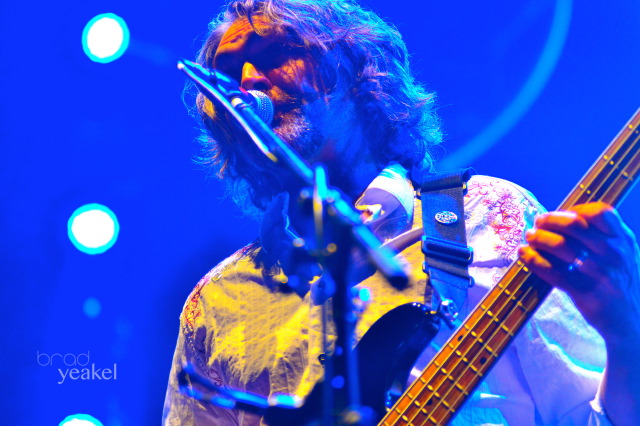 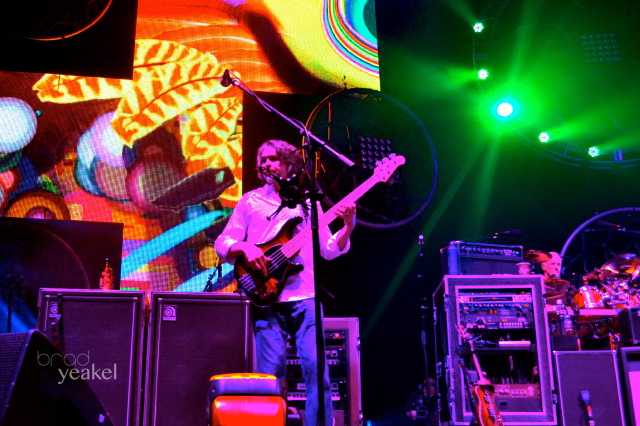 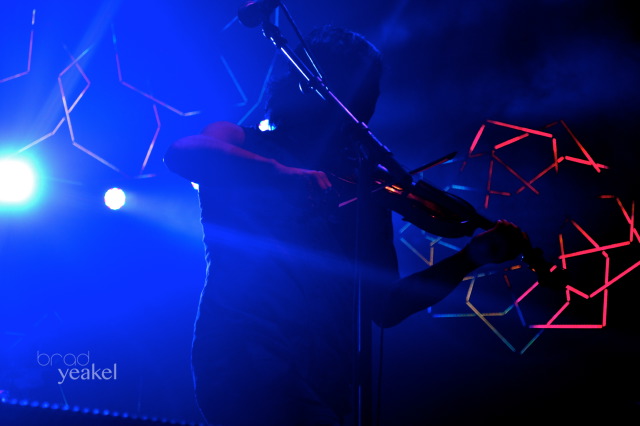 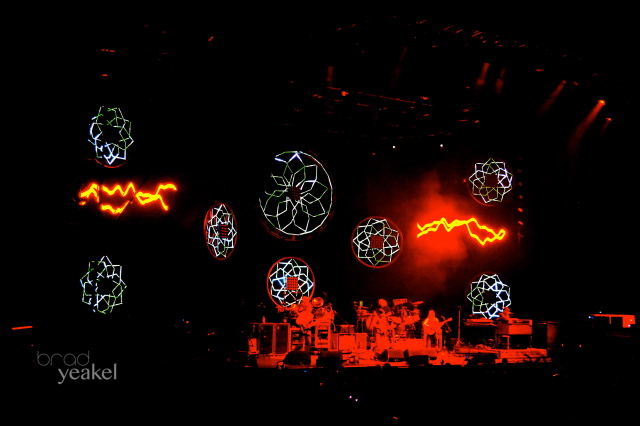 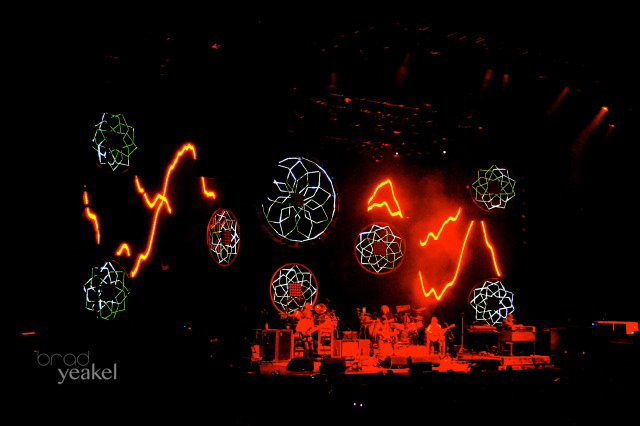 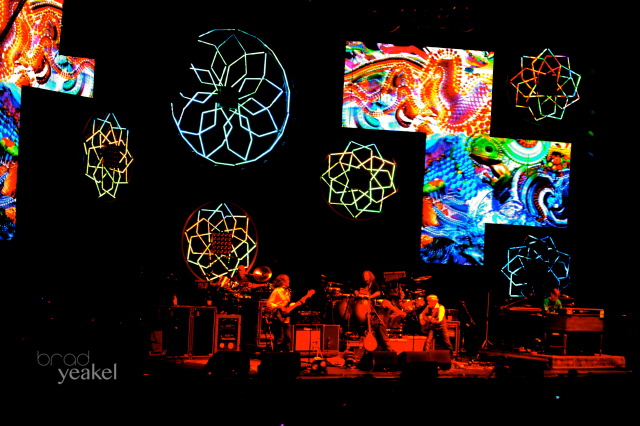 Photos and words by Brad Yeakel

I have seen the Flaming Lips twice before, and always thought they were more of a spectacle than a band. Admittedly, I was more excited to photograph their stage show than actually hear them live. When I entered the pit and saw the giant space-aged podium wired with LED lights and shiny mirror balls, I knew that I was indeed in for a spectacle. What I didn’t know was how impressed I would be with the music. The eccentric rock and roll touched on elements of electronic, industrial, and classic rock. Shades of David Bowie, Muse, Pink Floyd, and Nine Inch Nails added a psychedelic flavor to their brand of unusual and unique circus music. Their lights were ridiculous, and the overall experience was really interesting.  Not that they were exactly my cup of tea, but they were intriguing, engaging, and full of surprises. Wayne Coyne’s showmanship was undeniable, and his strange behavior was as much a part of the show as the music. For a few songs, Coyne held a toy baby as if his creepy rock anthems were lullaby’s meant for his child. Ultimately he swung the child around by his foot before abandoning him on the stage. My favorite song of the set was their trippy version of “Lucy in the Sky with Diamonds.”

When the spectacle was cleared away and Cheese’s gear was in place, I headed back to the pit to catch night 2. “Bollymunster” kicked the door in and left me optimistic that the show would be better than the previous night’s. Through “Sometimes a River> Rhum N Zouc” the band seemed to be having fun, and so did the crowd. When Wayne Coyne came out, the band played “Okie from Muskogee” referencing Coyne and Moseley’s mutual home state of Oklahoma. The tune was more of a novelty than anything, and seemed to sap the energy a bit. I’m not a huge fan of “Song in My Head,” but this version had a little more pep than the other times I’d seen it. It still wasn’t my favorite, but it seemed like they were finding their way with it. “Best Feeling” was solid and the transition into “Restless Wind” was unexpected. Though there weren’t any notable flubs in the set, there were very few magical moments. They were playing it safe, but it was cohesive and had a flow. That was true of both shows. It seemed like the playing was less ambitious and more self-congratulatory… As if the band was just relaxing and “taking in” their 20th anniversary party rather than trying to inspire us to follow them for another 20 years. I had a good time none-the-less.

Second set kicked off with crowd favorite, “Rosie.” The Tiny Universe Horns were joined by Steve Berlin of Los Lobos and made the discotronica a little funkier and more soulful. I enjoyed it quite a bit. What followed was the highlight of my weekend so far. “Mrs. Brown’s Teahouse” enveloped Jaco Pastorius’ tune, “The Chicken” before they delved into “Impressions” by Coltrane. The jazzy passage was tight, danceable, and restored my hope that the New Year’s Eve show could be something special. Then Dave Hidalgo of Los Lobos joined the band for the  Grateful Dead classic, Bertha. The crowd loved being treated to the singalong, and while the playing wasn’t spectacular, it wasn’t sloppy either. “Barstool” was pretty as usual, and cleansed the palette a bit. When “Joyful Sound” began, I knew we were about to get blasted with some electronica. Since the return in 2009, “Joyful” has consistently been the vehicle with which they deliver their EOTO jam. While I have an appreciation for their art, I wouldn’t complain if that was the last time I heard it.  I enjoyed “Joyful Sound” before, but the womp-bombs have never done anything for me. The EOTO jam faded and “Close Your Eyes” began, always a favorite of mine.

Citing the 20 year celebration, they invited one man band, Keller Williams, on stage for the encore to perform “Breathe” with a brief cover of Lourdes’ new hit, “Royals.”

I thought the show was better than the first night overall, but mostly because they didn’t have any real hang ups. I really enjoyed parts of the show, but hoped for a more adventurous night of music around the bend. Next up… Del McCoury and a New Year’s Eve Incident!