Trending Stories from The Marquee
You are at:Home»Cover Story»The Wood Brothers Release ‘The Muse’ While Working More Closely Than Ever
By Marquee Magazine on December 1, 2013 Cover Story, Features, Interviews 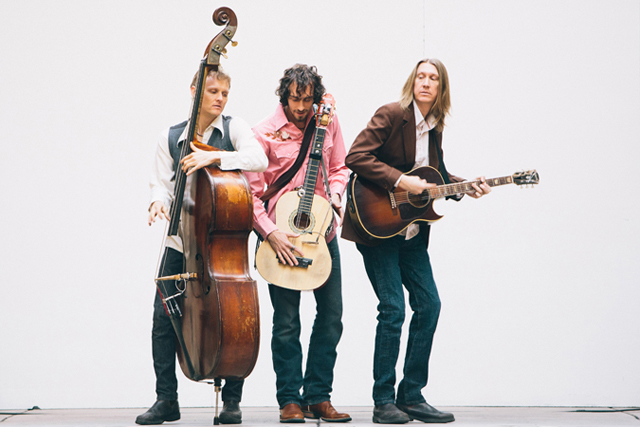 The Wood Brothers formed when Chris Wood of Medeski, Martin and Wood, and his brother Oliver of King Crimson decided to make music together while at a family gathering nearly a decade ago. Both were busy with their own projects, but the need to bond as brothers and make music as family prompted them to pursue the project.

Almost 10 years and five rock-solid studio albums later, they are reaping the benefits of spending more time together, both professionally and personally. Originally from Boulder, The Wood Brothers now call Nashville home, and for the first time since their childhood they are enjoying a tight sibling companionship while living in close proximity to each other.

“We are home for three weeks before heading back out on tour,” said Oliver Wood during a recent interview with The Marquee from Wood’s home. “We are all in Nashville now. My brother moved here this summer and I moved the summer before. Our drummer Jano Rix was already living here, and our sound man is here too now. We moved the whole operation to Nashville.”

The move has benefited and streamlined the group’s day-to-day operations, as well as giving them more time to work on their craft together. “It definitely makes things smoother in terms of traveling, and it has really changed the way we write and rehearse,” Wood said. “We’ve always struggled to have time to write other than when we were on the road, and we never got to rehearse before a tour. We had to show up in a city and start a tour sort of cold. Now, it’s exciting to be able to rehearse whenever we want. Chris and I now have the opportunity to play and write together in the same room instead of having to send pieces of a song back and forth, or having to schedule writing time backstage. We still work on stuff individually and then bring it to the table, but it’s been great to be able to just drive across town and get something done. By the same token, it’s been great for our families to be close so we can just relax and hang out socially. Before Chris moved here, the only time we really got to see each other was when we were working.”

Brothers first and band members second, Wood said that their proximity has brought them literally closer than ever, which was the goal of the group from its very inception. “Chris and I decided to start The Wood Brothers while we were at a family get-together, and our roots and relationship has always been combined with the music. So, living in Nashville is kind of a continuation of that,” said Wood. “It’s almost like we are living together again, like when we were kids, so the whole family thing has come full circle. The Wood Brothers has been the thing that has re-united us as brothers. Before we started The Wood Brothers we had really grown apart. We were living in different parts of the country and traveling in different circles. We hardly ever interacted and it felt like we weren’t that close at all. The Wood Brothers has brought us back together.”

The Wood Brothers released their latest album The Muse in early October, and the solidification of their relationship, and the welcoming of multi-instrumentalist Jano Rix a few years ago to their musical family, gives the album a sense of fullness that early Wood Brothers only hinted toward, both in sound and emotion. “This is certainly the most band-oriented album. Since we added Jano a couple years ago, he has really become part of the band and part of the sound. Not only did he play percussion on the album, but he played some amazing keyboard and melodica. It felt like we were all collaborating and had a stake in it. We also now have less boundaries. Jano is a great singer as well, and The Muse allowed us to make a three-part harmony part of our sound. We recorded it live at Southern Ground Studios here in Nashville, which is a great sounding room. The only external presence we brought in was some subtle horn on three tracks. That was producer Buddy Miller’s idea. We still have a couple songs on the album that harken back to our first album, which was very sparse. We still love that sound and like to feature it sometimes. In our live shows we do that all the time and strip it down kinda bluegrass style into one mic,” said Wood.

Stripped down or built up and enriched, The Wood Brothers sound has stayed true to its roots of Americana and blues blended with jazz and exploration. Now that The Wood Brothers are in Nashville together, they are allowing their already mature roots to grow further and cultivating their musical bond that is indeed thicker than water.