Trending Stories from The Marquee
You are at:Home»Brian F. Johnson»Drag The River Releases Eponymous Album After 17 Years Together
By Marquee Magazine on January 1, 2014 Brian F. Johnson, Features, Interviews 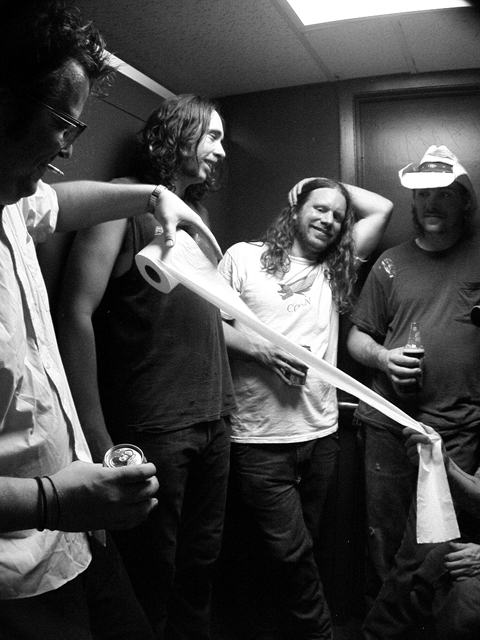 In many, many regards, Drag the River and Wilco couldn’t be more different, but both bands, it turns out, live under the same curse. If tomorrow they each recorded and put out some crazy avant garde speed metal albums, the two bands would still somehow, some way, be referred to as “alt-country” acts.

Drag the River’s two primary members, Snodgrass and vocalist/guitarist Chad Price, have been making music together as Drag The River for 17 years now. And as any relationship with that much history, both strikes and gutters have marked the scorecard over the years. The band has even had some time where they weren’t active. “I wouldn’t say we put the brakes on, but maybe we didn’t really have our foot on the gas,” Snodgrass said. “We used to make records every year and we just haven’t been doing that lately, but it’s in our DNA to go out and play shows, and now we have an actual record behind it, so we have to give everybody that chance to hear it.”

While the group is closing in on two decades together and have released a very substantial catalog to date, it took until early November 2013 for the group to release their self-titled album. Snodgrass joked that he didn’t know if they were brilliant or phoning it in on the album title, before clarifying, “We don’t phone anything in. I like the concept and the perception that we don’t give a shit, but we work hard at making it look like we don’t work really hard, and actually that’s not even true. We just do what we do,” he said.

The band, which recently played a tour up into Canada and down into Chicago — that culminated with a powerhouse show on a freezing cold Monday night in the Windy City — recorded this latest album at Black In Bluhm Studios, owned by Denver musician Chris Fogal of The Gamits and TaunTaun.

Price, in a separate interview with The Marquee, explained that on this tour and for the upcoming shows in Colorado, the group’s lineup consists of himself, Snodgrass, bass player Chad Rex (who played on the very first Drag The River album, but now lives in Kansas City and is not a full time member of the group), and former drummer Dave Barker is back on drums. “J.J. Nobody has been our bass player for 15 years or something,” Price said. “But he couldn’t come out on these trips, so we had Chad Rex fill in.”

With that lineup in place for the upcoming shows, both Price and Snodgrass are calling the current run of shows this month ‘rock shows.’ Snodgrass explained, “Dave is a rock drummer and Chad Rex is a rock bass player. It’s all about who you play with and we’re playing with rockers,” he said. “When I say that these are going to be great shows that shouldn’t be missed, I’m giving credit to the people that we’re playing with.”

While these shows may be manifesting with a decidedly rock flavor, Drag The River’s distinct sound is solidified and as Snodgrass put it, “When Chad and I play music, it all sounds like Drag The River.”

The two used to write material almost entirely separately, and sort of present songs to one another. But starting in 2010, when they began working on Drag The River and ended up releasing an EP with demos of some of the tracks that would eventually end up on the new album, the long-time musical partners started working more collaboratively. “When we started working on those songs we decided that every one of these songs needed to be touched by everyone, even if that meant just giving the song the o.k.,” Snodgrass said, adding that “I’ll play music with Chad until we’re dead.”