Trending Stories from The Marquee
You are at:Home»Cover Story»The Motet Releases Self-Titled Album That They View Almost as a Debut
By Marquee Magazine on January 1, 2014 Cover Story, Features, Hap Fry, Interviews 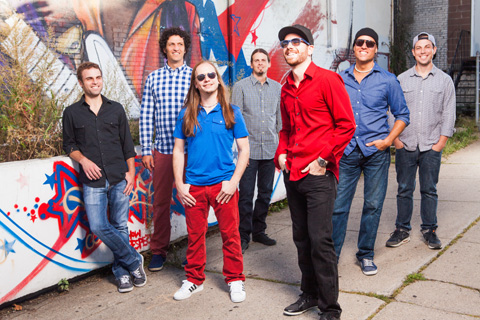 Take The Motet’s new album that will be released later this month at the Fillmore Auditorium. Their first album in four years is simply titled The Motet not because the group hit a creative wall, but because the self-titled approach really tells the story.

“We decided just to call it The Motet,” said drummer Dave Watts during a recent phone interview with The Marquee. “It’s kind of like a new beginning – like our debut CD.”

Though the funky-improvisational jam band has been a Colorado staple for some time, their lineup didn’t truly become stable until a few years ago.

“The difference is really that the band has solidified the lineup in that time period,” Watts said. “We’ve been playing with the same guys the last few years. Really, the biggest thing with this record is it’s 100 percent written by the band. Not only is that huge for us, that’s kind of huge for any band — just to be able to come together and be creative like that.”

Keyboardist Joey Porter said that since the lineup has become set, the group operates much more like a band now, which he said is what Watts always wanted.

“I think that’s what Dave intended anyway, but because there was no real band there besides him for a while, he was just kind of the guy in charge,” Porter said in a separate phone interview with The Marquee, during a break in rehearsal for the upcoming show. “He still manages the band, for lack of a better term, but it’s more of a democracy now with all of the musical decisions. A lot of bands wouldn’t want to do it that way — too many cooks in the kitchen. But we’re all such good friends, and we work so well together that it’s no problem for us.”

In addition to Watts and Porter, the other members of The Motet are: Garrett Sayers, Ryan Jalbert, Gabe Mervine, Matt Pitts, Jans Ingber, Kim Dawson and Serafin Sanchez.

Their new album — which will be available at the Fillmore gig — will feature nine songs, all of which have previously been played live. Those nine, along with several more, will be featured during what should be a raucous show at the Fillmore. The gig will feature support from Snarky Puppy, Orgone and DJ Mikey Thunder, as well as Jason Hann of SCI and EOTO, who will assist The Motet on percussion.

“Epic. There’s really no other way to describe it — just being able to play with all those great musicians,” Watts said. “Orgone’s one of my favorite bands out there. It’s just going to be epic, and it’s going to be visually epic as well.”

One thing The Motet does not lack is material to pull from. Their annual Halloween shows over the years, in which they’ve donned some incredible “musical costumes,” have helped them develop a pretty extensive pool of songs and Watts said that everything is on the table for the show.

“We’ve got a pretty big repertoire,” Watts said. “I mean, we’ve been doing these Halloween shows for like 13 years, and each of them has like 20 songs. We’ve got a lot of material to pull from. We’ll be pulling out something unusual (at the Fillmore).”

As popular as The Motet has become over the years, Watts is not so sure the group is known for any of its songs, but more for the dance party they put on during each show.

“I think we are a band that is surprisingly popular for how unknown our songs are,” Watts said. “People really don’t know our songs that well. They just know they’re going to have a great time at our shows — watch some improvisation and get to some psychedelic state, but it’s not like they really know our tunes.”

That could all change with their newest album. The group has a new video for its song “123,” and there should be a couple of others that will resonate with fans.

“I guess we really don’t have a hit tune, but I think there’s a few songs on the new album that could possibly be that,” Porter said. “Most of the songs on the album are going to be that way — not necessarily pop music, but in that format with vocals in all the tunes.”

Along with a new beginning, the new album also might signify a shift in ideology and approach for The Motet.

“It’s like, well, we can play all these incredible songs by all these incredible artists that we’ve proven over various Halloweens,” Watts said. “All we need to do is write songs that good, so that’s what we’ve been doing. For us, we want to do more of that — writing great songs that people are going to get to know, with lyrics that hopefully resonate with them and have that take us to a new level. We just want to expand our horizons all over — not just in the United States, but Europe, Japan and Australia. We want to do all that.”