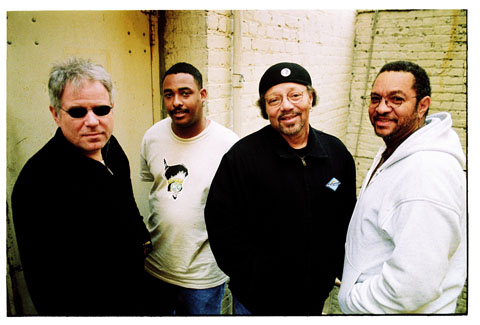 Throughout all of the changes and projects, George Porter, Jr. has been putting the stank on the bottom end as the constant driving beat behind the bands, no matter their lineup or repertoire. Porter, the road warrior, founding father of funk and legendary bass player, explained the various Meters incarnations a bit more, when he sat down with The Marquee in person at his home in New Orleans. “The Funky Meters tend to play more than Meters songs,” explained Porter, who had just gotten off the boat from Jam Cruise, and was preparing to head to Japan with The Funky Meters. “We stretch out and play other stuff that members of the band like. The Original Meters will only play Meters songs. Then we have The Metermen, which is Zigaboo, Leo and myself, with a keyboard player. Page McConnell from Phish plays keys with us, but John “Papa” Gros (Papa Grows Funk) and Rich Vogel (Galactic) have all played keys with The Metermen too. The Metermen tend to play all Meters songs as well.”

It can all get a little bit confusing, but the music that Porter and his companions make was never meant to be straight-forward. And whether he’s playing with folks he’s partnered with for decades or for the first time, Porter said that he’s most comfortable exploring music without any script or direction. “On Jam Cruise this year I played with a five-piece I had never played with before. It was DJ Logic, John Popper (Blues Traveler), Adam Deitch (Lettuce), Stanley Jordan and myself. I didn’t meet up with these musicians until our second day at sea when we were doing an autograph session, and we had two 90-minute sets to play that night. Someone looked across the table and said, ‘So what are we gonna play tonight?’ Then everybody kind of said, ‘We will play in G, B flat and sometimes in E.’  That’s what we did. We went on stage and Stanley started off a guitar movement, and Adam and myself joined in and created a pocket against his airy guitar, and when we stopped after the first 90-minute set, I realized we had only stopped playing twice during those ninety minutes. The rest of the time it was continuous improvisation. We didn’t play a copyrighted piece of music the whole night. We were supposed to be a jam band, right? Well we were!” said Porter.

Another musician Porter finds himself playing with, at least once annually for the past decade, is The String Cheese Incident’s keyboardist, Kyle Hollingsworth, who together play in The Pearl Street All-Stars each year for the event that started in 2003. “This will be my tenth year playing The Mountain Sun Funky Good Times Benefit with Kyle Hollingsworth. Every year, the only two players that are the same on stage are Kyle and myself. With Kyle and I and the other members, we spend a day running through songs together and figuring out what not to play,” Porter said.

The show, which is a benefit for KGNU 88.5 FM, also marks 20 years of business for The Mountain Sun, and it will also serve as a kick-off to the Sun’s annual Stout Month. In addition to Hollingsworth and Porter, the lineup will include members of Lettuce, The Motet and Mofro.

Porter is all funk, but he loves playing with fresh faces from bands he may have never really listened to, and for Porter, that’s what keeps his whole world revolving. “I have been extremely lucky and have been able to play with musicians who don’t half-step at all, no matter if they are playing Meters tunes or going to the show and shooting from the hip,” said Porter.