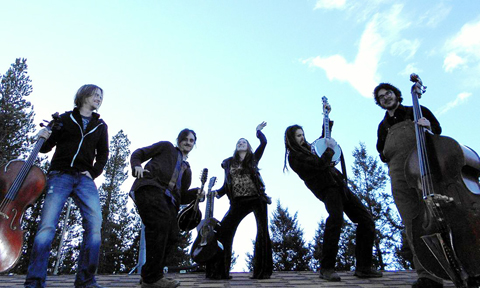 They were almost ready to pat themselves on the back, to give each other kudos on a job well done. The year-and-a-half they had spent preparing for it and the additional six months they had spent directly working on it had wrapped. Gipsy Moon’s debut album Eventide was so close they could almost hear it. But just as they began mixing the record the flood of 2013 swept down the canyons, taking with it the studio where they had recorded their prize — not to mention the home of Dave and Enion Tiller, who owned The Distillery Room studio in Lyons, which was located at the confluence of the two raging rivers.

“Technically, we weren’t even fully finished when the flood came. We had just started mixing,” said banjo player/guitarist/vocalist David Matters in a recent interview with The Marquee. “David Tiller had been mixing it, and so he had it on a hard drive, and the night that the flood started he ran out and saved it. We were freaking out for a minute before we knew what happened. We were the last project in there before it got washed away.”

Matters went on to explain that the Tiller’s home and studio had been a base of operations for the band during the recording process. Gipsy Moon hired Lyons resident and Elephant Revival guitarist/multi-instrumentalist/vocalist Dan Rodriguez to produce the album and while the whole process didn’t stretch on for long, Matters said that the band was certainly focused on the task at hand. “We got a lot of recording done in the first week, but we were spending 14 to 15 hours a day recording and then we slept in Elephant Revival’s old bus, which was conveniently located just up the road there,” he said.

As a producer, Rodriguez turned out to be a huge help to the band, Matters said, and really assisted Gipsy Moon in putting its best foot forward on the release. “He did a lot,” said Matters. “He did a ton for us. We’re all friends with him already, so it was good to have that connection, but we’d sit down at night and have a couple drinks and talk about the music. He helped us with arrangements and we’d play some songs and he’d give us some suggestions. He was very helpful throughout it all.”

Gipsy Moon understands the value of that guidance because from their very early beginnings they have had a mentor who helped guide them on their earliest steps as a group. In addition to Matters, Gipsy Moon is comprised of Mackenzie Page, Andrew Conley, Silas Herman and Colin Huff. The latter two, Huff and Herman, are the sons of Leftover Salmon frontman Vince Herman, and some of the group’s earliest practices took place right in front of the slamgrass legend.

“Vince did so many good things for us. Very early on, he’d be sitting there in the kitchen, smoking a bowl and listening to us play and he’d be like, ‘Well, let’s play that to a metronome,’ or, ‘Why don’t we try a solo part there?’ When he moved away [to Oregon]a lot of that stopped, but he’s been so supportive of this project,” said Matters.

Huff, in a separate conversation with The Marquee, agreed that his father was instrumental in Gipsy Moon’s roots, but said that the doors didn’t bust wide open for the group simply because two of the members have Vince Herman as a dad. “I mean, first of all, I wouldn’t have even been playing music if it wasn’t for my dad. Music has always been an opportunity that he made available to us. If we decided we really wanted to do something he’d offer connections that we might not otherwise have access to, but we, as a band, still need to put forth our case. People have noticed us a little quicker, but passed that is where our side of things comes and it’s up to us to prove how we’re going to perform and interact with the promoter or the venue, or the audience. He [Vince] was essential in that formative phase, and sitting in on shows with us was a huge help, and it’s nice in the fact that when he gives us advice, he probably knows what he’s talking about,” Huff said.

Vince Herman knew enough at least to help guide Gipsy Moon to the point where they could create Eventide, an album that, while steeped in bluegrass instrumentation, lands far away from most G/C/D bluegrass arrangements. The band focuses on minor tunes with jazzy chord progressions and pushes their harmonies toward gypsy influences. “Gypsy grass?” Matters said. “Obviously it’s a name and everyone has a title and a label, but we do have a different approach to the music and that’s what we recorded here.”