Trending Stories from The Marquee
You are at:Home»Brian F. Johnson»Houndmouth Rises Triumphantly ‘From the Hills Beneath the City’
By Marquee Magazine on February 1, 2014 Brian F. Johnson, Cover Story, Features, Interviews 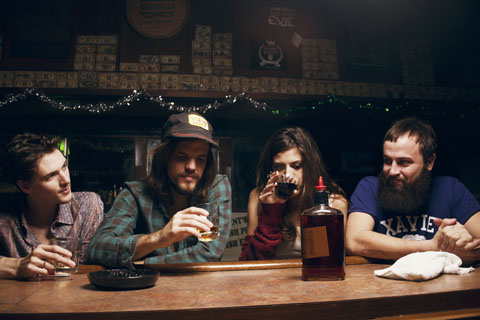 “Poker chips, chains and whips/ They got me wearing red lipstick/ And I can’t trust no man of mine/ To watch the door while I do my lines/ Yeah, they got me doing bad things,” sings Houndmouth’s  Katie Toupin on the band’s single “Casino,” from the group’s 2013 debut LP From The Hills Beneath The City.

That song is followed by bandmate Matt Myers singing “Comin’ Round Again,” where he tells a tale about making money slinging coke.

To put it lightly, the characters in Houndmouth’s songs, who also shoot, rob, spend time in jail and spend money on “various things,” as well as a whole host of other bad decisions throughout the album, make it seem like the members of the group might need some counseling, right-quick.

But guitarist/vocalist Matt Myers explained that the songs aren’t autobiographical — at least not entirely. “We all come from good families,” Myers said in a recent interview with The Marquee, “and when you don’t have any problems you have to create problems, and create that turmoil. We were all writing about the same subject matter individually, but the album sounds very cohesive even though we all wrote it separately.”

Before Houndmouth formed, Toupin and Myers had been playing acoustic shows together in New Albany, Ind., just over the Ohio River from Louisville, Ky. Myers and guitarist-turned-bassist Zak Appleby had played in cover bands together for years. And Toupin knew drummer Shane Cody, whom she’d gone to high school with. When they first got together to play they did so without expectation, but quickly realized they were onto something. “When we all four got together and finally got a working, decent organ and started putting harmonies together, it was almost like we looked at each other and said, ‘This is pretty good stuff.’ Not in a conceited way, but in like, a ‘We’re working on this together and this could be nice,’” Myers said.

The band self-recorded their first EP at Cody’s family’s house, a huge historic home, according to Myers, that has been in Cody’s family for generations. When they took the EP to SXSW they caught the attention of Rough Trade Records, which provided a proper studio and released the full length.

From The Hills Beneath The City is full of rich storytelling, soaring guitar licks and chock full of rock and roll harmonies. It’s delicately gritty and portrays a subdued chaos that is both raw and tight.

But even before the album was released, the band was being lavished with critical praise. They opened tours for Drive-By Truckers and Alabama Shakes, played late night television shows and seemingly every summer festival in 2013.

As the attention was building, Houndmouth was on the road, aware that they were growing something, even though they were sort of disconnected from it. “We kind of knew what was happening to some degree, but we were still very unplugged from everything. We knew we had made some good contacts and they were helping us out, but we were still working on material and touring and still in the van every day,” Myers said.

Myers admitted that as far as Houndmouth is concerned, he and his bandmates have had a pretty lucky go of it, skipping over some of the hard van touring days that most bands go through, but said that it hasn’t been a walk in the park, either. “This is kind of the first time where we’re not experiencing [that crunch]. Basically, the first year-and-a-half, we’d gotten this hype but we’d still come home from tour broke. So we’ve definitely still paid our dues — not to the extent that I know some bands do — we definitely lucked out early, but we’ve still had some crappy gigs. Our dues have been paid individually beforehand, like when Katie and I played a four hour gig at a winery. It was awful,” he said.

But now, Myers said, Houndmouth is ready to get back to creating some new music to release. He said that after they complete this tour, and some more select gigs this summer, they plan to head back to the studio to begin work on their sophomore effort. “We hope to be recording fairly soon, we’re not pushing too hard, but we were ready for new shit before anyone even heard the EP. It’s been a couple years of repetition. This year we’ll be pretty wary of our time, and since we hit the festival circuit so hard last year we won’t be repeating that. But I’d like to take a lot of time to record. Playing live is fantastic, but I think that every band at some point would love to do the whole Beatles style — go into a studio, make an album and never tour behind it.”