Trending Stories from The Marquee
You are at:Home»Cover Story»Jamestown Revival Capture the Sound of Wasatch Cabin on ‘UTAH’
By Marquee Magazine on February 1, 2014 Cover Story, Features, Interviews, Timothy Dwenger 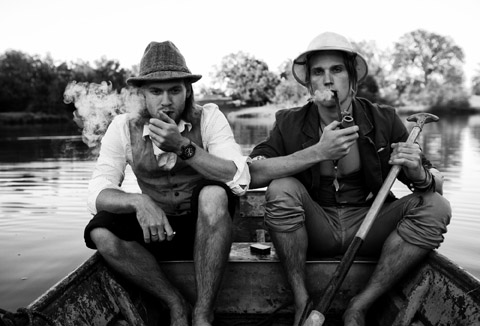 What happens when lifelong friends decide to hitch their wagons together and go into business?  Well, often it ain’t pretty, but in some very rare cases the years of late night conversations, heated arguments and roadtrips prove their worth and the result is something very special.

This is the case with Jamestown Revival, a duo that draws inspiration from Jonathan Clay and Zach Chance’s roots in the rural east Texas town of Magnolia.  “Jamestown Revival is essentially John and my’s baby, if you will,” Chance said during a recent interview with The Marquee, as he got ready to embark on the band’s longest tour to date. “It’s pretty much formed around the idea of our friendship and our adventures and mishaps and collective experiences together. It’s a very autobiographical project.”

Having written their first song together at the age of 15, long before the formation of Jamestown Revival, the pair had a reason to believe that this sort of endeavor would work. “I think we figured out pretty early that we could craft and create together and we started recording, writing songs, and singing together. Jamestown Revival grew out of that, but it was never anything really serious until we were in our twenties,” Chance said.

When they did get serious, they decided to head west and ended up making the decision to move to Los Angeles. “We knew we wanted a change of scenery and it seemed like everyone was going to Nashville, so we thought we should go the opposite direction,” laughed Chance. “So we went to California for an adventure, a change of scenery and the result was that we were extremely uncomfortable. So, in a way, we couldn’t have been any more lucky!”

The pair took all those edgy feelings that the Left Coast gave them and fed the creative fire that burns so brightly on Jamestown Revival’s first full length, UTAH. Due out this month, UTAH’s songwriting is full of vivid imagery and the songs drip with thick harmonies in a homage to the influence of legends like Neil Young, The Band, and even Credence Clearwater Revival (to whom the “Revival” in their own name is an ode). It’s a record that could have come out of Laurel Canyon in the 1970s, but instead it came out of the Wasatch Mountains of Utah in the 2010s.

Chance admitted that, when they had finished writing the songs for the album and were ready to begin making an album, “nobody was interested in recording us.” So, in true DIY fashion, Jamestown Revival took it upon themselves to make something happen. “I guess we’re old souls in the sense that we like to do things with our hands and we like to go about doing things the hard way, because we know when we do it that way the rewards are a lot greater. We figured, ‘Well, we’re decent enough and we have talented enough friends and people around us to probably pull something out of our asses,’” Chance said.

They set about planning. The first step was to get access to the cabin they eventually converted into a temporary recording studio in Utah, and then it was a matter of convincing their friends to join them. “We sold all our friends on the idea that, ‘Hey, we can pay you very little money but we can load up all this old gear and set up and stay in this cabin for two weeks and record a record in a way that people used to do. Just sit around, live takes, no click track, no headphones, just playing music.’ We wanted to capture the energy of a live show and really nail the moments within the songs,” Chance said.

This time honored traditional method of recording worked beyond explanation and the raw energy that comes across on each of the record’s eleven tracks is a portal directly back to that cabin in the woods. “The cool thing is having the cabin as the fifth member of the band on that record,” Chance said. “You hear that cabin in everything — that sound is that cabin in the Wasatch Mountains of Utah.”