Trending Stories from The Marquee
You are at:Home»Features»New Keller Williams Project tackles Funk ‘More than a little’
By Marquee Magazine on February 1, 2014 Features, Interviews

:: w/ Nicki Bluhm and The Gramblers and JJ Grey and Mofro :: 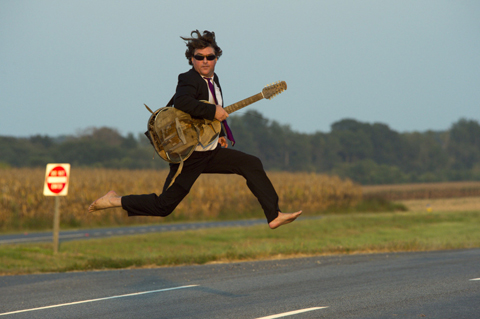 Songwriter/multi-instrumentalist and one-man jam band Keller Williams left the East Coast a year after releasing his 1994 debut album Freek, and his two-year layover in Colorado helped set the stage for his now twenty-year career as a recording artist. From bluegrass to funk, children’s songs to piano versions of Grateful Dead tunes, Williams switches genres and instruments almost as often as he changes the air in his lungs.

Each of Williams’ albums explores new territory, and his latest release Funk sure doesn’t fake it. True to Williams’ air of spontaneity, it was a local weekly music night in his home state of Virginia that helped point Williams towards the Funk. “Toby Fairchild, the drummer in More Than A Little, which is the band on Funk, and the band I am currently on tour with, was running a R&B night on Tuesdays in Fredericksburg. He had a rotating cast of musicians, and the one night I was there he had the members of the band I am currently playing with,” Williams said in a recent interview with The Marquee. “I was forced — by force — to sit in. I actually got grabbed by the ear and pulled on stage. Once I got up there, we clicked. We really connected. I put that in my back pocket. Each year between Christmas and New Year’s I do a run of shows, and I like to put together a new project. More Than A Little is one of those projects. We recorded our run of shows at the end of 2011, beginning of 2012, and out of those shows came this record, which we released at the end of 2013.”

Williams releasing an album with a funk theme might not have been a surprise to his fans, nor was it to Williams because there has always been a bit of funk coming from his fret board, whether he was playing bluegrass-based material with the Keels or The Travelin’ McCourys, or playing tracks of his witty breakout album Breathe. “Funk music is like breathing. In all my projects, even the bluegrass ones, there are always little elements of funk that come through in my style. My right hand rhythmic style is always looking for a backbeat while my picking style is focusing on the bass line. I really feel funk is a sense of rhythm you are born with,” he said.

Williams is an unabashed Dead Head and he said that part of this project was inspired by the funkier side of The Jerry Garcia Band. “I have always been into the Grateful Dead and the Jerry Garcia Band, and part of the inspiration for this album was that JGB sound, but I didn’t want to do JGB songs,” he explained.

Williams has had ties to Colorado since his childhood, and he credits his mountain relationships with fueling his career. “My parents took me out to Steamboat and Crested Butte when I was a teenager. Steamboat was a place I always wanted to return to. I moved out to Steamboat Springs in 1995, and lived there until 1997. On my quest west, my first stop was in Telluride for the Telluride Bluegrass Festival, as a spectator. That was when I saw The String Cheese Incident for the first time,” Williams said. “They were an acoustic four-piece playing in a small bar below the post office. The place must have held 50 or 60 people. I was hooked from that first show, and went to a couple little ski towns that summer to see them play. I got to meet them that summer, and the following January I opened for them at the Fox Theatre in Boulder. Then, from the spring of 1997 until the end of 1999, I opened many, many shows for them. The String Cheese Incident recorded my Breath album with me, which was released in 1999. String Cheese really gave me the exposure I needed at the time. They took me out of the restaurants and put me in real music venues. I had an amazing time with them back in those days.”

The Breath album with String Cheese was Williams’ fourth studio release, and it’s when he really attached himself to the notion of making concept albums. Each of Williams’ sixteen studio releases is titled with a one syllable name, and represents a theme that flows throughout the album. Williams explained, “I started making CDs in 1994. After Freek, Buzz and Spun, I really started focusing on concept albums. I wanted to take it a step further, and really put some thought into my albums. As far as the one syllable title goes, during the project there is usually a one syllable word that will present itself, that kind of describes the whole vibe of the project. It names itself usually. The songs are all usually road tested before I go in and record an album. Whenever I write a song, I need to play it right away in front of an audience. I can never wait.”

:: Keller Williams More Than a Little::

:: w/ Nicki Bluhm and The Gramblers and JJ Grey and Mofro ::