Trending Stories from The Marquee
You are at:Home»Features»Marvel Years Returns to Denver with New Tracks and More on the Way
By Marquee Magazine on March 1, 2014 Features, Interviews 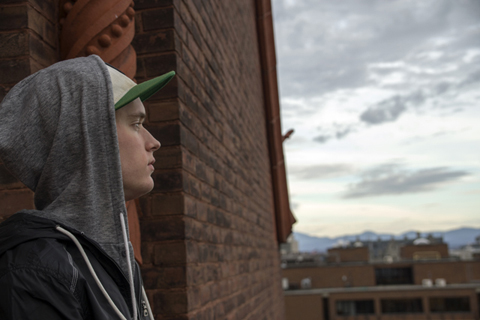 Most musical acts wait years and years for their chance to step out on stage at the legendary Red Rocks Amphitheatre. Nineteen-year-old electro hip-hop producer Cory Wythe waited about 30 days. In August 2013, a mere month after his live debut supporting Pretty Lights and Elliot Lipp in Boston Mass., the Vermont native, better known by his stage name “Marvel Years,” checked Red Rocks off his musical bucket list. The enormity of the moment was not lost on him. “Amazing,” said Wythe in a recent interview with The Marquee. “It’s just the only way to describe it. First time at Red Rocks. Soldout show. I got to kick it with all my homies there. It was definitely mind-blowing.”

Less than a year later, Wythe is westbound again, this time for two nights of music in Denver, albeit at slightly less epic venues, but Wythe is, simply put, stoked. In addition to performing original live music at The Armoury, the first of his two Denver dates, he will also be performing there with the weekly Hump Day Funk Jam. “I’ve got a bunch of new songs that I’m putting together right now that I’ll be dropping there and I’ll have my guitar with me. So yeah, it’s gonna be a fun night for sure. I think the funk jams will be sick at the Armoury too, so I’m excited for that,” said Wythe.

Yes, in addition to shredding his laptop, Wythe plays guitar, too, and it’s a big part of what separates him from the rest of the budding artists in the electronic scene. Wielding a Soundcloud library and a handful of EP’s wrought with both original electronic music and classic rock remixes, Wythe is determined to bring something new to the EDM table. “I’ve been playing guitar since I was 11,” he said. “It’s always been my dream to play guitar as a living. And now I can use my guitar to help produce the kind of music that I want to. And it’s fun because it really pushes my musical boundaries. I get to bring the guitar into it, so I really think it gives me a lot more creative control when I’m making my music. Plus, I think it brings something new to the crowd because they’re not really expecting it coming in. So when I bring the guitar in, it brings that live aspect to the show that just makes it that much more exciting.”

Wythe uses contemporary influences like Grammatik and Tycho to mold his sound, but a large part of his style stems from the classic rock of groups like The Who, The Rolling Stones, and even folk heros Crosby, Stills, Nash and Young. “Classic rock has been a huge influence on me,” he said. “I love breathing new life into those older songs. And I think that’s a good medium for bringing new listeners into my music because they can relate to that stuff. I improvise over a lot of my stuff. Especially in the upcoming shows, I’ll be taking parts of my songs and looping them for longer periods of time than what was previously recorded. So, it’s more fun for me to be on stage and just be able to jam out.”

Since he began churning out original music in 2012, Wythe has skyrocketed to the forefront of the electronic music scene. In the last six months he has shared the stage with electronic masters such as Griz, Lotus, and Pretty Lights. In December, Pretty Lights released A Color Map of the Sun Remixes, which features Marvel Years’ remix of the song “Where I’m Trying To Go,” one of Wythe’s favorite Pretty Lights songs. Marvel Years is rapidly picking up steam and the producer/musician is going to carry that momentum into a new project that he’s begun work on. “I’m working on an EP right now that I’m hoping to have out in the next month-and-a-half or two months. Just gonna keep pumping out music, man. New music is on the way,” he said.

But in the immediate future Wythe is mainly looking forward to the upcoming Denver run, saying he’s hoping to score his musical drug of choice during the gigs. “Energy, man. I want to put as much excitement and energy into it as I can and hopefully the crowd gives me the same thing,” he said. “I really feed off their energy so the more they can give me the more I can give them. I love Colorado man. It’s my favorite place to play. Crowd reaction and everything about it is just perfect for my style of music. So I definitely love going out there every time.”