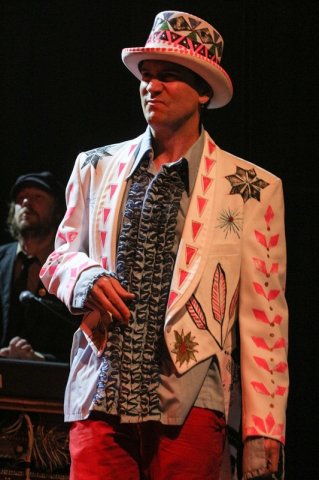 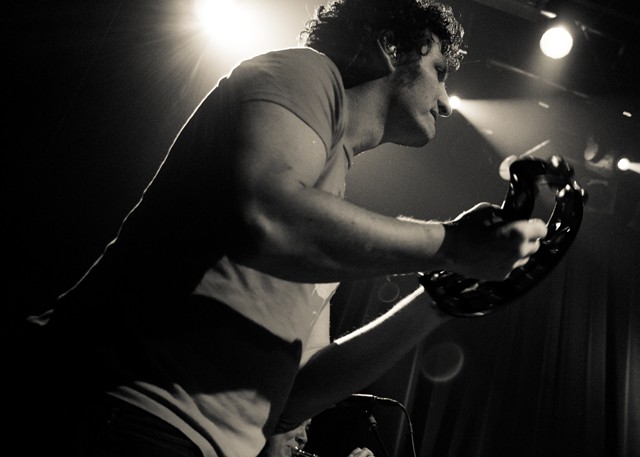 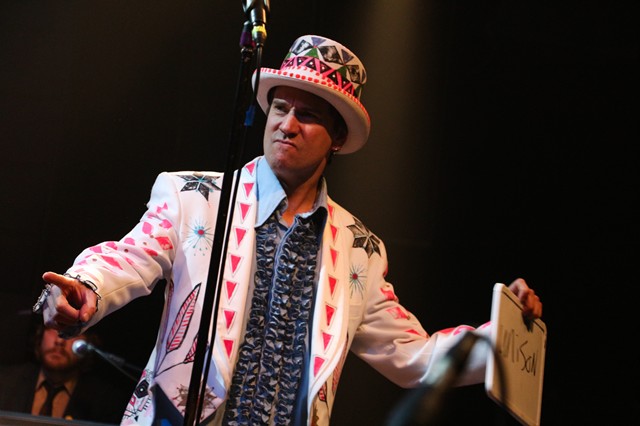 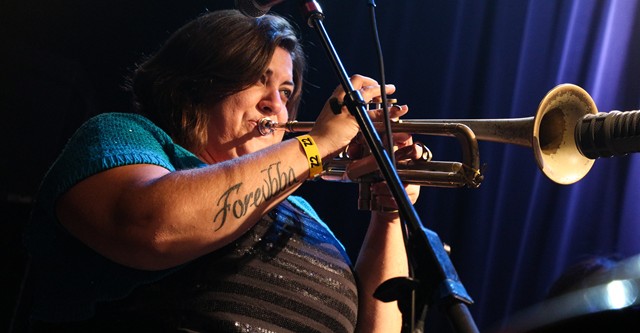 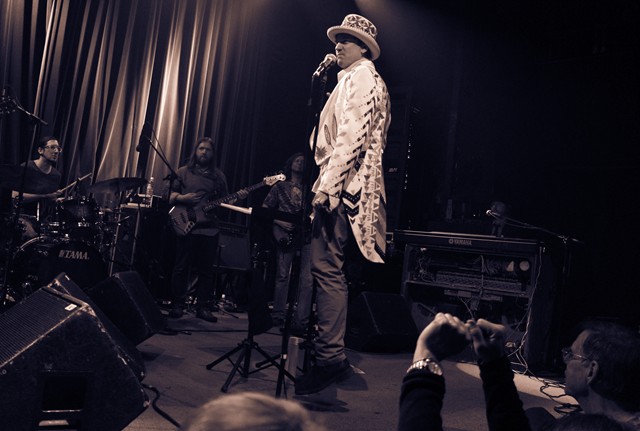 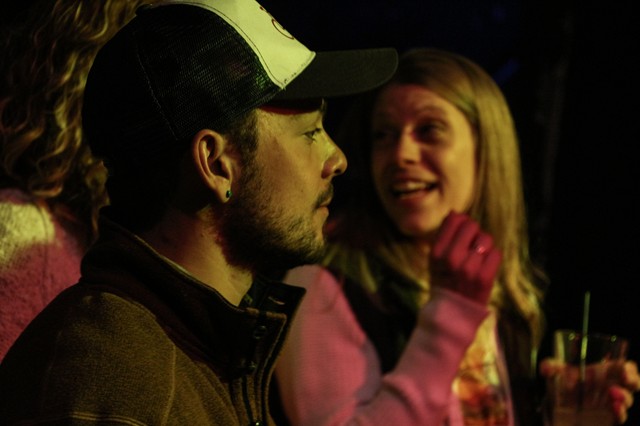 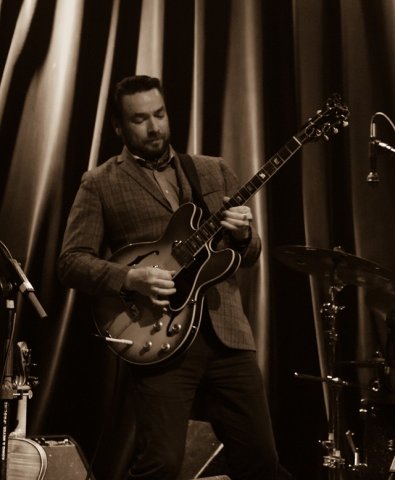 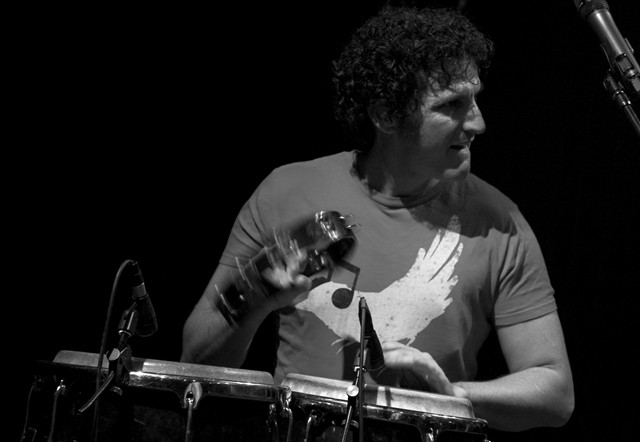 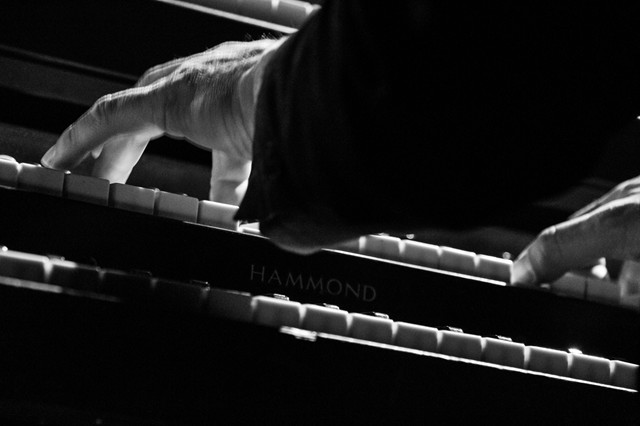 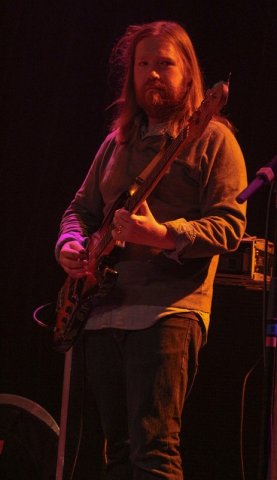 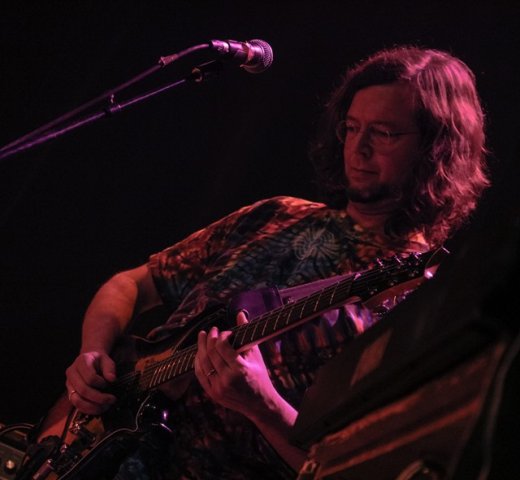 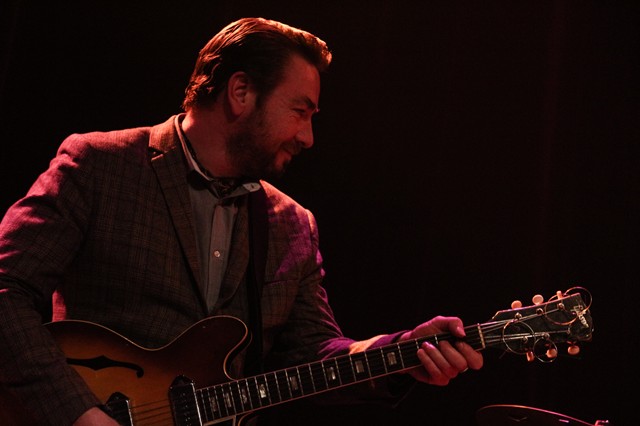 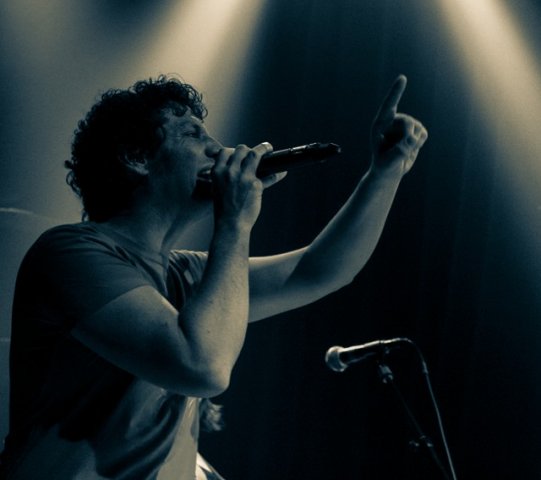 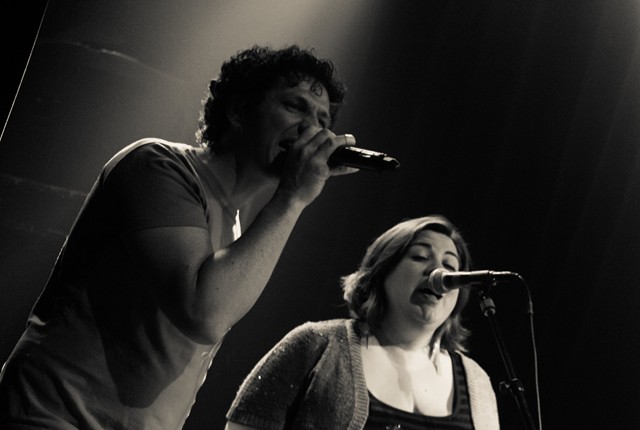 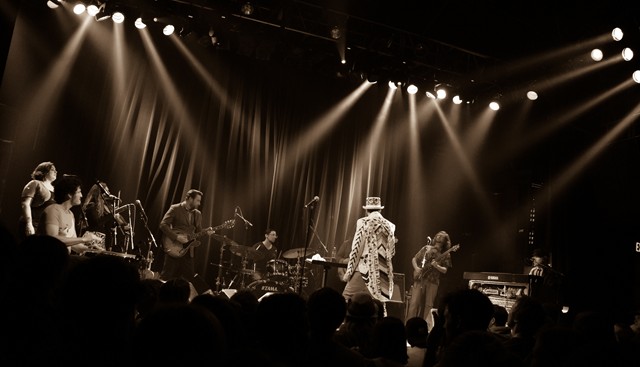 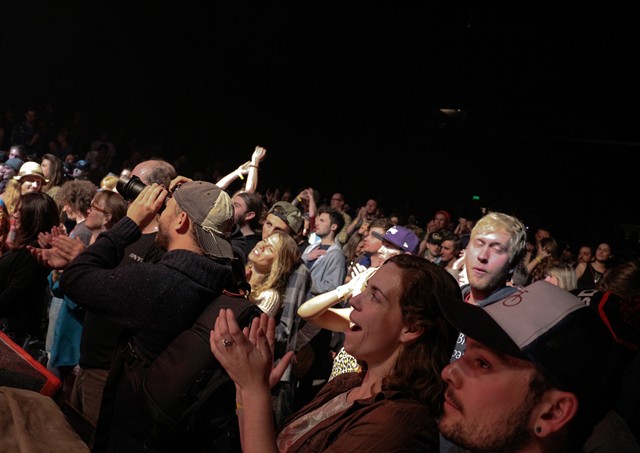 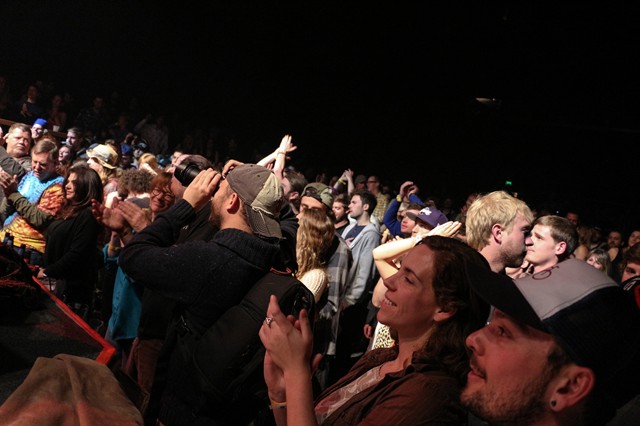 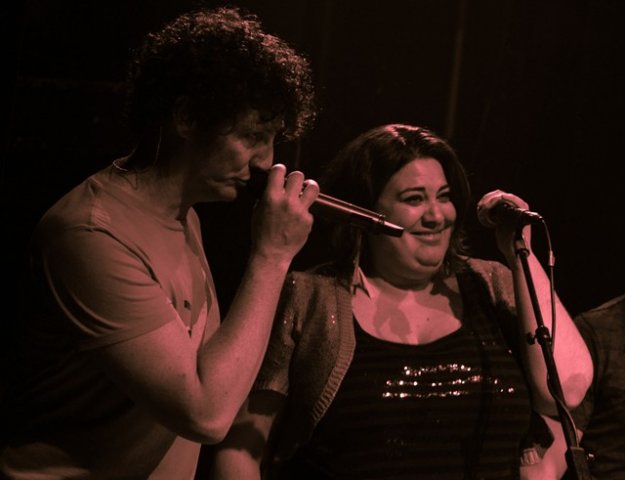 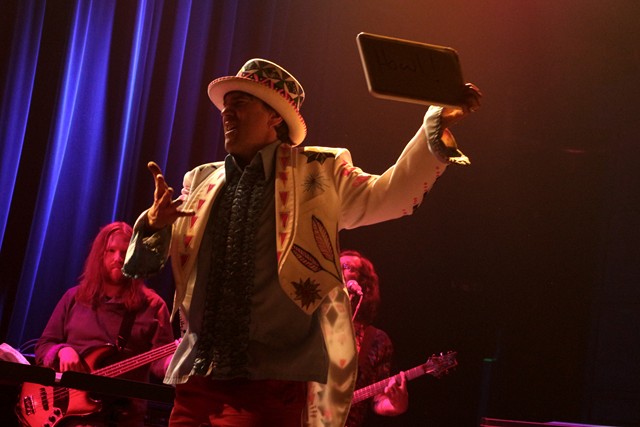 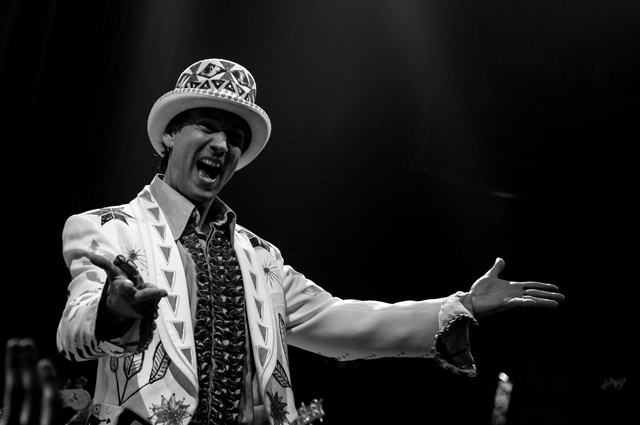 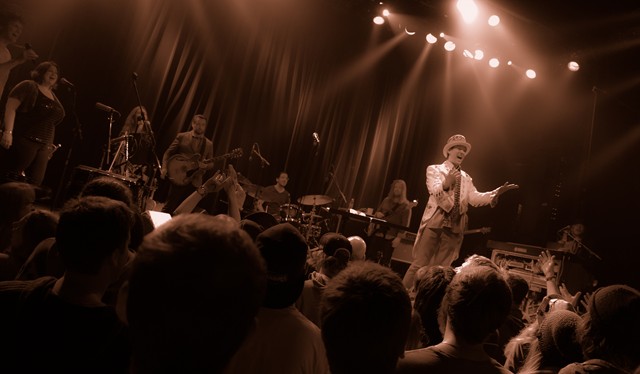 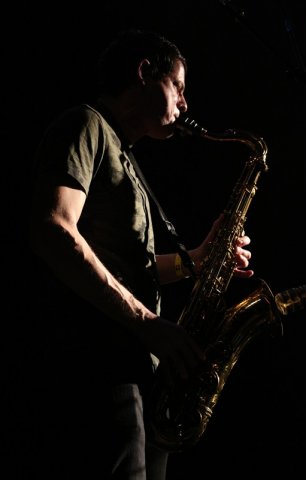 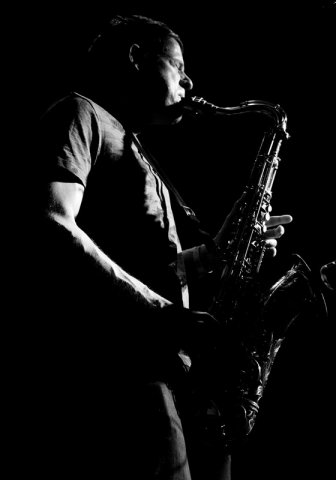 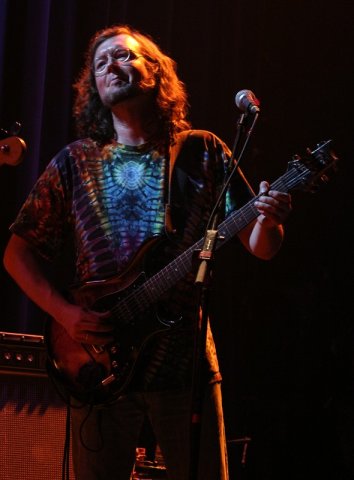 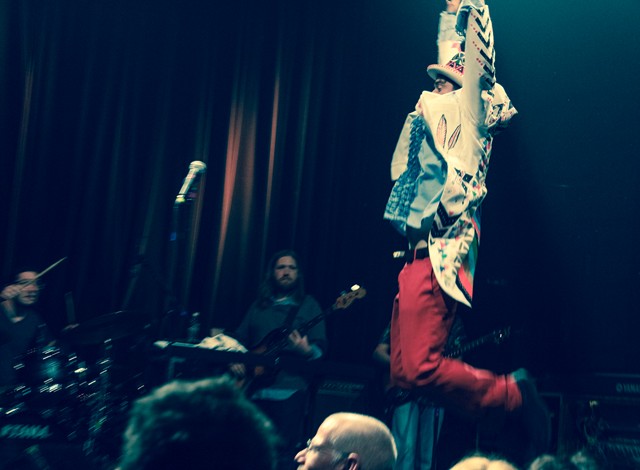 Photos and Text by Derek Miles

What’s in a jam? That which we call music, by any other name would sound as smooth.
Everyone Orchestra is a culmination of musical worlds colliding harmoniously through improvisation or improviso; Latin for the “unexpected.” For those unfamiliar with the project, it is essentially what it sounds like. A group a musicians led by a conductor, Matt Butler. However, you’ll not find any sheet music here. The lineup of musicians is in constant regeneration, with this particular show enlisting the talents of Jans Ingber, Jennifer Hartswick, Bridget Law, Eddie Roberts, Jeremy Salken, Reed Mathis, John Kadlecik, Trevor Garrod, and guest appearance by Dominic Lalli.
Springdale Quartet got things started off right with their eclectic and electric brand of instrumental tunes for dancing feet and curious ears. The set also included material from their latest release, Heist. Perfectly paired in preparation of the main act, Springdale Quartet made for a seamless transition to the Everyone Orchestra.
The set began with an upbeat funk/rock groove, not unlike most of the music which Everyone Orchestra creates. Most of the music is groove based. In transition, the music moved into another area of heavy groove-centric style. Matt Butler held his directional white board up to show the crowd and musicians. “Ska” was written. This piece prompted some inspired and relaxed lyrics by Jans Ingber, one of the best when it comes to spontaneous vocals. Jennifer Hartswick, with a singing voice of pure angelic soul, soon joined in for added harmony. “Taking it easy, on a Sunday afternoon” was sung as the theme for this jam which alternated moods from ska to R&B and back again. This was certainly a highlight jam of the first set.
After a few more extended explorations with John Kadlecik and Trevor Garrod assuming singing duties on two of the jams, the first set came to a close with energy still buzzing. Second set continued to push the envelope of musical adventure. When Hartswick took a couple of trumpet solos, it was like a lesson in melody and jazz phrasing that would make Louis Armstrong smile. Ms. Law’s violin accompaniment was equally enchanting and brought the music to heights that would otherwise not be realized. One of the pieces featured some seriously intuitive interplay between Salken and Ingber on drums and conga while Mathis held down the low end with one of the finest, chunkiest bass tones on the scene today. Butler got the crowd participating with sing-alongs and howls up to the moon. Second set seemed subdued for all of about four minutes, considering that, this had been one hot show.
Encore time featured Kadlecik leading a cover of the JGB staple “That’s What Love Will Make You Do.” The tune was well sung and ended the night fittingly. At the end of the show and after most everyone had left, Ingber and Butler came down to floor to talk with some fans. I had the good fortune to speak with both Ingber and Butler about the Everyone Orchestra. “We just dive right in” said Butler, to which Ingber commented: “Instead of dipping our toes in the water, we cannonball…or jackknife,” he said with a laugh.
To which most deadheads would claim, “there’s nothing like a Grateful Dead show,” I would be inclined to say the same about Everyone Orchestra.