Trending Stories from The Marquee
You are at:Home»Brian F. Johnson»The Watergirls Put Their Rubber Boots on Again for The Lyons Project
By Marquee Magazine on March 1, 2014 Brian F. Johnson, Features, Interviews 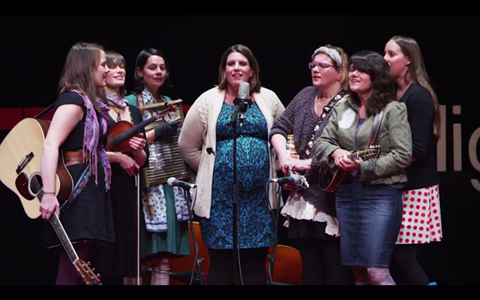 It was their first-ever show and, as it turned out, it was also the first time that they had all been in the same room together as The Watergirls. Despite a few make-shift rehearsals with different parts of the group practicing at separate  times, the first time the all-female, all Lyons-based group got together was on the stage of Denver’s Newman Center for a TEDxMile High performance, where they turned in a miraculous three-song set that sounded as if they’d been playing together for years.

In many regards, the women that make up The Watergirls have been playing together for years, in jams and various projects, but when they played that show — all adorably dressed in colorful rain boots — it was still a debut show, and all still very new.

“We were all so strangely busy and disjointed after the flood,” said KC Groves in a recent interview with The Marquee. The Lyons musician who assembled the troops, so-to-speak, for the project, continued, “So to be honest, it was really a pain in the [neck]. We never had a time when we could all be together at the same time. So when it came time to do the TEDx show, and we were all backstage in Denver — which felt removed —then, it became powerful.”

Groves had received a call from a friend who works for TEDx, telling her that the global conference dedicated to Technology, Entertainment, Design was putting together a post-flood talk in Denver and were working on getting a hydrologist or some sort of flood expert to lead the discussion. “But then they kind of thought that might be boring and they decided, ‘Let’s make it not boring. Why not get real people, from Lyons.’ So he asked me if I could put something together,” Groves said.

All of that organization, however, was being done while everything else in the ladies’ lives was completely disorganized, and Groves said that it was tough for them to even wrap their minds around playing. “Even though my house had been spared by the flood, it had been emptied out by some sweet friends, who assumed my house was going under. So it took me a while to even find all my instruments. Everything I owned was spread out from Lyons to Longmont to Berthoud, and then we were evacuated and I couldn’t even move back in. So it was a really disorganized time,” said Groves.

Despite that hectic time, the band crafted three songs for TEDx, including Groves’ “St. Vrain Waltz,” which she pointed out was written a decade ago when “the river was behaving,” Sally  Truitt’s song “Little Rain,” and the gorgeous a cappella Irish traditional, “The Parting Glass.”

“All of the material was based on river songs — water songs,” said Groves. “We wanted them to be meaningful without being morose. We had actually discussed doing the Seldom Scene song ‘Muddy Waters.’ We’ve all known that song for years, but when we listened to it after the flood, it was like, ‘Wow, that’s really what happened.’ It was very difficult listening to that song after the flood and it didn’t fit with the goal of being joyful but still meaningful.”

While the original intention was to have The Watergirls together only for that TEDx show, as it turned out, the performance caused a bit of a stir, and now The Watergirls, who will also play a gospel set at this year’s RockyGrass, find themselves at the center of a community event called The Lyons Project, which will feature multiple shows in Boulder on March 7. The Watergirls will play eTown Hall that night, as will Sally Van Meter and Eben Grace, and a Lyons super-group of sorts that includes members of The Railsplitters, Monocle and Taarka.

That same night, across town at Bohemian Biergarten and Shine, Megan Burtt, Jami Lunde, Monocle Band, Dave Watts & Friends, the Railsplitters and members of Rapidgrass will play sets as part of the Lyons Project, too. (One ticket will access both night venues, while eTown tickets are separate.)