Trending Stories from The Marquee
You are at:Home»Cover Story»YAMN Jams Together Rock and EDM for Latest, ‘Unity of Opposites’
By Marquee Magazine on March 1, 2014 Cover Story, Features, Interviews, Timothy Dwenger 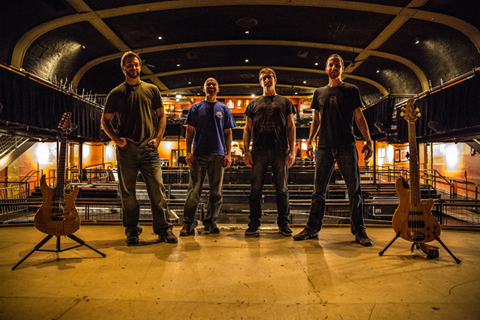 With Colorado’s affinity for EDM, as well as the area’s long and storied past with rock and roll, it’s a no brainer that a Denver band would blend the two so that they can equally tap both genres’ audiences.

Over the last eight years, YAMN has honed a sound that mashes elements of livetronica into rock and vice versa, and with the release of their first album in five years, the band is rejuvenated and ready to soldier on together on the next leg of their journey.

Founded in 2006, YAMN spent several years building a solid following through constant touring and elevated musicianship, but at the end of 2011, keyboardist and founding member Ryan Ebarb decided to pursue other interests and left the band. Ebarb’s departure led to a hiatus for the group that lasted nearly eight months.  While that might have been a fatal blow to many bands, YAMN took it in stride and bassist David “Dewey” Duart even alluded to the fact that the hiatus helped the band’s creativity. “There has been new material continuously pumping through us since our break,” Duart said  in a recent interview with The Marquee. “Though the band was stalled for a while, everyone was still writing. We have a new life in the practice room today. We work so much cleaner these days than we used to in years past.”

With Ebarb gone, YAMN first tapped Paul Evans and then Eric Blumenfeld (formerly of Denver’s Kinetix) to handle keyboard duties as they prepared to go into the studio last year. “Paul was helpful and important in getting us back on stage and starting to move forward as a band again,” said Duart. “He co-wrote one of the tracks on the record and did all the demo tracks before he left to move to Richmond, Va., but then Eric came in and just crushed 90 percent of the keyboard parts on the album.”

The result of all this writing and fresh energy is a powerful fourteen-track double album that the band has dubbed Unity Of Opposites. Recorded over six months at the stellar Scanhope Sound in Southwest Denver with Josh Fairman handling engineering and co-production duties, the first disc focuses on YAMN’s more electronic leanings, while the second is most definitely a rock record. It’s true that these two genres aren’t necessarily opposites, but the project certainly showcases two different, and equally well developed, sides of the band.  “We like to play electronic dance music, but we also like to play raging rock and roll,” explained Duart.

With this release, YAMN is leaning heavily into their next big push as a band. They’ve got a very strong keyboard player Nicolai Afanasenkov on board and are gearing up for what they hope to be national attention. “The keyboard thing has been kind of hectic for us lately, but now, with Nicolai, hopefully we can make that big push. We are planning to hit the road,” Duart said. “We are okay with the grind, that’s not an issue. But we spent five years on the road playing bars and clubs and while we made some headway, this time around we are going to take more of a strategic approach.”

The push begins with several dates on the West Coast in support of the live looping String Cheese Incident side-project EOTO and Acorn Project, before returning to Colorado for a massive album release party at the Ogden Theatre, where they will co-headline with Conspirator. “Initially, the release show was supposed to be at The Bluebird, but AEG [Live] came to us and offered the opportunity to share the bill with Conspirator and we were stoked. It’s pure excitement to get to headline that room,” Duart said.

Whatever the future might hold for YAMN and their unique approach to blurring the lines between rock and electronica, there’s no doubt they are putting their best foot forward with Unity of Opposites in hopes of spreading the word and inviting new fans to become part of their Yamnily.