Trending Stories from The Marquee
You are at:Home»Brian F. Johnson»Colorado rolls up a blunt full of festivities for 4/20
By Marquee Magazine on April 1, 2014 Brian F. Johnson, Features, Festival Coverage, Nessa Fried 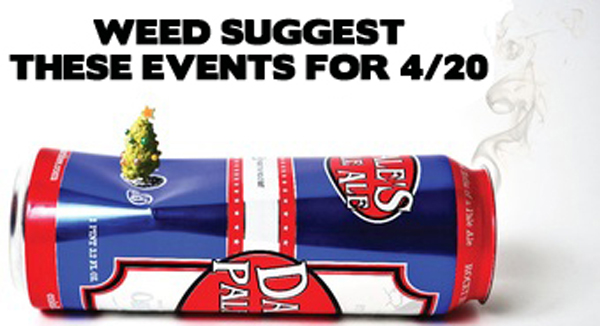 With the legalization of marijuana in Colorado, this year’s 4/20 celebration is about to be the most extravagant one yet. Now that anyone over 21 can walk into a recreational marijuana store and purchase weed legally, this underground holiday no longer has to be kept quite so underground.

In addition to the weed-related festivities, Colorado boasts local musical performances that keep the celebration going long after the countdown until 4:20 p.m. has passed. For a complete listing of 4/20 shows, please refer to our concert calendar.

HIGH TIMES returns to Denver for the fourth year at the Denver Mart. This two-day trade show/EXPO includes a range of vending booths from glassware and clothing to grow equipment and artwork. In addition, the Cannabis Freedom Trail will take place, in which event attendees are invited to sample products from Denver’s participating marijuana shops. Participants will vote for their favorite, and on Sunday the shop with the most votes will win the People’s Cup.

Musical performances associated with the event will take place at Red Rocks Amphitheatre on both nights. Saturday night, April 19, will feature Mac Miller and Slightly Stoopid. Sunday night’s 4/20 proper performance at Red Rocks will be headlined by the headiest 4/20 Easter Bunny, Snoop Dogg, with support from Wiz Khalifa. Ironically, the famed Red Rocks will host Easter Sunrise Service at 6 a.m. and Snoop and the Cannabis Cup  just 12 hours later — maybe the biggest indicator yet that pot is going mainstream.

Fresh off  his Cold Crush Tour, Alex Botwin, better known as Paper Diamond, will be accompanied by Kaytranda and Branchez at the Ogden for the event Colorado Cold Crush. In addition to heading overseas to perform in London this summer, the Colorado native plans to perform at festivals all over the country, including Mysteryland, Electric Forest, Free Press Summer Festival, and Spring Awakening Festival.

Festival 64 is a three-day event with a lineup including artists such as Tiger Party, Ultraviolet Hippopotamus, DrFameus and Genetics. Tiger Party will feature David Murphy, formerly of STS9, while DrFameus will be featuring Allen Aucoin of the Disco Biscuits.

Jam band UV Hippo has been praised for their third album Square Pegs, Round Polls, which was voted “2011 Studio Album of the Year” by the Home Grown Music Network.

:: Cervantes’ Masterpiece (Outdoors – In the streets) ::

Leftover Salmon’s Still Smokin’ will be taking over the streets of Denver on 4/20, at 4:20 for $4.20. The festivities will include two full sets of Salmon’s “Polyethnic Cajun Slamgrass,” accompanied by special guest Bill Payne of Little Feat. To supplement the live show, there will be outdoor bars, various vending and an Easter egg hunt. In May of 2012, Leftover Salmon released their first studio album in eight years, Aquatic Hitchhiker, which is the band’s first album comprised of all original material. The album also features the newest addition to the band, 29-year-old banjo player Andy Thorn.

This newly-formed hip-hop group from Flatbush, Brooklyn is part of an East Coast hip-hop movement known as “Beast Coast.” The group has collaborated with artists such as ASAP Rocky, Juicy J and Jim Jones.

Flatbush Zombies released their second mix tape, BetteroffDEAD at 9:11 p.m. on September 11 of last year. In February, the group announced they will soon be coming out with a new EP, It’s All A Matter of Perspective.

Legendary saxophonist Karl Denson has been rocking crowds for nearly three decades. After touring for 15 years, Karl Denson’s Tiny Universe latest effort New Ammo debuted on Slightly Stoopid’s record label, Stoopid Records in February of this year. The band is back on the road this winter and set to perform 20-plus shows, which already included a three-night run at the new Brooklyn Bowl in Las Vegas, along with the Jungle Jam Festival in Costa Rica.

All The Yuzzz’s Productions, OG Productions and Soleil Unite present Abracadabra, a live music and art event lasting from noon until 4:20 a.m. The festival will feature two stages of music, a Cannabis Cup Challenge, live art installations and the first ever Weedster Bunny to celebrate Easter Sunday.

One featured headliner will be Reid Speed, also referred to as the Bass Boss. Destroying dance floors for over a decade, she is regarded as a pioneer of the multi genre bass music movement. She has founded her own award-winning label, Play Me Records, which has helped kickstart the careers of names like Dillon Francis and Figure. Speed has made her way as a chart topping producer and continues to be a fan favorite DJ.