Trending Stories from The Marquee
You are at:Home»Features»Grant Farm to release latest, ‘Plowin’ Time,’ in DSD and 200 gram vinyl formats
By Marquee Magazine on April 1, 2014 Features, Interviews 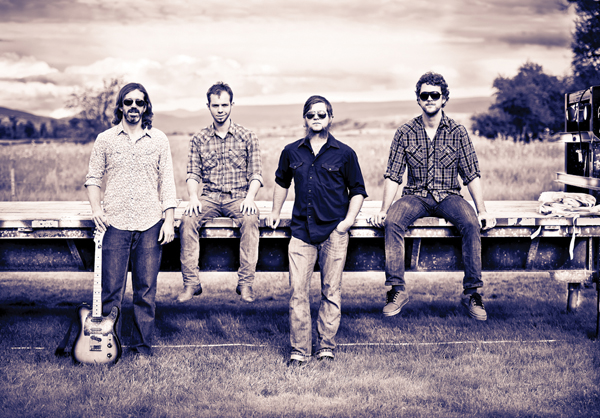 Most musicians are audiophiles by default. Wanting their music to sound its absolute best isn’t a novel concept in any regard. But more often than not, time and money thwart musicians’ plans to turn out audiophile-level recordings. But for Boulder’s Grant Farm, when they stepped up to record their second full-length, a big part of it became a learning experience on just what it takes to produce high-end audio recordings, and the resulting Plowin’ Time elevates the band’s solid twang-rock sound to enviable levels.

Grant Farm’s Tyler Grant is one of the premiere six-string slingers on the Front Range. Grant’s move to Nashville from California in 2003 put his formal music studies to work, and in 2005 he was called to Colorado by Leftover Salmon’s Drew Emmitt, where he took a role first in the Drew Emmitt Band, and later became part of the Emmitt-Nershi Band (which featured Emmitt and The String Cheese Incident’s Bill Nershi).

All the while, Grant was still gaining accolades for his flat-picking on acoustic guitar. When he eventually left the Emmitt-Nershi experience he did so with a plethora of knowledge and an itch to play his own songs, and Grant Farm was formed.

“I started playing guitar with the Drew Emmitt Band in 2005, and then in 2008 when the Emmitt-Nershi Band started out, I jumped on,” said Grant during a recent interview with The Marquee. “Billy and Drew taught me how to put on a show and how to relate to your fans. Both guys also taught me how to bring it every night, even if you aren’t feeling great. They felt, as entertainers, that they have a responsibility to go into a gig with everything they have. They taught me a lot about the business side of music as well.”

When Grant decided to start singing songs of his own, he took the teachings of Emmitt-Nershi, and bandmate Andy Thorn into Grant Farm. Grant wasn’t necessarily looking to be a frontman, but he was looking to have his songs in the forefront. “I had been a sideman for as long as I had been playing guitar, but I realized at some point I was going to have to start my own band, because I had songs of my own that I wanted to share,” said Grant.

The project started simply, but quickly grew into something bigger. “Grant Farm started with just Andy and I as a duet,” said Grant. “I was playing acoustic guitar. Then it evolved into a progressive bluegrass band. When we had our first gig with a drummer, I decided to bring my electric guitar along. I love playing acoustic, and that’s what I play when I am home, but when I want to get a dancing crowd going, I’d much rather be playing electric. I wanted Grant Farm to play good rootsy rock and roll, which was a revolutionary idea at the time (laughs). This was like throwing the long ball. I could be making a living playing acoustic and teaching workshops, but I wanted to start the band that I thought had the potential to go the farthest. That’s what Grant Farm is to me, just throwing the long ball and going for it.”

And part of that deep pass is coming at Plowin’ Time with a collaborative spirit and an attention to detail. “This album is way more of a band effort than our first album was. I put the band together as we went for the first album, and now we were able to collaborate as a group. The album is shared between the two frontmen in Grant Farm, myself and bass player Adrian Engfer. He and I share the lead vocals. We kind of go back and forth, his song-my song, through the whole thing,” Grant said. “It’s much less about me now, and way more about Grant Farm. We rehearsed as a band, put all the music together as a band, and you can really hear it on the final product.”

Attacking the album as a band gave way to the cohesive and natural sound of the songs, but high-end equipment and lots of labor resulted in a staggeringly rich recording. “We recorded, mixed and mastered the album on DSD (Direct Stream Digital). The studio we recorded at, Immersive Studios, is one of the only studios in the world that can record this way. We went into the project with fidelity in mind. We are releasing a DSD pure version of the album, and we are also releasing it on 200 gram vinyl. For the vinyl, we mastered the DSD onto tape, and then made the record off of that. We found the best lacquer cutting guy we could find to cut the discs, and then we found the best record pressing guy to press the record. I can’t tell you how excited I am to pick up the test pressing tomorrow. Every step in this album was meant to produce a true high-fidelity sound. I want listeners to be more aware of sound quality, and I hope by listening to this album on vinyl they can hear the way these songs were meant to be heard.”

• New Riders of the Purple Sage