Trending Stories from The Marquee
You are at:Home»Cover Story»Anders Osborne to Headline Burning Can Beer Fest in Lyons
By Marquee Magazine on May 1, 2014 Cover Story, Features, Interviews 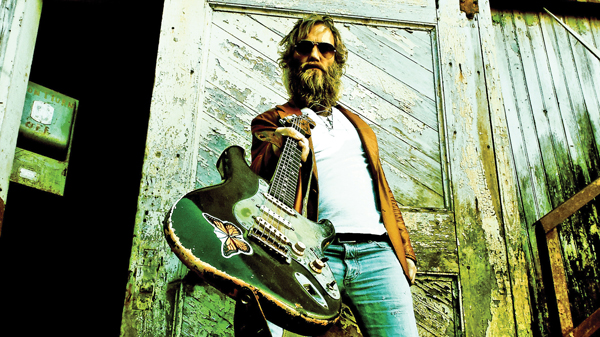 When a community goes through a disaster together, strength blooms from destruction. Bonds form as people look up and wipe their brows, smiling at their neighbor toiling next to them. Tasks become a team effort, tenacity becomes the foundation of daily life. After all the damage is assessed, and the road to recovery begins, the hope comes from realizing you aren’t in it alone, and that you couldn’t picture yourself anywhere else, come hell or high water… literally.

The town of Lyons, Colo. was devastated  by a flood last September, demolishing bridges, roads and homes. Lifetimes of belongings and keepsakes were lost, but hope always remained. Once the rain stopped, the work began. Mud, several feet deep, was cleared out buckets at a time. Bohn Park in Lyons was underwater, and once it finally receded, the area was used to stage refuge for removal. Now, nine months after the flood, the once destruction-ridden Bohn Park will be hosting Oskar Blues Burning Can Festival and the Lyons Outdoor Games, with the majority of the proceeds benefiting Lyons Flood Relief.

Headlining the festival is a musician who is no stranger to the devastating effects of a storm, New Orleans guitarist Anders Osborne.

Osborne was gigging on the West Coast when Hurricane Katrina hit the Gulf Coast in 2005 and he recalled the hope that sprung from the horror, as he frantically tried to make plans to evacuate his family before communications were cut off to the city.

“As soon as we heard evacuation was mandatory, I had to make some phone calls from San Fransisco to get all those storm preparations done. We made a plan, and I met my family in Nashville,” Osborne said during a recent interview in New Orleans with The Marquee.

For some, the exodus from New Orleans was final, but not for Osborne. His philosophy is that New Orleans is a city with mystical power, and it calls certain people to it. After Katrina, Osborne gladly heeded that call. “I snuck into New Orleans three weeks after the storm,” he said. “All the roads were blocked and you weren’t allowed in. The military was guarding and patrolling the entire city. All the trees were down. All the grass was dead. All the birds were gone. It was extremely quiet, and there was a horrible stench. All the sewage, animal carcasses, rotting food — it was indescribable, and permeated everything. The silence and the stench is what I remember most about returning. It was an absolute foreign experience. We had no reference on how we were supposed to feel or think. I didn’t see a worm in the soil for months. Everything was dead. It isn’t just damage to your house, it’s destruction of everything around you.”

Osborne’s imagery of his return is but one brush stroke in painting the picture of just how hard New Orleans was hit. The prognosis for the city was not good, but as its displaced residents returned, New Orleans began to regain some of its strength. “After that first time — three weeks after Katrina — I continued to come back to New Orleans every weekend and work on the house,” Osborne said. “There was no electricity and it was hot as hell. My friend was working on his place uptown, and he had a generator, so I would go stay up there at night. My fourth weekend coming back to town we started playing at the Maple Leaf and Le Bon Temps Roulet with a generator. We would play for the National Guard, the police, the rescue workers and the few people who had stayed in New Orleans.”

The return of the people added strength to the city, but the return of music gave New Orleans its voice back.

Explaining his own experiences, Osborne drew parallels to what Lyons and other communities learned by going through the flood of 2013 —or for that matter, any community that’s gone through any natural disaster. “The camaraderie was there from day one,” said Osborne. “The people that returned were so committed to being here. We were staying, and you couldn’t make us leave. We didn’t care if there was only 25,000 people in the city. We ran basic errands together and helped each other out. The community got ten times closer, and this city was close to begin with. The whole city became a team. We came together, but there wasn’t any kind of joyous ‘Kumbaya’ feeling. It was fucking miserable. The hope really comes from the fact that everyone who stayed absolutely loves everything about New Orleans. Everything about the city — the people, culture, music food, history — everything. We all got a special feeling from rebuilding the city we love, as hard as it was. We found a common ground and took care of the city. We always do. The hope came from knowing our home is one of the brightest gems on the planet, and we would do anything and everything to care for it.”

While there is no comparing the magnitude of damage in New Orleans after Katrina to the destruction in Lyons after the flood last year, Osborne’s thoughts resonate with anyone who has weathered any major storm. Like the residents of New Orleans, those who live in Lyons adore every square inch of their special little hill town. They love every bend in the St. Vrain, every leaf on every tree, every rocky hillside, and most importantly, each other.