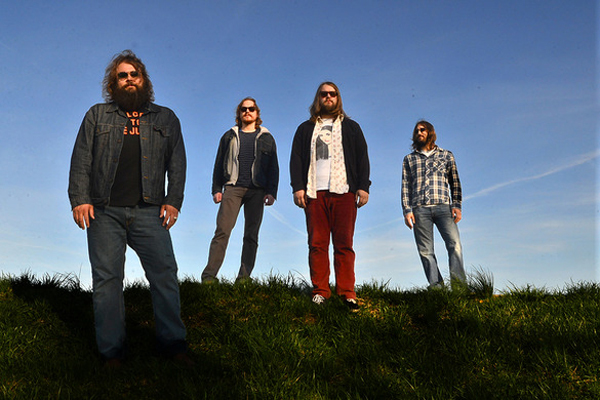 When bands and labels part ways there’s usually some sort of drama involved about the demise of the relationship.

But for Cincinnati’s Buffalo Killers, when they told their label Alive Naturalsound Records that they were entertaining an offer from the Warner Music Group subsidiary Sun Pedal Records, instead of drama, the band received help, guidance and their previous label’s blessing to take the deal. “They actually sat down with us and helped us go over the contracts,” said Buffalo Killers’ bassist/vocalist Zach Gabbard during a recent interview with The Marquee. “When we signed up with Alive they told us their goal was for us to eventually go on to a bigger label, and so to me, I don’t look at it as us leaving Alive, I see it as us gaining Sun Pedal. It’s like we have two labels now, and we’re going to continue to work with Alive. Hell, we might even have something with them by the end of the year.”

Buffalo Killers, which also includes Gabbard’s brother Andy on lead guitar and vocal, and long-time friend and drummer Joe Sebaali, has existed as a power trio since their inception in 2006, but as they geared up for their latest release Heavy Reverie, the three-piece added a fourth member, Sven Kahns on guitar and lap steel.

“We kind of have a formula for how we do things and there’s a certain amount of Buffalo Killers that we try not to fuck with,” said Andy Gabbard in a separate interview with The Marquee. But, in addition to adding Kahns to the mix, the sort of classic, sort of psychedelic, sort of southern rock group headed  to the studio knowing that this album would be their most heavily produced album to date. “We’ve never made a record like Heavy Reverie and we will never again make a record like Heavy Reverie, because we are always looking to make things different. And this is a well oiled album,” sadi Gabbard.

So with that idea in mind of “not fucking” with the band, while also throwing a slew of curve balls, the  band headed to the studio with producer Jim Wirt (Hoobastank, Incubus), and Andy Gabbard said that the addition of Kahns to the band helped the recording immensely. “It changes things sonically for the better. For our other albums I’d always have to go back and add an extra layer of guitar. We recorded live, and now with Sven there, I can do all of the leads live in the studio and get a good feel. The best feeling lead I can get is always going to be when I can play live, and on stage now, I can just lose my shit,” Gabbard said.

Buffalo Killers are doing some touring including a West Coast run that will put them at the Freaks for the Festival II with the Chris Robinson Brotherhood and Howlin’ Rain at the quirky Pappy and Hariet’s Pioneertown, just outside of Joshua Tree National Park in the California desert. But Zach Gabbard said that if he and his bandmates had their way they’d avoid the road and spend more time in the studio. “Home’s too good. If there was something to run away from at home we would, but I have two children and Andy has a baby and another on the way. You know, Alive never pushed us to be on the road. If I’m not pushed, I’m just going to stay put and make records,” Gabbard said.

Likewise, the band doesn’t have lofty rock star aspirations, and both brothers agreed that while Heavy Reverie is some of the most approachable and slick Buffalo Killers material to date, that the goal isn’t really to make any sort of commercial radio effort. Zach pointed out that radio isn’t as important as it used to be and chuckled as he envisioned the band taking on any sort of “main stream” commercial success. “We eat too many cheeseburgers to be on MTV,” he laughed.

“We just want to put out as many records as possible,” Andy continued. Heavy Reverie comes out May 13, with vinyl following a few weeks later, but already, even before they’ve officially released this album, they have another one ready to go. “We recorded an album that we wanted to release for Record Store Day, but due to some scheduling issues it didn’t work out for us to get it out on time. But we have this album sitting there and waiting and we might end up releasing it on Black Friday Record Store Day.”