Trending Stories from The Marquee
You are at:Home»Features»Fred Wesley, One of the Forefathers of Funk, Joins Rocky Mountain Power Jam
By Marquee Magazine on June 1, 2014 Features, Interviews 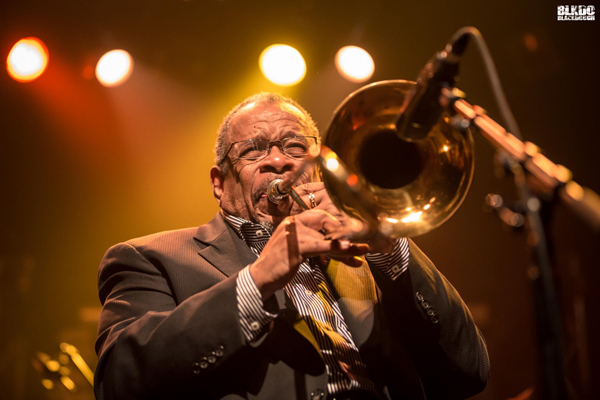 Trombonist Fred Wesley is one of the funkiest men who has ever walked the planet. That’s not hyperbole. His work with Ike and Tina Turner, James Brown and The JB’s, and George Clinton’s Parliament-Funkadelic projects put him in the position of being a forefather of funk.

But while his career highlights put him on the same page with those greats, Wesley humbly suggests that he’s happy enough to have been along for the ride.  “The fellas I am playing with at these shows in Colorado; George Porter Jr., Bernie Worrell and  Leo Nocentelli, they created funk. They are the epitome of funky music,” Wesley said during a recent interview with The Marquee.

While Wesley may not personally include himself on a list of funk icons, it’s clear that he’s on it — even if in his early career it seemed that he might take another route. That is, of course, until he met and played with The Godfather of Soul himself, James Brown. “Before I started playing with James Brown, the first time, I had my own band while I was in the army, I guess you would call it an area band, or a local band,” he said. “We would go play gigs at night, but could only go so far, since we had to get back to base before morning. After I got out of the army, I moved back to Mobile, where I am from. Then that band started playing in Mississippi and Florida — widening the area. I was playing with that band until the Army took them all up during the Vietnam War. After that I played around Mobile, and then hooked up with James Brown. My friend was playing with James, and he asked if I wanted a gig. I did, and I wanted to get out of Mobile and get people to hear me in the big cities. My first love was jazz, and I wanted to get discovered as a great jazz trombone player. I didn’t really want to play with James Brown, but it was a way out of town.”

Wesley was apprehensive about the Brown gig because, as a jazz player, he was nervous that he’d have to change his style to fit in but as it turned out, he said, he and Brown’s styles just flowed well together. “My style didn’t change once I started with James, it just melded into James Brown style. I could play funk solos before James, we just didn’t call it funk back then. Once I started playing with James, people liked it — a lot. So I got locked in with James.”

Not only was Wesley locked in with James Brown, he got sucked into the funk, and became a key player that helped to form the genre. While their styles may have worked well with one another, Wesley didn’t feel their personalities clicked too great at the time. “We disagreed on certain things; like rehearsals, and how to rehearse tunes. So he fired me — and I quit. Then I made the move to Los Angeles to be a jazz trombone player, but when I got there and realized there was already enough jazz trombone players in L.A., I took a gig with Ike and Tina Turner’s band. So there I was, back in the funk. It was a great band, but we weren’t making much money, so when Mr. Bobby, James Brown’s manager, came and asked me if I wanted my job back, I said yes. Mr. Bobby told me James was going through some changes. He had hired Bootsy Collins, and Maceo Parker had left the band. Bootsy was the band leader, but he was getting ready to leave. I went back into the band, and that’s when James Brown’s music started to really change — started to get really funky. I helped James arrange ‘Get on The Good Foot,’ ‘Hot Pants,’ ‘Payback,’ and stuff like that.

After Wesley’s two tours of duty with Brown, he stepped onto The Mothership with George Clinton. “My transition over to George Clinton’s bands was very natural,” said Wesley. “ I had played with Bootsy for about a month in the JB’s before he went with George Clinton. I got tired of James Brown, again. I mean, James Brown was a very hard man to work for. It was very difficult. I had taken all I could take, and that’s when Bootsy reached out to me about joining up with George Clinton, so I did. My role with James Brown was an arranger. A good deal of the music was me. Of course, James Brown adjusted it and added his style, but it was my music. ‘Doin It To Death,’ ‘Breaking Bread,’ ‘Get On The Good Foot,’ those were all me and James. When I started playing with Bootsy and George Clinton, my role was much different. George Clinton orchestrated the costumes and the concepts, all I did was the horns. I mean, I did some outrageous horns — the craziest horns I could think of, to go along with the crazy bass lines and the costumes. I was just adding to what was already happening,” said Wesley.

While there may have been a time when Wesley stood on his own in the funk world, these days, he’s surrounded by a host of musicians that are continuing to preserve and promote the genre. Bands like Lettuce, Karl Denson’s Tiny Universe, Ivan Neville and George Porter, Jr. have blended the sound into the jam band scene and expanded it exponentially from Wesley’s roots.

Wesley changed the scope of the instrument, and paved the way for others to take the instrument in different directions as well. “I played with Trombone Shorty the other night in New Orleans,” said Wesley. “Now what he plays is rock trombone. He does something totally different with his instrument. He is a great trombone player, and he can play some funk, too. He is the next generation. He has continued on with the trombone. All those guys, they have taken funk and expanded it.”

The Icons Of Funk ::