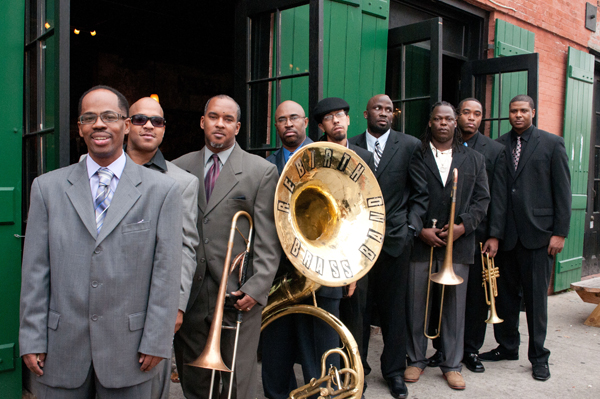 Rebirth Brass Band is about as New Orleans as it gets. When the group formed in 1983, with original members brothers, Philip (tuba) and Keith Frazier (bass drum), Kermit Ruffins (trumpet), and other Joseph S. Clark Senior High School Marching Band members, the brass band sound was fairly contained to New Orleans. What happened after Rebirth is history. Literally.

Rebirth Brass Band revived the traditional New Orleans brass band sound, put their modern touch on it, and spread the sound throughout the globe. They brought brass outside of New Orleans, and it would be hard to find any touring brass band that doesn’t look at Rebirth as the group that brought brass beyond boundaries.

“Rebirth Brass Band was born out of our high school marching band,” said drummer Keith Frasier during a recent interview with The Marquee, where he explained that their summertime hobby turned into a Grammy winning career.

“My brother Phillip put a group of guys together to form a brass band, so he picked people from the marching band we were in to join him. We learned some traditional songs like “When the Saints Come Marching In,” “Mardi Gras,” “Big Chief,” stuff like that. We couldn’t get any gigs in bars because they were serving alcohol, and we were too young, so we decided to go down to Bourbon Street in the French Quarter and play for tips. We did that for a whole summer. We would get together at 3 p.m. every day, and go out and play for tips. And here we are now, 30-something years later,” said Fraiser.

With more than three decades behind them, Rebirth Brass Band isn’t exactly on a street corner playing for tips anymore, instead the Grammy winners now easily pack New Orleans’ famous Tipitinas as well as other venues around the globe.

When Rebirth first started, they had both feet planted firmly in tradition, but they soon began adding their own distinct flavor to their performances, taking them far beyond a nostalgic throw-back type of act. “The traditional brass band stuff was what we started with playing on the streets of the French Quarter, but we were young, and we started incorporating songs we heard on the radio into our performances. Hip-hop and reggae especially. This was the late ’80s when we started bringing the songs we listened to into the performance, and we still do it today. It works,” Frasier said.

And the diversity of the audience at a Rebirth show is just one of the indicators that proves how well it works. One foot in tradition, one finger on the pulse of current popular sounds. By always mixing in old and new, the Rebirth sound becomes timeless in its own way, and draws all types of music lovers to the party. According to Frasier, “You never know what we are gonna play.”

Rebirth brought brass instruments to the forefront, at a time when it wasn’t cool to be playing trombone. They helped make brass cool, and that simple fact influenced local New Orleans society immensely. After Rebirth, young boys started picking up instruments instead of footballs, and that social impact paved the way for artists like Trombone Shorty, who appears on Rebirth’s newest album Move Your Body, and Hot 8 Brass Band. That social influence is evident to this day, because in New Orleans, there is no such thing as a “band geek.” Bottom line: brass attracts ass in the Big Easy.

“When the band was first formed, our name wasn’t Rebirth, that name was suggested by someone in the audience at one of our shows,” said Frasier. “He ran a youth organization called Rebirth, and told us that our band was like a rebirth of traditional brass band sounds. So we changed our name. The name fit the music we were playing at the time. Young people weren’t really getting into brass bands, or into that type of music. Now it’s cool to play a brass instrument. Very cool. Back then, guys who played sports would look at you as not being cool because you played an instrument, but now because it’s so popular, even guys who play sports want to pick up a horn and play.”

If you are born in New Orleans, brass bands are the soundtrack to your life. But it isn’t like that anywhere else in the world. In the Crescent City, brass bands ring in new life, and escort the dead to their graves. Frasier expounds, “From the cradle to the grave, and everything in between, it’s there. That’s why young kids down here can pick up playing brass so quickly. I see kids doing stuff you wouldn’t expect, and with no training. It’s just because they have had brass band music around them all their lives. It’s actually in them.”